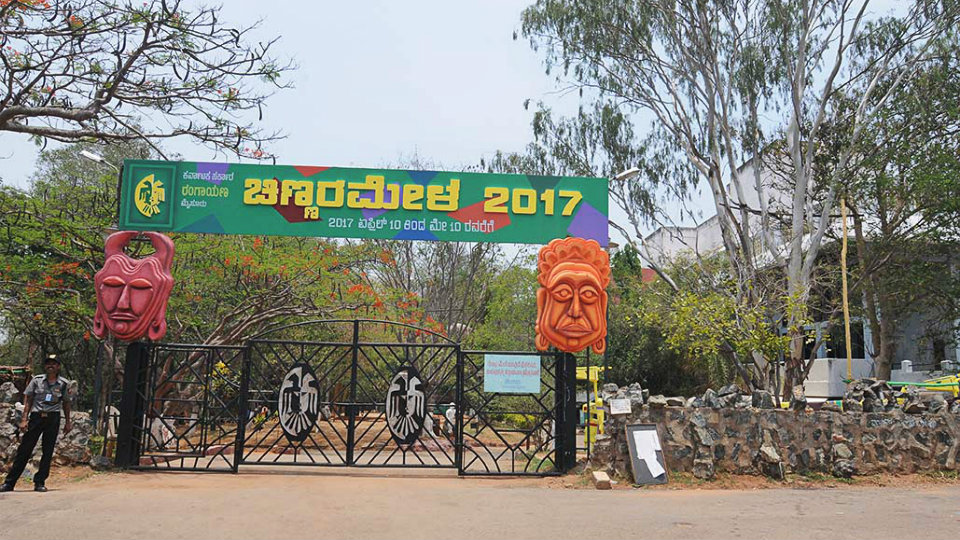 Come April, Rangayana premises is a beehive of activities as children take part in the annual Chinnara Mela and enjoy their summer holidays by indulging in creative arts taught to them by resource persons at the renowned theatre repertory.

This season, the summer sun is soaring up with the highest of temperatures making it unbearable to step out for even a minute. But come what may, this is every kids favourite season, all thanks to summer camps like Chinnara Mela that are not just entertaining but also educative for kids.

Rangayana, in an effort to bring children close to theatre, has been conducting ‘Chinnara Mela’ since 19 years. During the month-long camping, little ones get to enjoy and indulge in a variety of interesting activities, with the main focus being theatre.

Chinnara Mela was started in the year 1997 when C. Basavalingiah was the Director of Rangayana. It has become popular not only among Mysureans but also among the residents of Mandya, Chamaranagar and even Bengaluru.

Every year around 450 children partake in the summer camp and get introduced to nuances of theatre and other activities involved in a very unique way by a bunch of talented artists. What adds to the beauty of learning theatrical activities at this fun camp is that the children get to enact a beautiful stage play as part of the camp’s finale, which their parents will get to witness and feel proud of.

Once the camp starts, the children are divided into 10 groups which are given different names and a teacher from the Rangayana Ranga Shikshana Kendra who is appointed to each group to carry out the daily activities.

The classes commence from 10 am every day with all the 450 students being taught warm-up exercises and body movements by Senior Rangayana artiste Mime Ramesh, who is the Chinnara Mela director. This is followed by regular classes conducted by both senior and junior artistes. 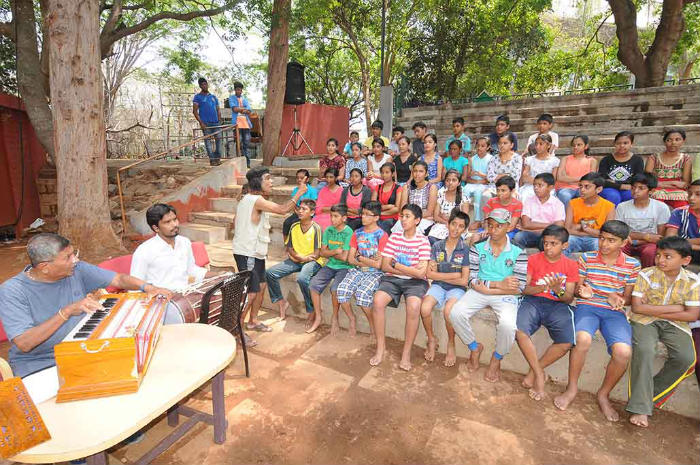 Similar to various festivals conducted by Rangayana with different themes, the Chinnara Mela is also theme based every year. Children are enlightened about various subjects depending on the theme for the year. In the previous years, the summer camps have been conducted on topics such as ‘Grama Bharata’, during which the children were enlightened about rural India, culture and tradition. They were also introduced to rural games and activities. Later, at the Chinnara Mela based on the theme ‘Buddhana Nadinalli Makkala Loka’, the kids were taught about the importance of peace and harmony apart from introducing them to Buddha. Though there are similar camps organised by various institutions, Chinnara Mela holds its own special place in Mysuru. The summer camp is designed in such a way that children are made to understand importance of the roots of life. They are enlightened about various personalities including Buddha, Basavanna, Dr. B.R. Ambedkar and several other social reformers who preached peace and harmony among various communities in the past.

This year, Rangayana has organised various programmes to make the summer camp more interesting. Apart from the usual dog show by the Police Department, there is an interaction on Food and Health, Demonstration from Fire Fighters, concert by singer Vasu Dixit, storytelling by Dr. H.S. Ramachandre Gowda, folk dance and group dance by Vid. Kripa Phadke and troupe, talk on equality on the occasion of Basava Jayanthi, magic show by Suma Rajkumar, nature talk by naturalist Manu, talk on historical buildings in Mysuru and much more. 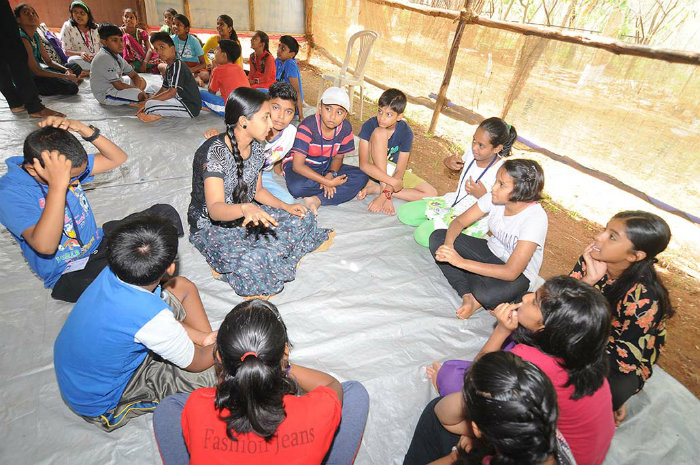 Rangayana also attracts a lot of volunteers who visit the place to lend their hands during summer camp. At a time when life has become mechanical and none have any time to spare for others and have also been losing out on human values, children here are subjected to various activities which take them away from their modern world; way too away from the electronic gadgets like mobile phones, television sets and video games that the little ones are constantly glued to, mostly due to lack of attention.

No wonder, while Chinnara Mela is open for children in the age group 7-14 years, those who have crossed 14 years of age and had previously participated in the mela are more than happy to participate as volunteers.

Rangayana provides them with such rustic environment which pulls kids towards the mela year after year.

To give it a more rustic look, the classrooms are built using coconut frond and bamboo, which also bring them close to nature. To teach them the importance of nature, the kids are also made to plant saplings, which creates an awareness on the importance of trees and greenery to lead a healthy life. 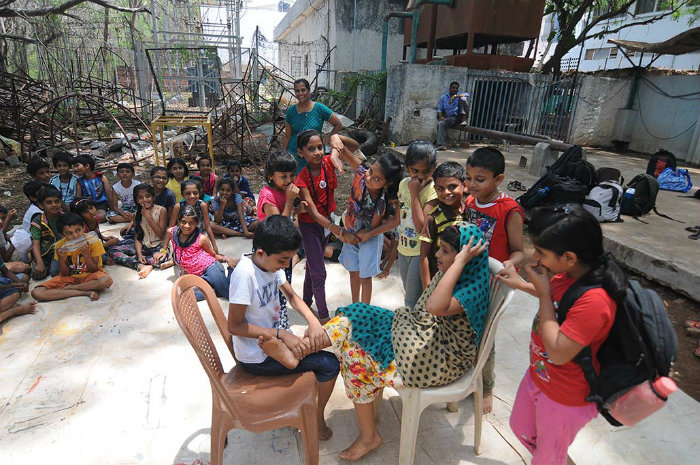 Senior artistes and the Director of Rangayana personally select the children’s plays, which are enacted by the students of Chinnara Mela to mark the valedictory of the camp. The plays are staged at the professional level as they are prepared by professional artistes at the theatre repertory. A large number of audience including the parents throng Rangayana to watch their children perform on stage each time.

The last part of the Chinnara Mela is the Okuli, which is organised to mark the valedictory of Chinnara Mela. Children at this time get to enjoy this event similar to holi celebrations smearing colours at each other and dancing in the waters while the fire-fighters demonstrate fire-fighting mechanisms to mark the end of the Mela. Not to forget there is also the ‘Santhe’ (flea market) which is organised at the Mela during which children come with various items like vegetables and snacks to sell them in the market. This is only to give a sense of how market functions. 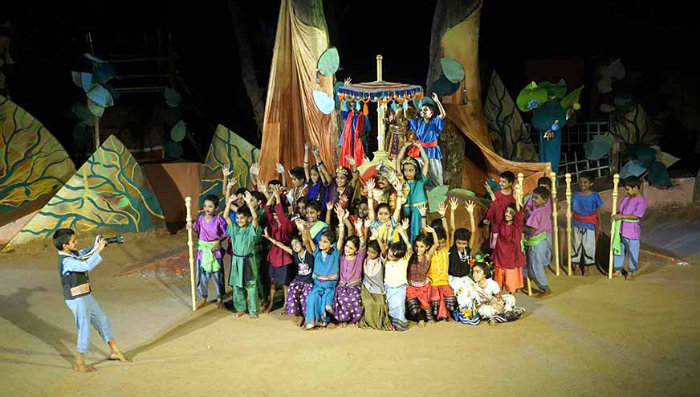 What next after Chinnara Mela?

After the Chinnara Mela, Rangayana opens its door for amateur theatre groups. Various amateur groups from Mysuru, Bengaluru and other parts of the State are invited to stage plays on weekends when Rangayana artistes are on a long holiday.

Later, soon after the colleges reopen after summer vacations, Rangayana reaches out to various colleges across the city and lends its expertise to teach students the nuances of theatre. After a month training, Rangayana organises ‘B.V. Karanath College Theatre Festival’ during the students from each participating college stage plays which are directed by the senior Rangayana artistes.

The Navarathri Rangotsava also attracts a lot of theatre buffs to its fold with Rangayana artistes staging plays on all nine days. This apart, Rangayana also honours artistes, senior theatrists and folklorists in recognition of their contribution.

But, the most awaited of all is the Bahuroopi National Theatre Festival which is held during the month of January every year.

Policemen controlling long queues – either for a cricket match or for movie tickets or at a place of worship – is a common thing. But an orderly crowd waiting patiently for their turn for hours together just to obtain an application form is something rare. That too if one has to wait for the application form a day before it is issued!

They arrived at Rangayana at 8.30 pm and spent the entire night on campus. Seeing the crowd the next day, some Policemen arrived to maintain order in case of trouble. However, what they witnessed was a systematic crowd that ensured the application issuance process was incident-free.

Parents had to come one day early as many feared that they would not get the application forms as there have been examples of many parents returning empty handed despite standing in queue a day in advance.

It was 10.30 pm on April 2 when S. Habeebulla, a resident of Rajivnagar and Producer with Regional Institute of Education (RIE) arrived at Rangayana premises. He was surprised to see a few parents who had already queued up in front of the closed Rangayana gates for the applications. He was one among the parents who wanted an application form to admit his son to the summer camp.

With only 300 applications reserved for the general public, Habeebulla, along with a few other parents, decided to make a list of people who had come for applications forms. At around 4 am the next day, the number had already crossed 300 and it touched 450 by 6 am. 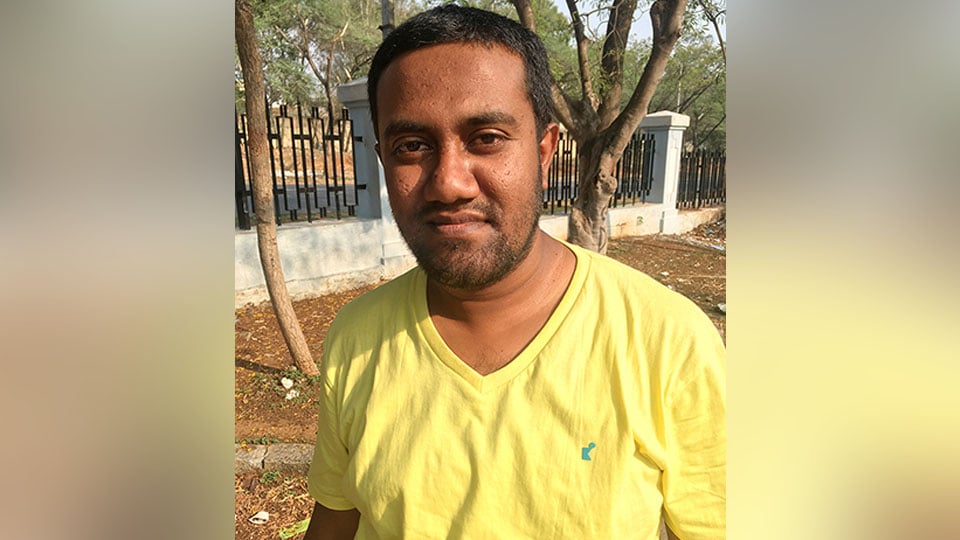 To ensure that only genuine people stood in the queue, Habeebulla took regular attendance of all 450 people who had registered their names. Each person was given a number according to the time of their arrival and when the numbers were being called the concerned person had to shout his name. If the name mismatched with the list, the person had to leave the queue. Since all parents had come to a consensus, it was easy for Habeebulla to execute the plan.

The next day when the gates of Rangayana opened, people stood in the same order as it was mentioned in the list and collected the application by paying the prescribed fee.

Speaking to Star of Mysore, Habeebulla said, “We cannot depend on the Police for small issues like these. As responsible citizens it is our duty to see that things are done without complications. It is only to show what people can do when they come together.”

When asked what made him do such a thing, he said that when he was working at Educational Multimedia Research centre (EMRC) in Bhubaneswar, Odisha, he used to find it difficult to book Tatkal train tickets to Mysuru as local residents would push around people who stood in overnight queues. There have been times when Habeebulla has travelled from Bhubaneswar to Mysuru with unreserved tickets.

Later, Habeebulla decided to take the help of Railway Protection Force personnel at the reservation centre in Bhubaneswar where a similar successful list was made to help travellers book their tickets.

While Habeebulla has played the role of a responsible citizen, it is up to Rangayana to take similar initiatives at least from next year for a hassle-free application distribution.