Home » Feature Articles » World is a Stage for Vasundhara 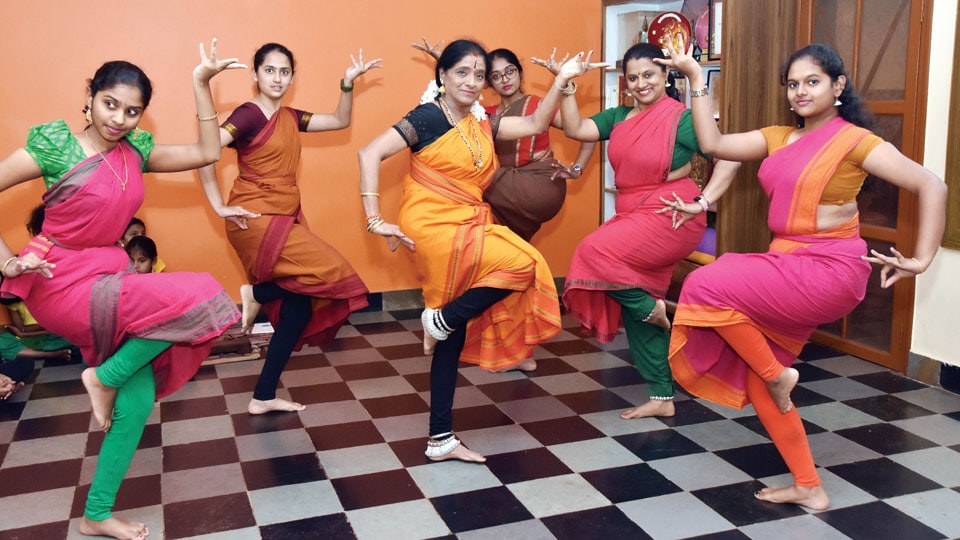 World is a Stage for Vasundhara

A danseuse who mesmerised rasikas for decades and raring to go

Established in 1986, Vasundhara Performing Arts Centre (VPAC), Mysuru, has grown from strength to strength in grooming hundreds of students who have become exceptional dancers. The Centre, led by the most charismatic Dr. Vasundhara Doraswamy, an epitome of Bharatanatyam, has produced a number of dancing gems and has taken this Indian dance form across the world.

Vasundhara’s journey is quite fascinating. A small-town girl, who was born in Moodbidri to P. Nagaraj and Varada Devi, went on to become one of the most celebrated danseuses.

“My entry into Bharatanatyam was at the age of four. My parents, who identified my talent decided to admit me to a dance class. Initially, I was guided by Muralidhar Rao from whom I learnt Kathakali and a year later, I won a gold medal in a State-level competition. There was no looking back since then and I continued my training under Rajarathnam Pillai”, recalls Natya Mayuri Dr. Vasundhara.

It has been over 65 years since Vasundhara tied the musical anklet (Gejje) for the first time. Since then she has served the art with dedication and devotion. Her talent was such that people would get glued to their seats while watching her perform.

When ‘Mysore Mama’ was smitten

Vasundhara credits her late husband H.S. Doraswamy, ‘Mysore Mama’ as she calls him affectionately, for encouraging her to continue dancing after marriage. Doraswamy was an art patron.

“The first time I met him was at a college youth festival. He was a judge at a music competition and I had come to Mysuru to represent my college. In fact, I won the gold medal for three continuous years and that impressed Doraswamy, who later proposed to me. But my father did not agree for our marriage because of the age gap of 22 years — I was 16 and he was 38,” says the dance guru.

In fact, it was Doraswamy who introduced Vasundhara to Mysuru. It so happened that during the college youth festival, the judges decided Vasundhara — the reigning two-time gold medallist — as the winner for the third time too. But it changed at the last moment as it was decided to award a prize to University of Mysore Fine Arts College which had just started.

Recalling the time she married Doraswamy, Vasundhara says, “It was after my graduation, I got married. I was very clear that I would only get married to a person who encouraged me to continue dancing. Though the age gap between us was more I agreed because of his affection towards fine arts and me.” (She smiles)

“Then, it was difficult to find a person who would encourage dance. All of them wanted me to stop dancing after marriage. In fact, Doraswamy had even met my father with a marriage proposal which I was totally unaware,” she says.

Natya Rani Shantala awardee has the credit of blending Bharatanatyam with Yoga. Doraswamy encouraged her to practice yoga. She started to learn Yoga from Pattabhi Jois and mastered Ashtanga Vinyasa Yoga. She was among one of the best disciples of the Yoga Guru. Vasundhara has earned a Ph.D for her research on Yoga and Bharatanatyam.

She is fondly known as ‘Amma’ among her disciples. She teaches yoga along with ‘Natuvangam,’ the art of reciting the syllables and playing cymbals. In fact, yoga is mandatory for her students.

“We have seen many dancers putting on weight after a few years. I always tell my students to maintain good body as it plays an important role. When they start to teach, it is important for them to dance along with students. It is only possible when they maintain their body well. Only beating ‘Tattukolu’ (a wooden instrument used by Bharatanatyam gurus) will not serve any purpose,” she says.

Dr. Vasundhara’s house in Ramakrishnanagar E&F Block is also filled with sports medals and trophies. As a student, she was involved in many sporting activities which included tennikoit, shuttle badminton, throwball, carom and chess. Whenever she gets time, Vasundhara loves playing chess and carom.

She has also mastered the art of ‘Kalaripayattu’ and ‘Tang-ta’ (sword fight). Vasundhara travels to Kerala to practice Kalaripayattu.

Even at 70, Dr. Vasundhara is raring to go with her passion. While most prefer to lead a retired life, she plans to expand student strength and take up further research in Bharatanatyam. “There is no end to knowledge-gaining. I have been successful to compose Bharatanatyam for Yakshagana music and in fact, I was the first to perform Bharatanatyam for Sama Veda as well,” adds Shreshta Kala Pracharak awardee.

Among the top honours received by Dr. Vasundhara is her performance at the ‘World Peace Conference’ organised by United Nations Educational, Scientific and Cultural Organization (UNESCO) where over 2,500 representatives from 137 countries gathered. She was the only Bharatanatyam exponent from India to perform there.

Her dance school has a branch in Melbourne and Vasundhara travels on a regular basis to conduct classes. She has visited countries such as Czech Republic, Poland, Germany, France and USA, where she has a number of students. She is Visiting Guest Professor at the Alabama University in USA. She was conferred with Honorary Citizenship of Louisville, USA and a Lifetime Achievement Award by the Mayor of Louisville.

The four-day event ‘Saptathi’ organised by her students in honour of Dr. Vasundhara is itself an example of her exemplary career and a mother who fostered her students to excel along with teaching Indian fine art form.

She credits industrialist T.R. Harish, Managing Trustee, VPAC and art patron K.V. Murthy, President, VPAC, for their extensive support. She also adds that Sagar Hiresave (H.D. Sruthi Sagar), her son, who now resides in Australia and daughter-in-law Meghala Bhat Hiresave have been helping her to continue with her passion.

Apart from Bharatanatyam, Dr. Vasundhara loves her garden and farmhouse she owns on Suttur Road where she spends quality time growing fruits and vegetables. She also adores dogs and loves cooking. In fact, her students relish the food prepared by their Amma on a regular basis.