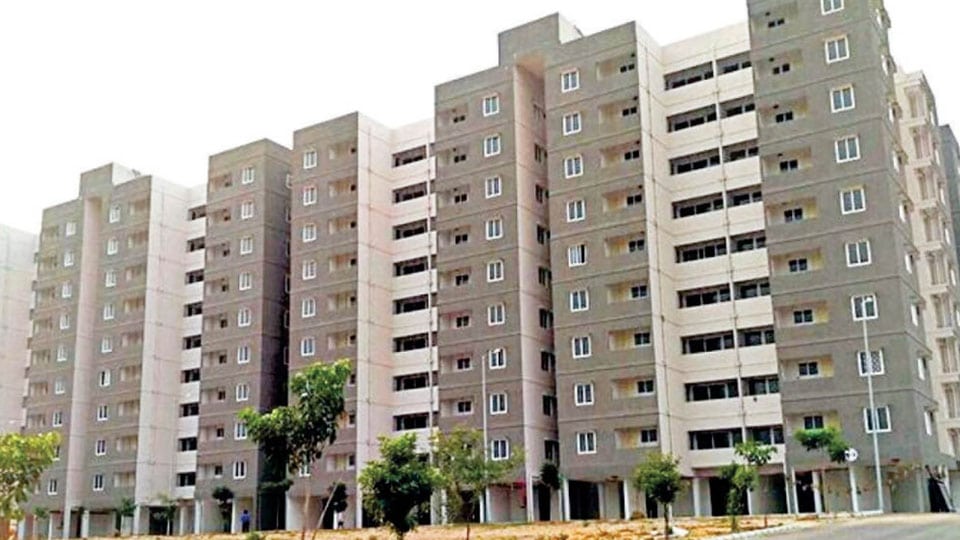 This was decided during the inspection of MUDA Chairman H.V. Rajeev, MUDA Commissioner Dr. D.B. Natesh along with technicians, to ongoing apartment construction sites at Kommaraghatta in Kengeri in Bengaluru this morning.

The inspection team was accompanied by Co-peration Minister S.T. Somashekar, who is also District Minister of Mysuru.

The MUDA delegation interacted with BDA engineers on flat design; space required for two bedroom and three bedrooms flats; technology adopted; where all such flats are built or under construction in and around Bengaluru; people’s response, and plans to build flats at affordable price. Besides, details on lifts, staircases, soak pits, roads, and Under Ground Drainage (UGD) facilities at the apartment complex were collected. The MUDA Chairman also spoke to residents on design, interiors and basic facilities in the complex.

Later, talking to reporters, Rajeev said the MUDA has plans to build apartment complexes at affordable price keeping in mind the common people. In fact, this has been the wish of Minister Somashekar too. The flats would be built to the liking of Mysureans.

“Today, we have studied the BDA model and collected all information. After going back to Mysuru, we will make modification according to Mysuru style and start construction,” MUDA Chairman Rajeev added.

Thanking Minister Somashekar for taking them to various construction sites in Bengaluru, he said plans are afoot to build 6,000 to 8,000 flats on Mysuru city outskirts and Ring Road. Construction in other areas would be taken up after seeing the response of Mysureans. “Further course of action will start under the supervision of the Minister,” he noted.

Meanwhile, Somashekar said he had a detailed discussion with Rajeev on multi-storeyed apartment projects in Mysuru. The MUDA officials have been advised to go for apartment construction projects to woo the common citizens by offering them flats at affordable price. Besides, the flats should be build to suit taste of local people. “We are going for inspection in four other locations in Bengaluru to see what kind of  flats are best suited for Mysuru. Later, the MUDA Chairman and officials will take a final call,” the Minister added.