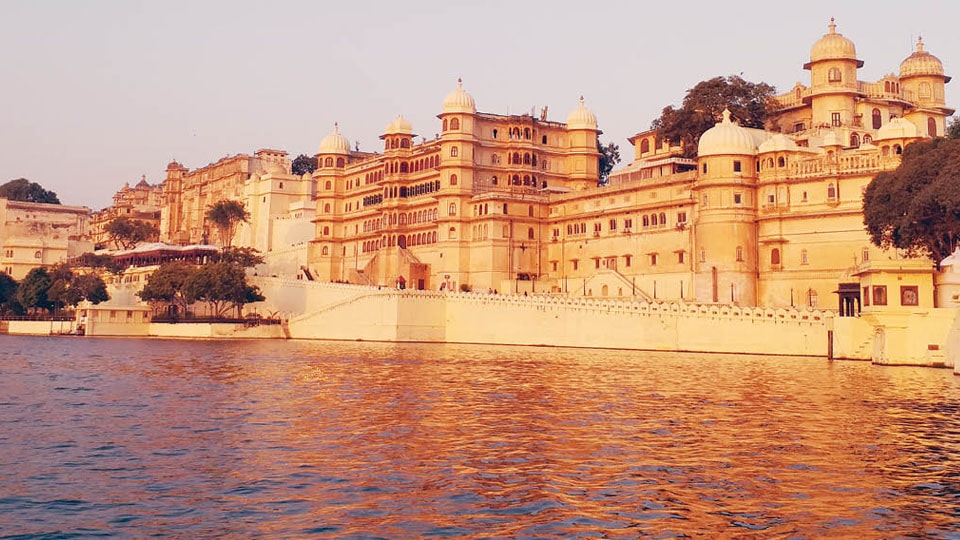 As I said last Friday, our own Mysuru and distant Udaipur, which I visited recently with my family, seem like sister cities to me since they have both been seats of royalty and also because both have many Lakes and Palaces. It is a different matter that while we seem very dissatisfied of late with how we are managing our Lakes while people there seem supremely content with retaining them like how their forefathers had left them…undeveloped and undecorated but tranquil and pristine. And, their Lakes are perhaps destined to remain that way over the years to come as they have a stern legislation in place that proscribes any development around them.

Our Lakes do not seem so lucky as some of us have started feeling that they are not doing enough for us and are therefore thinking of developing them so that they can generate greater income. We seem to be rather dissatisfied with the old world way of thinking that the beauty of our Lakes and water bodies lies in their tranquillity and that they are meant to be appreciated unmodified and unmolested just as nature made them. Except for a very short stretch of the road that skirts the Fathesagar Lake where some food stalls have been established, the rest of the Lake perimeter is completely clear of any kind of business activity meant to attract tourists.

To experience the joy of staying at one of the many quaint home stays around this Lake we had booked a simple, no-frills, boutique home stay ‘The Lake View Villa’ run by a retired engineer, M. P. Singh and his wife Meena who happen to be from the royal lineage of Banswara. It was a very enjoyable and relaxing experience being able to watch the water birds feeding on the Lake edge while having our own breakfast on the lawns overlooking the Lake!

While the birds would peck at their breakfast, pausing to look this way and that way we would peck at ours, pausing to look at them!  A walk along the perimeter of this Lake at dawn or dusk is a magical experience with the tranquil and seemingly endless expanse of water gently disappearing into the mist. Unlike the much smaller Fathesagar, which has many open spaces around it, the Pichola Lake, the largest of the four Lakes within the city limits, is an unimaginably vast water body surrounded by human habitation on almost three sides. The five-storied City Palace complex, built over nearly four hundred years ago by the Maharanas, which is what the Udaipur Maharajas called themselves, overlooks its Eastern banks while its counterpart The Jag Nivas or Lake Palace sits bang in the middle of the Lake. The most striking thing about the huge complex of mazes and terraces that make up the City Palace is that it has on its topmost terrace a huge courtyard with fully grown trees. How the builders of the erstwhile Udaipur Maharajas provided the adequate depth of soil required to grow them there seems like an engineering marvel indeed. I say this because this was a feat accomplished long before the era of reinforced and water-proofed concrete.

At no point in the floor underneath this huge garden could I see the slightest sign of moisture seeping into the masonry walls or ceiling. Incidentally, this Palace has a tiny electric lift that is still in working condition which is very similar to the durbar lift in our Amba Vilas Palace that once used to bring our Maharajas to the Durbar Hall from their private living quarters. This lift was installed by Maharana Bhopal Singh (1884-1955) the last really reigning Maharana of Mewar because he was a invalid. He had been rendered a paraplegic at the very early age of sixteen by tuberculosis of the spine which was not treated scientifically due to the traditional beliefs prevalent during his time.

Interestingly, just next to the entrance to his lift on one of the floors, is a fake door that just opens onto a blank wall and leads to nowhere. It appears it was installed by the Maharana who with his wry sense of humour would take pleasure in ridiculing his guests by inviting them to open it and enter before him! Incidentally, this Palace too like most other Palaces that I have seen across the country did not answer the long-standing question that has been lingering in my mind over many years.

I have always wondered about where members of large royal households and their many attendants went to ease themselves because we hardly see any toilets either for royals or for ordinary mortals in huge royal abodes. The only exceptions were the Palace atop the Amber Fort in Jaipur and the Padmanabapuram Palace near Thiruvananthapuram both of which have just two toilets each!

Ghats around the Pichola Lake that have steps leading to the water’s edge have been left as they were in the days of yore without any attempt to either widen the roads leading to them or allowing any new structures to be built alongside. The result is that no vehicular traffic is allowed or even possible there and they have thus still retained their old world charm that instantly takes you back a couple of centuries the moment you step in there. The many bridges leading to the old areas around the Lake have been left untouched and even to this day they almost remain just walkways. So even the many high end hotels with their enviable locations which abound there, can have their guests arriving and leaving only by humble autorickshaws, leaving their swanky limousines far away where the new city roads end and the old city lanes begin!

The Lake Palace located on an island in the middle of the Lake has now been leased out to the Taj Group which runs the high end Taj Lake Palace Hotel there with access to the place by their own boats operating from their own private jetty close to the City Palace. This water-bound Palace was one of the locations where the then popular James Bond thriller Octopussy was filmed. You can, if you so desire, have your dinner on their lawns by prior appointment…for a princely sum, of course. Understandably, a taste of royalty does not come cheap!