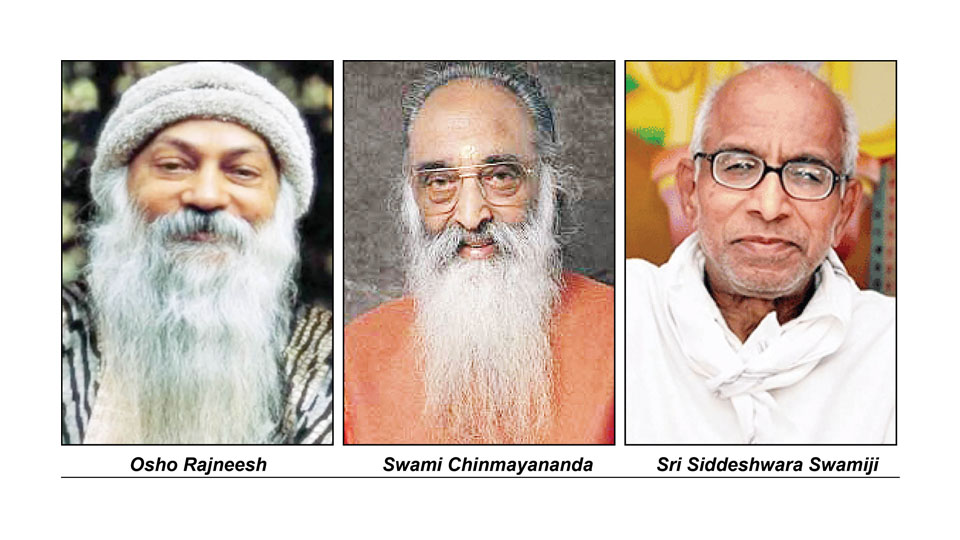 Musings on last days of Spiritual Masters of Sanatana Dharma

The primordial question to mankind is found in the Rigveda (8,000 years old). The question is: Who knows and who can say whence it all came and how creation happened?

This question, intriguingly, is followed not by an answer but by another question: The Gods themselves are later than creation, so who knows truly whence it has arisen?

Here ‘it’ means creation. It is inexorable. This might be the reason why Hindu religion is called Sanatana Dharma (eternal truth) and is different from all other religions in  the world. Its belief, way of worship, idolatry, rituals and theology. If the Gods themselves are later than creation, then the multiple Gods we have must be the creation of man!

It is possible, the French Philosopher, writer Voltaire declared that ‘If there was no God, it would be necessary to invent one’ after realising that God is man’s creation. Bible says “God created man in his own image…” No sir. Going by the Rigveda, it must be the man who created Gods after his (man’s) image or imagination! For whatever reason Voltaire realised the importance of God in human affairs.

Once God is ‘created,’ it is inevitable there must be religions, devotees of Gods and men pursuing the path of God who is considered omnipresent, omnipotent and omniscient.

These men are revered by the laymen variously as Saints, Sanyasis, Rishis, Munis, Monks, Priests and Spiritual Masters. Shepherds of their flock! They serve their followers, as heads of their distinct religion or individually giving public discourses on matters God and religion.

To this category we can include Sri Siddeshwara Swamiji of Jnanayogashram, Vijayapura, who passed away on Jan. 2, 2023, Swami Chinmayananda and Osho Rajneesh who sought not only individual salvation but also salvation for the seekers.

I have seen and heard these three Spiritual Masters and when Sri Siddeshwara Swamiji passed away I began to contemplate on their last days — the way they died, the way their funeral was held, the way their mortal bodies were consigned — to fire or earth — and what remains of them now.

I have found one thing in common among these three — they are real Jnanis, intellectuals with oceanic spiritual knowledge, enlightened, realised persons but each with his own personal way of life.

If Osho Rajneesh is a mystic, appearing like a cult figure with his own brand of followers, mostly westerners, Swami Chinmayananda and Sri Siddeshwara Swamiji are of the  common clay, communicating in a language easily understandable to the congregation.

While Swami Chinmayananda would speak in English and famous for his ‘Gita Jnana Yajna’, Sri Siddeshwara Swamiji would speak on life-lessons with parables and anecdotes drawn from Sharana literature, Saint Basavanna, Vedas and great Hindu epics in the local language Kannada. And he would speak the kind of Kannada that is phonetically different from the Kannada spoken here in South Karnataka. Like Buddha teaching in the local language of Pali.

And when death comes, it comes stealthily or sometimes violently or painfully. Osho Rajneesh, for example, was always keeping a highly sensitive and delicate health. According to reports, the official cause for death was heart failure. He died rather young at the age of 58. According to the Ashram sources, he died because he was living in a ‘body that had become hell’ after he was allegedly poisoned in US jails while he was there.

However, the most unusual and intriguing part of Osho’s death was in cremating his body within an hour of his death for whatever reason. It could be his wish. Characteristically his epitaph reads ‘Never Born, Never Died Only visited this Planet Earth between December 11, 1931 and January 19, 1990.’ Needless to say that the text was written by himself. Wonder without body, how he could visit this planet and can we expect his second visit to this planet. Let it be.

As for Swami Chinmayananda, he lived upto the age of 77 and always had chronic heart problems and he died of the same problem. He died following a bypass surgery in America. A Mahasamadhi Shrine has been built in Himachal Pradesh where he was laid to rest.

However, in the case of Sri Siddeshwara Swamiji who lived a simple spartan life and died at the age of 82, he seemed stoic and a Sthitaprajna (of great mental equanimity) during his illness. He refused medical treatment after few days in hospital and also food. Apparently he decided on Ichcha Marana (self willed death). Like the patriarch Bhishmacharya in Mahabharata epic and many Jain Saints. As a true Yogi, he left the world without much ado but lakhs and lakhs of his devotees came in waves to mourn and pay their last respects. Surely, Sri Siddeshwara Swamiji was a People’s Guru. Mahaguru.

Swami Chinmayananda’s body was laid to rest in accordance with Vedic rituals and that of Osho Rajneesh was cremated hurriedly and  ashes  placed in a newly built bedroom at the Ashram with an epitaph mentioned earlier. However, Sri Siddeshwara Swamiji’s ashes were immersed in river.

A wag asked me while discussing the death of these Saints and Sanyasis, Yogis and Godmen: “Why we don’t hear any of them making the ‘body donation’ to medical  colleges?” Shut up. You stupid, I retorted.

By the way, I consider man as the greatest creator of waste on this planet. The governments and also the social activists are engaged in disposing of the waste so created and working to check creation of domestic and industrial wastes. Fortunately, when a man is dead he becomes a degradable waste and as such there is no problem. However, after cremation, ashes are collected and either preserved or immersed in rivers. When this was discussed, a friend said that he would leave a will wherein he would ask for cremation much against the ritual of his religion and then for his ashes to be used as manure to plants and not immersed in  the rivers, holy or polluted. After all, ashes make good manure.