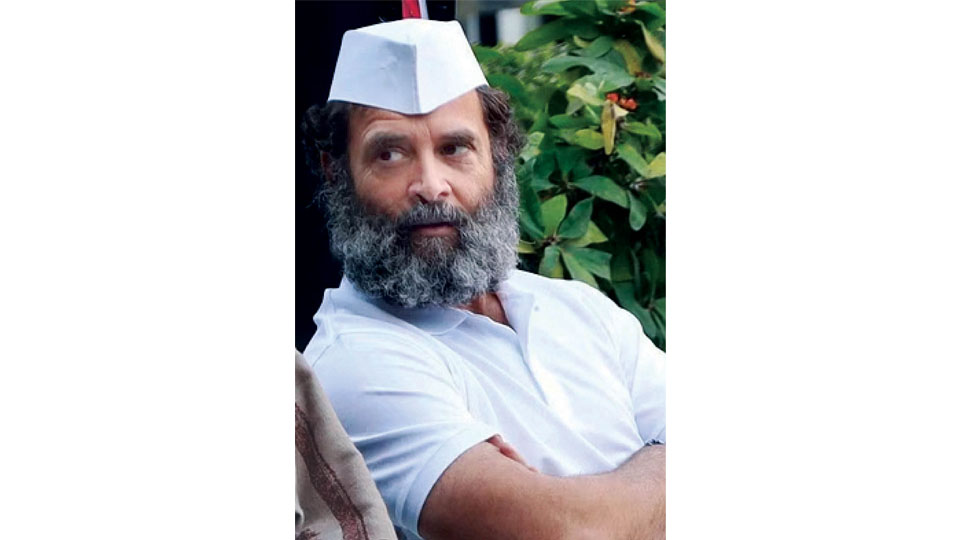 Whether or not Rahul Gandhi’s attempt at political reinvention and rejuvenation via ‘Bharat Jodo Yatra’ will succeed is yet to be seen. But what can be seen right now is his bush. His thick ‘salt-n-pepper’ bushy face has made it to the news.

This week, Union Minister Ramdas Athawale said Rahul Gandhi might have grown his beard, but that won’t help his party grow its numbers in the Lok Sabha.

Congress General Secretary Jairam Ramesh retorted to this beard-talk by saying, “Hum vesh nahi, desh badalne aaye hain.” Good. But Rahul Gandhi is so indecisive about his vesh, it makes one wonder if he is decisive enough to change our desh.

Rahul still needs to figure out what audio-visual image he wants to maintain consistently.

Sometimes he is clean-shaven, dressed in expensive polo shirts and grinning dimple-to-dimple. Next, he is seen sporting light stubble, dressed in a crisp kurta and tearing up his own Government’s ordinance at live press conferences.

Other times he has thick stubble, is dressed in folded-up sleeves and screeching at the microphone. Now, he is sporting a thick beard, walking like a fakir who loves one-and-all while being a politician and trying to be the face of the collective opposition in 2024!

A person who is in the public eye, like Rahul Gandhi, must always maintain a consistent audio-visual appearance. It helps in brand recall. That’s why companies rarely change their logo or jingle. Even if they do, it’s a slight variation of the previous one, which is altered after much deliberation.

Who knows, maybe we are over-analysing Rahul Gandhi’s beard. He may be just following the worldwide trend of growing facial hair.

Now, this new trend has made men as much a target to cosmetic companies as women. These days we see products like ‘Beard Wax’, ‘Beard Shampoo’, ‘Beard Balm’, ‘Beard Scrub’ and ‘Moustache Softener’… There was even a ‘Beard and Moustache comb’!

Now narcissistic men have to keep two combs in their pockets — one for the head and another for their face!

Interestingly, while men are being encouraged to grow their facial hair, they are being told to shave or trim off hair from the rest of their body! There has been a visible increase in advertisements for male body grooming devices.

It is also interesting to know that quite a few modern women find bearded men attractive. There are exclusive websites for women who fancy bearded men, such as Bristlr.com, Beardiful.com and Lumbermatch.com.

But beware, women, all that facial hair could be covering a weak chin, a bad jaw-line or even an embarrassing skin condition.

More importantly, don’t be impressed with bearded men thinking they are wise because, as the saying goes, “If wisdom were to be measured by the length of the beard, then even a goat would be  philosopher-king.”

Carefully cultivated looks are often a strategy of people in public life. Their image helps in subliminal messaging. It is said that Aaditya Thackeray, son of Shiv Sena’s Uddhav Thackeray, used to walk around dressed in a T-shirt, jeans and a clean-shaven face. When the time came for allotting Ministries and positions, there were loud murmurs about how he looked like a college kid. Soon he got a maker over. Aaditya started sporting formal clothes and a beard.

Numerous surveys have reported that people with beards are perceived as more trustworthy and tough. So is Rahul hoping that the beard would evoke trust among the voters?

Is he also trying to show that he is working hard by walking across the nation with his thick-aged beard so it evokes voters’ sympathy? Or is he walking and inviting one and all hoping to be the face of the collective opposition in 2024? Who knows?

He could learn about the power of consistency of visual images from the two influential women of his life. His grandmother Indira Gandhi and his mother, Sonia Gandhi.

Indira Gandhi’s dress, hairstyle and dictation were consistent throughout her political career. The short hair, the tough talk, and the crisp sarees went well with her image as the ‘Iron Lady’ of India. Sonia Gandhi, too, has been consistent in her dignified sartorial choices and style.

Rahul Gandhi’s constantly changing visage reminds one of the movie ‘Forrest Gump’ where the hero grows a long beard on his journey to rediscover himself. Rahul Gandhi’s image inconsistency reminds me of a dialogue from the same movie: “Life is like a box of chocolates. You never know what you’re gonna get.”

Similarly, Rahul Gandhi is like a box of chocolates. You never know what he’s up to next. For all you know, after this yatra, he might get a clean shave and leave for a foreign holiday, leaving behind petrified Congress workers to fend for themselves.

P.S. – If Rahul’s yatra and beard don’t deliver electoral success, he could try a blood transfusion. Remember, a senior Congress leader sometime back pointed out that blood group is connected to being PM in the Gandhi family?! He said that both Indira Gandhi and Rajiv Gandhi were O-ve (O negative), and they became Prime Ministers. But unfortunately, Sonia and Rahul belong to O+ve (O positive) blood group! But guess who O-ve is? Priyanka Gandhi.