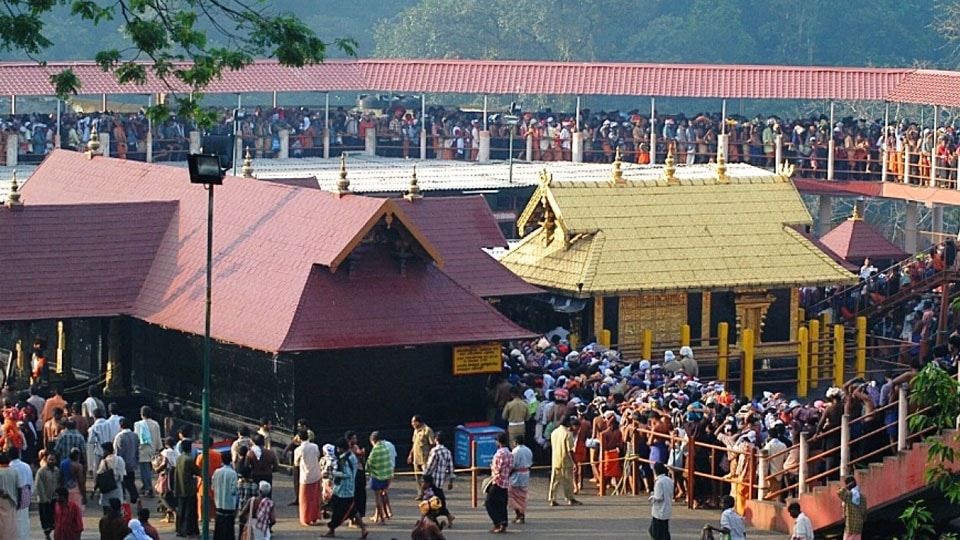 On January 2nd in the dark of the two women dressed in black waited atop a hill to enter a restricted area. They waited for the right time to make a break for it. And just before dawn, they sneaked in with surgical precision and day it was

No, we are not talking about surgical strikes by our Jawans, we are talking about Bindu, 42 and Kanakadurga, 44, the first women to enter the sanctum sanctorum of Ayyappa Swamy temple at Sabarimala after the Supreme Court verdict that the temple be opened for all, including women between the ages of 10 and 50.

Just a few days ago another woman Manju, 36, sneaked into the temple. But Manju, instead of using the dark of the night for cover, used grey of the dye — she dyed her hair grey so people would think she is post-50 years of age.

Now, every time someone between the age of 10-50 enters the temple, the temple is shut for two days for a cleansing ritual. At this rate, Sabarimala will be opened only once a year, rest of the year they will only be purifying it.

While women claim they were not allowed into the temple because menstruating women are considered impure, the devotees say it’s not the case and that it’s about not distracting the Lord based on a story! And this story has a Mysuru connection.

It seems, Ayyappa was born to destroy a female demon and when he did kill the demon, a beautiful woman emerged from the dead demon’s body. This woman had been cursed to live as a demon but Ayyappa had released her.

She was so grateful to Ayyappa that she asked him to marry her. He refused, saying he was a Brahmachari and his mission was to go to Sabarimala to answer the prayers of his devotees. But he assured her that he will marry her when kanni-swamis, or first time devotees, stop coming to Sabarimala.

She said she would wait. And wait she did because the neighbouring shrine to Ayyappa is built for this woman-in-waiting and is worshipped as Mallikapurathamma!

Now the interesting tit-bit for Mysureans. Mallikapurathamma’s original name was Mahishi and she is the sister of Mahishasura, the man our city is named after and whose statue stands atop Chamundi Hill.

So devotees say it is not about menstruating women being impure, but about the philosophy that Ayyappa Swamy is celibate so that he can focus on answering the prayers of his devotees.

By the way, it is interesting to note that while we keep saying “menstruation” is considered impure, there is a festival called Ambubachi Mela, a four-day fair to mark the annual menstruation of Goddess Kamakhya at Kamakhya temple in Guwahati, Assam !

This temple atop Nilachal Hills in Guwahati is shut for four days so the Goddess can go through her “period” in peace. In fact, all temples in that region are closed, and on the fifth day temples are opened and there is celebration ! The temple’s sanctum sanctorum houses the Yoni — vagina — symbolised by a rock sculpture !

Yes, for fanatic Hindus this might come as a surprise. That is why it is important to note that Hinduism is not a book-based religion with a set of rules but a tradition-based one, changing with each region and its people. This is what makes Ayyappa Swamy temple issue not just about equality.

By the way, there are quite a few temples where men are not allowed — three well-known ones being the Attukal Bhagavathy temple, which is called the ‘Sabarimala of women,’ Brahma temple in Pushkar, Rajasthan and the Bhagati Maa temple in Kanyakumari.

READ ALSO  Secularism for Hindus at the mercy of Courts?

While the Sabarimala verdict may be a landmark judgement for women’s equality movement, will BJP use this to push forth another form of equality — One Nation – One Law?

Now that a Hindu religious patriarchal bastion has been breached at a time when a perceived pro-Hindu BJP is in power, may be the government can bring in Uniform Civil Code.

The government will simply say, if Hindus, BJP’s perceived vote-bank, can reluctantly accept change and be progressive so can all other religions — no more conversion and no more talak… talak… talak.

Now, while fighting for entry to a temple, women must choose their battles wisely and take up other defining issues like Uniform Civil Code, Inheritance Laws, Right to Effective Education, Free sanitary pads for underprivileged women and Reservation of seats in the Parliament. These issues will change the attitude of men towards women and empower women. Entry to a temple located deep in a forest does not.

Yes, our Constitution says equality is a fundamental right but we must understand its spirit and its limits.