Home » Columns » Abracadabra By K. B. Ganapathy » Musings on Shashi Tharoor and his ‘Paradoxical Prime Minister’ 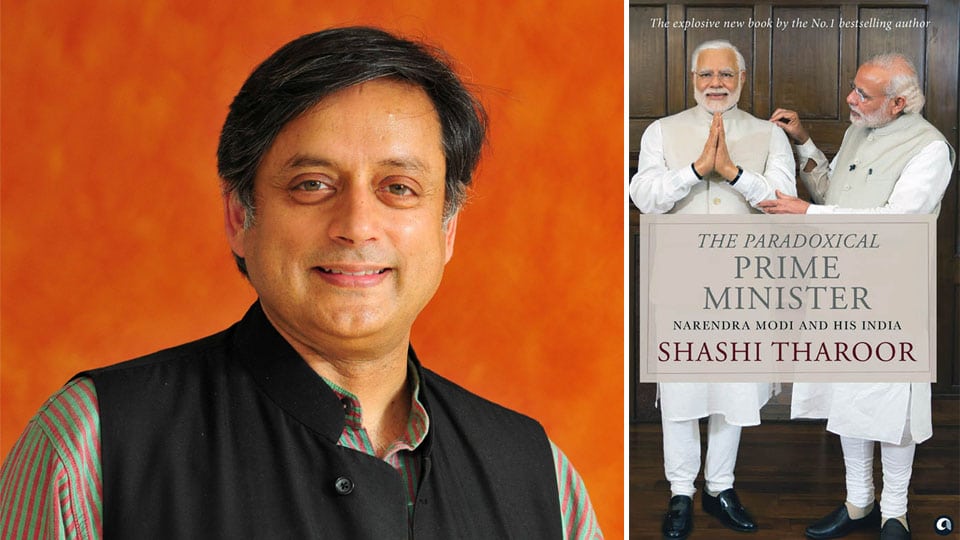 Musings on Shashi Tharoor and his ‘Paradoxical Prime Minister’

Reading books has many advantages to those who have no friends and those who have problem getting sleep. As for me, I have friends and no problem sleeping the moment I hit the sack, exceptions apart. All the same, I continue my old habit of reading books. After all, old habits die hard, it is said. In my early days, novels used to be my preferred reading. But since about 10 years, my interest is in books that are of current affairs, naturally non-fiction. However, when it comes to autobiography, not so much the biography, the book is always suspect, sometimes to the extent the line between fact and fiction are fading. Let it be.

At present, I am reading Congress MP and former Under Secretary-General of the United Nations, who was also the former Minister of State for Human Resource Development (HRD) and Minister of State for External Affairs Shashi Tharoor’s book titled “The Paradoxical Prime Minister — Narendra Modi and His India.” So far I have covered just about 100 pages and found the book interesting.

However, every page has a footnote providing the source of information for what is written in the page above. The problem is about the authenticity of the sources and the difficulty in verifying the facts.

Whatever it may be, Shashi Tharoor should be given credit for writing the book in such a style and language that I would say it is unputdownable. He seems to be the master of current affairs, history and mythology and his ability to relate to the context seems amazing. Indeed, a literary genius, a prolific writer, both of fiction and non-fiction coupled with his ability to speak. No doubt he is a good Parliamentarian too. How I wish the Congress party would choose him as its Prime Ministerial choice should an expediency arise like when Dr. Manmohan Singh and earlier P.V. Narasimha Rao were chosen.

Be that as it may, this is the season of India’s great celebration of democracy — Parliamentary elections. There are two issues that an Indian citizen eligible to cast his vote should consider seriously with regard to the election. 1. He must, as of a religious duty and a social responsibility, exercise his vote no matter how much inconvenience is caused to him. If he fails, he will be responsible for weakening the democracy and thereby he weakens the liberty and freedom of an individual. 2. In a competitive contest to win, who should be the voters’ choice? This becomes a problem these days not because there are too many political parties, but because there are only a very few who deserve to be chosen to represent the people.

This question is haunting every educated and knowledgeable voter, because he is more concerned with the Prime Ministerial candidate and least bothered about other candidates.

This cannot be said about the voters who are focused locally and about their personal equations with the candidate based on caste, creed, religion and sadly even money, selling of vote to the highest bidder. Herein lies the danger of getting a wrong person as the Prime Minister. In our country this has happened many times. No wonder in the 72 years of our independence, we have had 18 Prime Ministers from the stop-gap ones to the adjustable ones throwing to the winds the interest of the country, lack of pride in believing “Country First, India First.” I guess, at least this one nationalistic and patriotic ideal we can learn from Donald Trump, the President of America, who is never tired of proclaiming “America First.”

Here I remember the defining words of George Orwell, author of the book ‘1984’ about people who elect corrupt politicians to public office. To use his exact words, let me quote him:

“A people that elect corrupt politicians, imposters, thieves and traitors are not victims… but accomplices.”

He means to say that these voters are accomplices in the crimes these corrupt politicians commit once they get elected. Therefore, it is important in a national election like the Parliamentary election, whether to bring the proven corrupt politicians or the ones who, following Donald Trump’s example, would say “India First.”

This sentiment should be there for whoever becomes the Prime Minister because that is the only way one can protect the country and its people. Which is the very reason why the Englishman says with his head held high and with no apologies “Right or Wrong, My Country!” He will not compromise the interest of the country either in the interest of Secularism or Socialism like it has been happening in India in the past.

It is in this context, I would like to share just two episodes narrated in the book on Page 20 and 21 relating to Prime Minister Modi. In one episode, Shashi Tharoor thought he could inveigle Modi easily by using his position in the Government as a Minister.

It appears, Shashi Tharoor happened to meet the then Chief Minister of Gujarat Narendra Modi at a function of Pravasi Bharatiya Divas in Chennai in January 2009. Shashi Tharoor,  who was not in politics then, had asked Modi about the 2002 riots and Modi’s role in them. Modi plainly said he did what he could do by calling in the Army when the Police proved inadequate.

Shashi Tharoor then asked how were the Muslims in Gujarat faring. Modi in his own style said that the same question was asked by some very important people from Delhi (assumed to be the Sachar Committee appointed by the UPA Government to report on the conditions of Indian Muslims.)

Now let me come to the second episode. Later in the year, when Shashi Tharoor became the Minister of State for External Affairs, he was in United Arab Emirates (UAE) on an official visit. His task was to urge UAE to invest in India. A UAE company (Dubai Ports World) had acquired the British P&O (Shipping and Ports) and as a result takes over all the P&Os’ existing contracts to manage ports around the world. In India, the UAE company had no problem in converting the existing contracts in three Indian States. But in Gujarat, they got stuck. Therefore, UAE sought Shashi Tharoor’s help.

In great aplomb, Shashi Tharoor telephoned the Chief Minister of Gujarat Narendra Modi and mentioned of the problem. Shashi Tharoor says that Modi’s answer was chillingly blunt. He said, “A company controlled by an Arab country could not run a Gujarati Port.” He told Tharoor in the same breath, “You want these UAE people to invest in India. Tell them to come to Gujarat, I will give them land, 24×7 electricity, good roads, all the co-operation they want. But I won’t let them run the Port in Gujarat.” Modi told Tharoor in a very adamant manner that allowing UAE to maintain the Port would be detrimental to India’s national interest. Unfortunately, the other three Chief Ministers did not think so !

According to Modi, it simply means “India First.” “Right or Wrong, My Country.”

Here I am reminded of the 1962 China War, where India was defeated in a humiliating way. At that time, Nehru was gloating over the Non-Aligned foreign policy. He and his few Communist and Muslim countries had come together with a foreign policy known as Non-Alignment to checkmate the influence of America in the internal affairs of these countries. Nehru was a hero for these Non-Aligned countries. But what did they do to Nehru? In 1962 China War, none of these Non-Aligned countries, including Egypt, came to India’s help. Paradoxically, it was America which came to Nehru’s rescue and saved India.