Home » News » Muslim girl from Mandya meets PM Modi: Thanks him for his help to pursue MBA 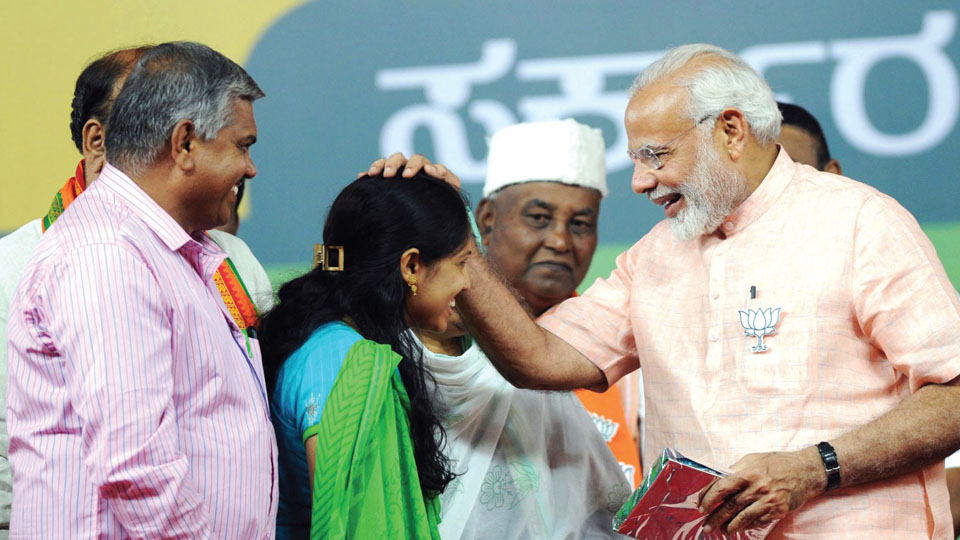 Muslim girl from Mandya meets PM Modi: Thanks him for his help to pursue MBA

Bengaluru: Karnataka Assembly election witnessed a heart-warming incident amid a communally polarised environment. A Muslim girl from Mandya met Prime Minister Narendra Modi to thank him for providing financial assistance to pursue her education. She came all the way from Mandya to say “thank you” to the Prime Minister whose personal intervention enabled her to fulfil her higher education dream.

B.B. Sarah and her family members met Narendra Modi on stage at an election rally in Bengaluru on May 8 and presented him the book, ‘The Buddha and His Dhamma.’ The Prime Minister was humbled by her gesture and turned emotional on stage. He blessed her and wished her good luck for her future.

Sarah had written to the Prime Minister about her poor financial condition and requested him to provide financial assistance to her so that she could pursue MBA. She dreamt to do a masters course after scoring 83% in B.Com.

Her father Abdul Iliyaz, who works in Mysore Sugar Mill, had not received his salary for months, which left Sarah unable to find Rs.1.5 lakh that she needed to pay her tuition fees. She tried applying for loans, but was rejected by several banks as the financial condition of her family was bad.

That is when she wrote to the Prime Minister. To her surprise, the PMO responded to her letter in about 10 days and had asked the then State Chief Secretary Subhash Chandra Khuntia to take necessary steps to help the girl. She was subsequently sanctioned a loan of Rs.1.5 lakh by Vijaya Bank.

Before she wrote to the Prime Minister, the Central Bank of India had turned down her loan application owing to her poor financial background. Even after the communication was received by the Bank, the Central Bank Manager allegedly told her “we have done our duty and you have also done your duty. But it is not possible to sanction the loan.” Later, moved by Sarah’s case, Vijaya Bank sanctioned the loan.

It may be recalled here that Star of Mysore, on Mar.21, 2017, had published Sarah’s story in a report titled “PM Modi opens door for Muslim girl’s education in Mandya; Directs Bank to provide educational loan”

“I would like to personally meet Modi and thank him for helping me with education loan at a time when I was in urgent need. I was watching ‘Beti Bachao, Beti Padhao’ programme on TV and this inspired me to write to the PM. I wish that Modi will bring out a scheme to help talented students like me who want to get involved with higher studies but face financial constraints to do so,” she said.

After meeting the Prime Minister, Sarah said, “Despite being a national leader, he is attached with the population. Whatever schemes he has initiated, he has implemented them. He has not launched them just for name sake purpose,” Sarah said. The girl’s father echoing similar sentiments lauded the Prime Minister for his apt response. “It’s quite unbelievable that out of 125 crore population, he took notice of Sarah’s letter and helped her,” he said.

Sarah has now completed MBA flying colours has now been employed in a multinational company in Bengaluru.

6 COMMENTS ON THIS POST To “Muslim girl from Mandya meets PM Modi: Thanks him for his help to pursue MBA”