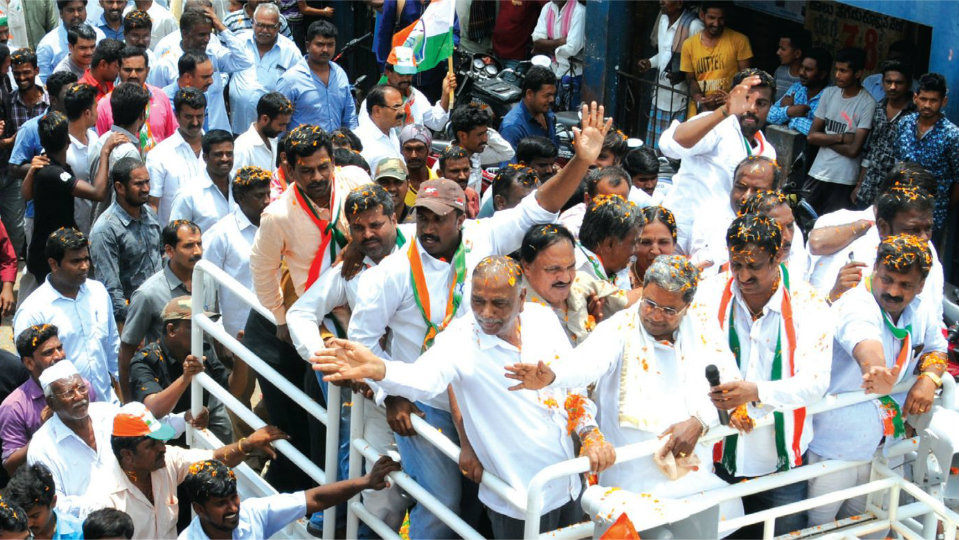 The CM, who began his Road Show from Hosahundi in the taluk coming under Chamundeshwari constituency, also conducted the Road Shows at Gejjagalli, Mandakalli, Kadakola, Byathahalli, Dadadahalli, Sinduvalli, Chikka Kanya and other villages where he sought votes from the villagers.

He questioned the villagers whether the leaders were convincing and bringing back those who had quit the party for petty reasons and sought answers from the villagers.

While canvassing in Mandakalli, CM Siddharamaiah, who identified a person standing near a shop as Ramappa, asked him about the political scenario in the village to which Ramappa replied that the group was divided into two about three days ago but now all of them have returned and added that everyone have taken an unilateral decision.

Meanwhile, Kadakola Nagaraju, who quit JD(S), joined Congress in the presence of the CM during his Road Show in Kadakola.

Speaking on the occasion, CM Siddharamaiah said that whenever he had contested from Chamundeshwari, the people of Mandakalli and Kadakola supported him by giving huge lead and sought the support of the people once again.

Later, he visited Gejjagalli, a dominant Veerashaiva and Lingayat communities village and told them about the works he had undertaken on issues pertaining to Basavanna during his tenure as the CM and explained them about the grants sanctioned to the village. He (CM) urged them to support him and make him the Chief Minister once again.