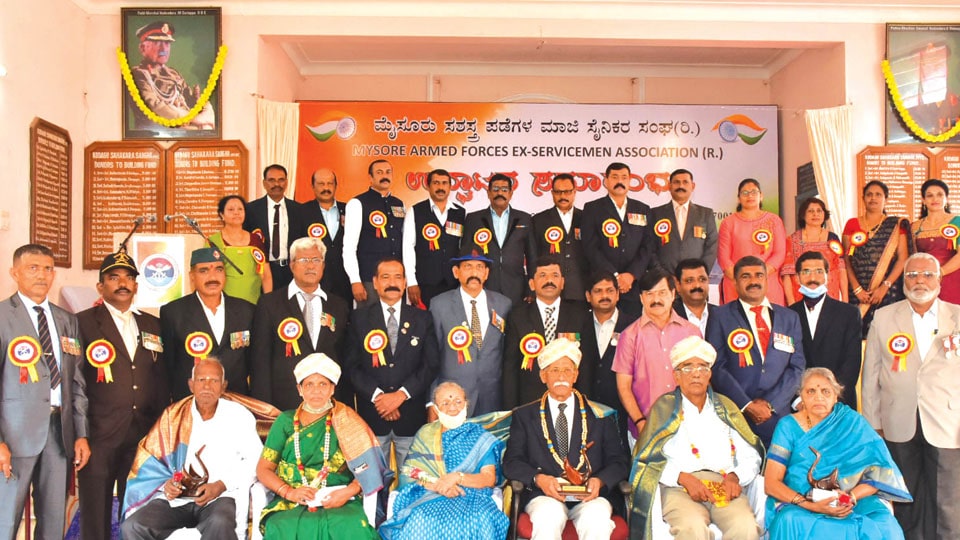 The Association has its Office at No.132/A,10TH Cross,1st Main, near Canara Bank, Belavadi Post, Mysuru.

K.R. MLA S.A. Ramdas in his address, said that he too was the son of an ex-serviceman, who had worked for the Army for 29 years. Maintaining that he too could not make it to the Army due to certain circumstances, he recalled the sacrifices made by the Army for safeguarding the nation’s borders. He assured of letting a building in Srirampura coming under his Constituency for use by the association for its activities. He also asked the association to come up with a list of ex-servicemen residing in his Assembly segment, who do not have own houses, so that he could make efforts to provide them.

Chamaraja MLA L. Nagendra in his address, said that he would give Rs.10 lakh to the association under his MLA fund for the CSD Canteen to have its own building. He further said that ex-servicemen are free to visit his office for airing their grievances.

Maj. Gen (Rtd) K.K. Murthy of Mysuru, who was a guest on the occasion, said that family members of martyred servicemen from Mysuru, Kodagu, Chamarajanagar and Hassan districts should come up with completed details of their martyred kin, so that their names can be incorporated in the plaque to be installed at the War Memorial that is coming up in Mysuru. He also appreciated the efforts of the now transferred  Chamarajanagar Additional DC C.L. Ananda for getting funds sanctioned by the Government for the War Memorial.

Pointing out that ex-servicemen have Half House-tax facility in the State, he called upon the dependents of all ex-servicemen to avail this benefit by submitting the necessary details and supporting documents to the Government.

Lt. Col (Rtd) C.V. Rajendra, ECHS Poly Clinic Officer-in charge, Mysuru, said that the poly clinic is a boon to ex-servicemen and their dependents. Pointing out that the ECHS functioned as an isolation facility during the outbreak of the deadly COVID-19 pandemic, he said that almost all patients admitted in the facility have been completely cured.

Wg. Commander (Rtd) Panduranga said that Group Captain Narayanan who left his house in Chennai on Dec.8 last has not returned since then. Distributing a picture of Narayanan, he appealed the public to provide information if his whereabouts are found .