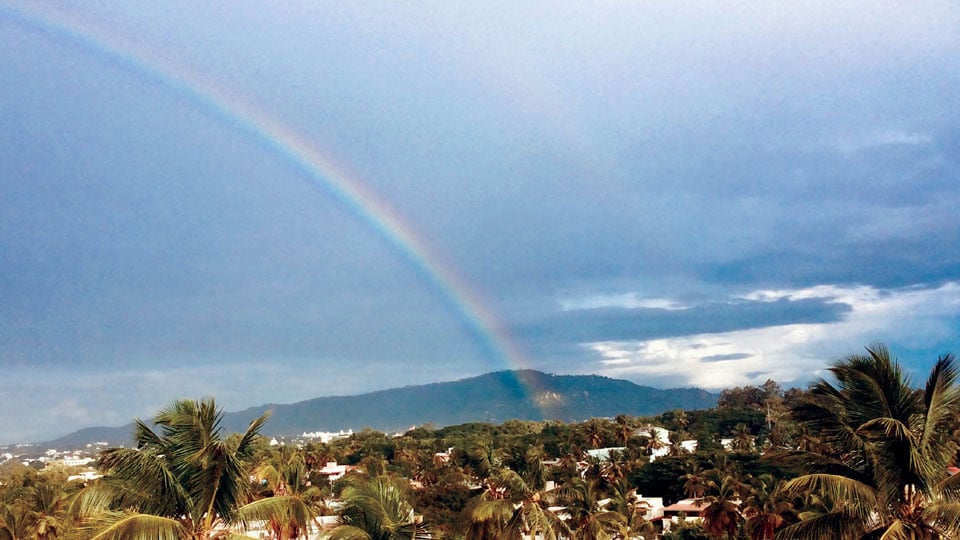 Mysore Memories: The House Next Door

Houses have personalities. Repositories of the memories, life experiences, even dreams of those who lived in them, they acquire an aura of their own. The building next to my family home in Yadavagiri, Mysuru, was one such.

From a wrought iron gate at road level, steep steps led up to a L-shaped verandah, the overhanging roof upheld by red wooden pillars. The vista from there was of Chamundi Hill, opalescent in sunlight and cloud shadow, rising above the greenery and waving coconut  fronds below.

In the late 1940s, film songs  were broadcast from a small tower-like building in Cheluvamba Park. Now mute, it still stands on the central lawn. The early songs of Lata Mangeshkar, “Yaad Rakhna” or “Jiya Bekarar Hai” were eagerly awaited from the loudspeaker atop its roof. Another popular song was “Lara Lappa, Lara Lappa” from the film “Ek Thi Ladki” [1949] starring Meena Shorey.

There were few North Indians in Mysore then, mainly officers at the CFTRI. Then a Punjabi family moved in next door. To curious neighbours, Sukhvinder Kaur, the lady of the house was THE Lara Lappa girl. Young Mysore girls, clad in “langa-davani” [half saree], were intrigued by her billowing Patiala style Salwars, embroidered velvet [makhmal] waistcoats, diaphanous sequinned dupattas and embroidered “juthis” [covered embroidered shoes]. Her dark lipstick defined a cupid’s bow on her upper lip, eyes framed in kajal looked out from under thin, arched eyebrows. Her few Kannada words were heavily accented, to the amusement of local people. Just as the family became one of the community, they relocated to the North taking some glitter and glamour with them.

We had got used to the blank look of the shuttered house when new people moved in, a Frenchman, Christophe, from Pondicherry, his wife Annette and two small sons. He owned a timber business in Kerala. He was a Theosophist  holding weekly meetings in his house. Audiences came out of curiosity at first but continued to attend the discourses as he was a learned speaker. The children came to play in our home. They were there when Ramanujam Iyengar, a friend and Francophile, dropped by.

An imposing figure, he wore a Naamam, lines boldly drawn in white and red, soaring from his aquiline nose to the border of his Mysore Peta. A shirt and a Western style coat completed the upper attire but, instead of trousers, he wore a crisp, red-bordered dhoti in Pancha-kachcham style. Learned in Sanskrit, he had studied French on his own, mastering the grammar, even reading the classics. Longing to try out his linguistic prowess on French people, he was delighted with our visitors.

His accent drew blank stares from the children. Their mother who had only a smattering of English, found his French incomprehensible. While scolding the children that it was “idiotic” to jump off the high balcony wall, she understood that Ramanujam Iyengar was speaking of masculine and feminine spellings of French words. “Oui, Oui” she exclaimed, choosing “idiot” to explain the point, “You are an idiot but I am an idiote.” Sadly, the timber business failed and the family left.

An Anglo-Indian family moved in next. Retired Railway people, Gerald and Amy [names changed] had spent many years of service in North India. Gerald was always dressed in neatly pressed pants and shirts, polished shoes. Amy favoured printed dresses with necklaces of large coloured beads and colourful scarves. She was called “Ginger” at home as her hair had  once  been reddish-gold. Gerald, a romantic at heart, spoke of how he “won her hand” despite opposition from her family. He said proudly “I would not exchange Ginger for the Queen of England!”

The house was transformed by Amy. Cane chairs were placed on the verandah for visitors to have tea, or the favoured ones, a drink. The living room had chintz covered chairs, velvet pleated cushions and ruffled curtains; a cabinet held porcelain figurines, shepherds and shepherdesses, cupids and cute china dogs. A framed cross-stitch embroidery of pink roses hung above it. The room was dominated by a large framed photograph of Her Majesty Queen Elizabeth.

Amy was good at gardening, possessive about her trees; a gulmohar,  jacarandas and a frangipani [plumeria]. A jackfruit tree and an old casuarina shaded the rear of the house. Yadavagiri gardens are bedevilled by red ants [“gejjalu”] that eat away the heftiest bark. The casuarina was in a precarious state but Amy refused to cut it down.

A good cook, Amy produced delectable banana bread and baked goodies in an old fashioned oven and created an outdoor barbeque on a stone bench in the garden to char-grill chicken or fish marinated in aromatic spices. Gerald and she were popular in Mysore society for their hospitality. Their visitors included the elite of Mysore as well as ordinary folk.

Amy innovated “theme” parties in sedate Mysore. An apocryphal story made the rounds in Yadavagiri that on one occasion the theme was “Baby Beano” [the latter word being British slang for “party”].  Moustachioed male guests were said to have  worn bibs and the ladies costumes reminiscent of children’s wear. Whisky-soda served in feeding bottles was the highlight of the beano.

Her friends were shocked when Amy was taken ill, unable to resume her active life. She and Gerald decided to move to a senior citizens’ home in Bangalore. Her belongings, loaded on to a lorry, included a dozen chafing dishes for entertaining that she clung to. She passed away soon after, leaving Gerald shattered. The house stayed empty for years, and was later pulled down. Birds wailed mournfully when Amy’s trees were cut down for the new building, their nests destroyed.