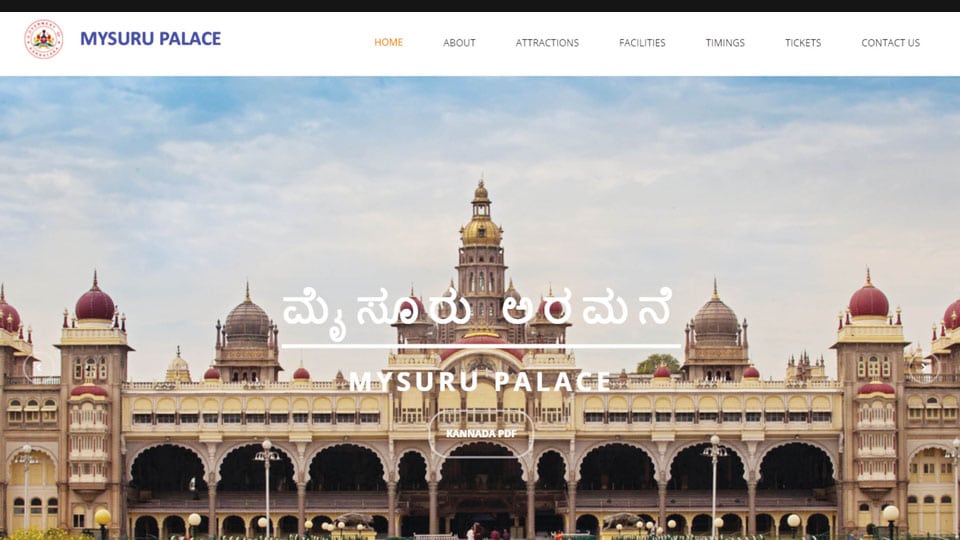 Mysuru:  With just 29 days to go for the world famous Dasara celebrations, the Mysore Palace Board is going hi-tech by introducing online tickets to enter the iconic Mysore Palace without any hassles of standing in long queues to purchase entry tickets.

Earlier, a private entity was in charge of online ticketing and there were several issues regarding renewal and even loss of revenue to the Board. Now, with the e-governance initiative of the State Government, the payment gateway is the State Bank of India and hence the charges that attract while purchasing tickets are very minimum.

Mysore Palace Board Deputy Director T.S. Subramanya speaking to Star of Mysore this morning said that the Board decided to go online as there was a good demand for tickets from different parts of the world and the country and it is now available since the past four to five days. Asked what the advantages were of purchasing online tickets, he said that the visitors and tourists need not  have to stand in long queues and can enter the Palace directly.

6-month validity: The tickets purchased online will have a validity of six months from the date of purchase and any number of tickets can be purchased, said Subramanya.

All one has to do is go to Mysore Palace website www.mysorepalace.gov.in and book tickets in advance. The payment gateway is the State Bank of India which has minimum basic charges as per the RBI (Reserve Bank of India) norms and no additional third party charge will be applied, he said and added that as the Board’s account is with SBI, they get the payment the same day and whatever extra interest is earned thus will go to the kitty of the Board.

Discrimination against foreigners goes: There were lot of complaints from foreigners as they had to pay more than Indians for the entry tickets. However, now this discrimination has been done away with and they will pay the same charge as Indians, said Subramanya.

Entry ticket charges: The entry to the Palace is fixed at Rs.70 per adult and Rs.30 per child. For school and college children who come in groups it is Rs. 10 each.

Meanwhile, tickets will continue to be sold at the Varaha Gate, Amba Vilas Gate and Balarama-Jayarama Gate ticket counters, he said.

Only on Vijaydashami Day, visitors and tourists are not allowed to enter the Palace as it will be closed for Dasara procession which commences from the Mysore Palace, he said.

Savings for the Board: The  Palace Board will save an annual maintenance charge between Rs. 60,000 and Rs.70,000 as the website and the online ticketing system is hosted and maintained by e-governance portal, he said.