Home » News » Huge rush to get relief from debt 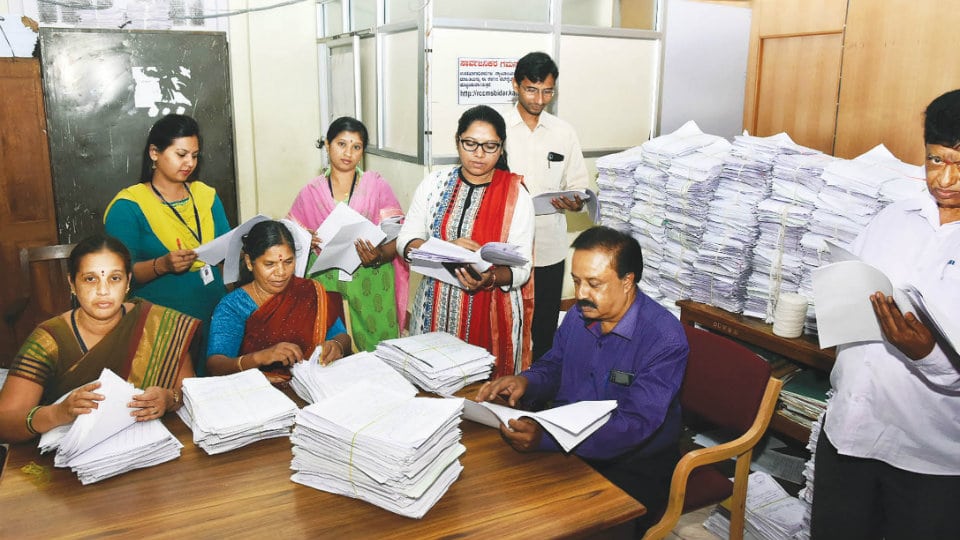 Huge rush to get relief from debt

Mysuru: Hundreds of people are trooping into the Office of the Mysuru Assistant Commissioner (AC) to get relief under the Debt Relief Act that has been passed by the previous Coalition Government headed by H.D. Kumaraswamy and assented by President Ram Nath Kovind.

On an average, every day over 2,000 applications are being submitted at the AC Office located at the premises of Deputy Commissioner’s Office in city. Most of the people who are queuing up at the counters are from the middle and lower middle class families who have pledged their movable and immovable properties with private money-lenders and pawn-brokers. Till yesterday, 11,000 applications have been received.

The State Government, in a recent circular, invited applications from people who are eligible for relief under the Act and has fixed Oct.22 as the last day to submit applications. In a district, AC is the Nodal Officer to receive applications. As such in Mysuru, people from nook and corner of the district are heading to AC Office.

Relief to landless labourers: The Debt Relief Act is aimed at releasing small farmers and agricultural labourers (who earn not more than Rs. 10,000 per month) from clutches of money-lenders and pawn-brokers.

Though the Act dates back to 1976 introduced during the rule of then CM D. Devaraj Urs, it was again passed in the Legislative Assembly this year and the Bill got President’s assent on July 16.

Under the Act, agriculture labourers, landless labourers and small farmers having 2 acres of rain-fed land or less, whose annual income is less than Rs. 1.2 lakh and had taken loan from money-lenders, pawn-brokers or from any other private source, will get relief. It will be only a one-time relief and their loan will be waived off.

Not applicable for future loans: The scheme is applicable to those who have availed such loans on or before July 16 (the day of President’s assent and the subsequent notification on July 23) but it does not apply to future loans. Under the scheme, lenders would not be entitled for any compensation.

Following the Government circular, more than 11,000 applications have been received at the AC Office since the last four to five days. Among the applicants, was Renuka, who had come from Naganahalli. “I have pledged gold with different money-lenders for Rs. 14,000, Rs. 15,000 and Rs. 8,000. I have submitted the application and also given my Aadhaar Card, Voter ID, income certificate and the receipts issued by the pawn-brokers,” she said.

Fifty-six-year-old Nagaraj from Maadahalli near Beerihundi has pledged gold with a pawn-broker and has taken a loan of Rs. 37,000. “I hope that the Government clears the loan. We cannot afford to take back our gold unless there is help from the Government,” he said.

Like Renuka and Nagaraj, there were Asha from T. Narasipur, Shivanna from Devarahalli, Nayaz Sharief from Mysuru and Rhea Banu from Shanthinagar.

Special counters: Mysuru Assistant Commissioner H.N. Shivegowda told Star of Mysore that his office has been receiving applications since last Friday. “We have set up special counters to receive applications and officers have been designated to help the public and answer their questions. All the applications are scrutinised and segregated. There are data entry operators to upload the applications after certifying whether the applicants are eligible for relief under the Act,” he said.

On the possibility of people replacing genuine gold with duplicate ones, the AC said that when the loan money was given to the borrower, the gold would have been checked for genuineness. “Now nobody can claim that duplicate gold was pledged. We will get the ornaments checked by third-party goldsmiths before handing them over to the beneficiaries. There are penal provisions in the Act and they will be used as and when the need arises,” Shivegowda added.