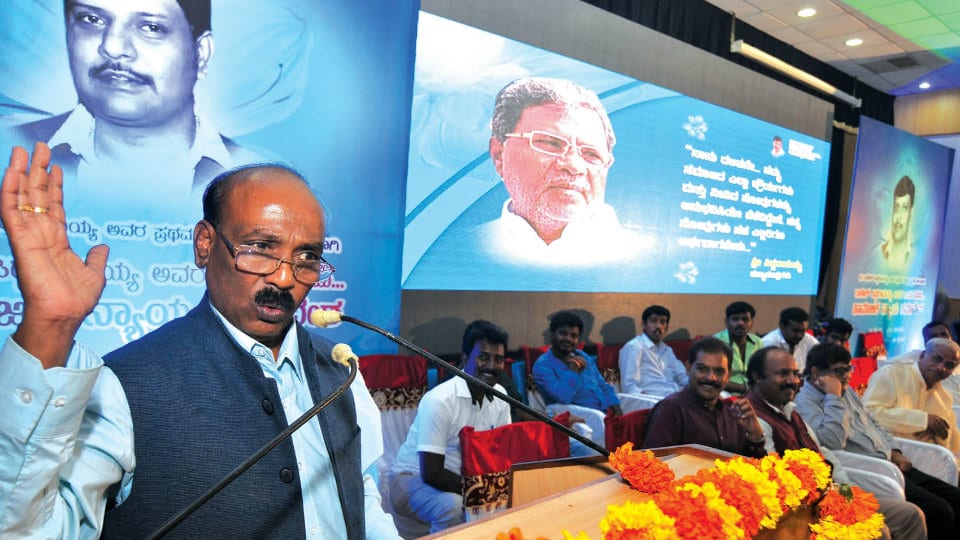 Mysuru: Acting Vice-Chancellor of University of Mysore (UoM) Prof. Dayanand Mane has alleged that he had suspicions that irregularities to the tune of crores of rupees had occurred in the 103rd Indian Science Congress (ISC), organised by the UoM last year (Jan. 3 to 7, 2016).

“More than Rs. 9 crore had been spent on the food arrangements for VIPs at the Indian Science Congress. The money was released in instalments  and spent. The Higher Education Department officials have already asked for an explanation and served a notice. If there is no proper reply, then this will be brought to the attention at the next Syndicate meeting and stringent action will be taken against UoM officials,” he said.

Prof. Mane wondered how after allocating expenses for food and accommodation separately, it could be changed again and more money released. Then referring to Chief Minister Siddharamaiah’s expensive watch, he said that the media had debated about it ad nauseam even at the national level. However, when such a huge irregularity has occurred in UoM, why is the media silent?

Lauding the CM for running the government strictly adhering to the Constitution, in the past four years, he said if we describe the CM as taintless and scam-free politician, it would not be a mistake.

Prof. Muzaffar Azadi of the Political Science Department also spoke at the seminar.

Kannada Sahitya Parishat District President Dr. Y.D. Rajanna said that with the CM introducing pro-poor schemes like Anna Bhagya and Ksheera Bhagya, he was working for the upliftment of the downtrodden and his rule could be compared to former Chief Minister Devaraj Urs who gave a good administration.

Former VC reacts: Former Vice-Chancellor of UoM Prof. K.S. Rangappa (in pic), during whose tenure the 103rd ISC was held last year, reacting to the charges of Acting-VC Prof. Dayanand Mane, told SOM, “I got the Indian Science Congress to Mysuru with a great deal of effort and against heavy odds. It was the highpoint of the year-long centenary celebrations and including Prime Minister Narendra Modi, who inaugurated the Congress on Jan. 3, 2016, ten Nobel Laureates who attended the five-day event, scientists from all over the country and abroad lauded our efforts. It was a feather in the cap of the University and they all had said, it was one of the best Congress  ever held.”

He said that he was open to any enquiry as everything was done according to rules, after calling tenders. Moreover, he said, “I chose two people with absolute integrity and honesty as the Local Secretaries — Prof. N.B. Ramachandra and Prof. D.D. Somashekar. They have toiled day and night to make the Congress a success and they were very vigilant regarding the expenses. With nearly 20,000 scientists from all over the country and abroad and Nobel Laureates attending the conference, there were bound to be expenses for which permissions were taken at every step from bodies of the University and the government. The media did not write anything because they had nothing to write about.”

“Those who are unscientific and unmeritorious could only speak like this. I have been watching the happenings in the UoM since the last seven months and if this continues, the image of the University will be completely tarnished, and then it will become irrepairable. The Acting-VC speaking against the century-old University like this is in very poor taste,” said Prof. Rangappa with a lot of anguish.

Prof. Ramachandra, speaking to SOM said, “Our conscience is clear and we have done our best to make the 103rd ISC one of the best ever. We are prepared for any enquiry.”