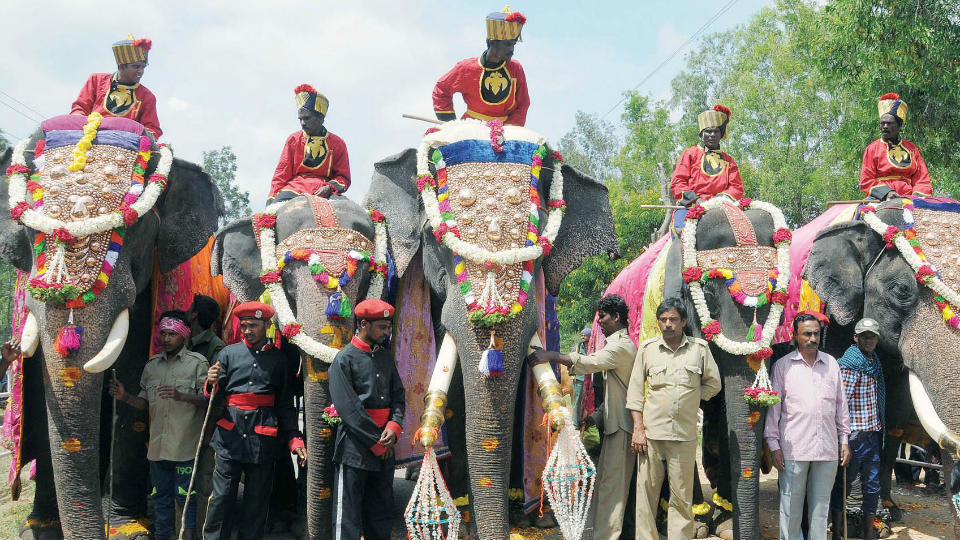 Gajapayana: Caparisoned elephants will march to city on August 10

Mysuru: With less than two months left for this year’s Dasara, the Forest Department is gearing up for Gajapayana, the ceremonial journey of Dasara elephants from the forests to Mysuru. And this time, it will be a grand Gajapayana that will be a  tourist attraction.

The Department has finalised August 10 as the first Gajapayana date and has planned a cultural extravaganza to welcome the elephants and at the same time attract tourists. In the first batch, eight elephants are likely to be brought and the Department is planning to bring two more extra elephants among the 16 elephants that have been selected for this year’s Dasara.

The Gajapayana will begin from Veeranahosahalli forest in Nagarahole National Park, Hunsur taluk. All these years, the Gajapayana was marked by a simple ceremony where Forest Officers would welcome the elephants from the forests as they reach Aloka Palace at Yelwal. From there, they are brought to the Aranya Bhavan (Forest Department Office) at Ashokpuram where they are given a ceremonial welcome and they are later brought to the Mysore Palace without much fanfare.

From the moment the elephants arrived in city till they enter the Mysore Palace, the welcoming ceremony was handled by officers all these years. This year, the Department is targeting a crowd of 5,000 people and an elaborate cultural ceremony is planned.

Speaking to Star of Mysore, Deputy Conservator of Forests (Wildlife), Mysore Circle, V. Yedukondalu said that the age-old tradition of Gajapayana will be a grand affair as it is the first leg of Dasara. “Till now, the Gajapayana was a ceremony that was handled by officials and some elected representatives. This year, we have already written to the Tourism Department, schools and colleges and women’s organisations requesting their participation,” he said. 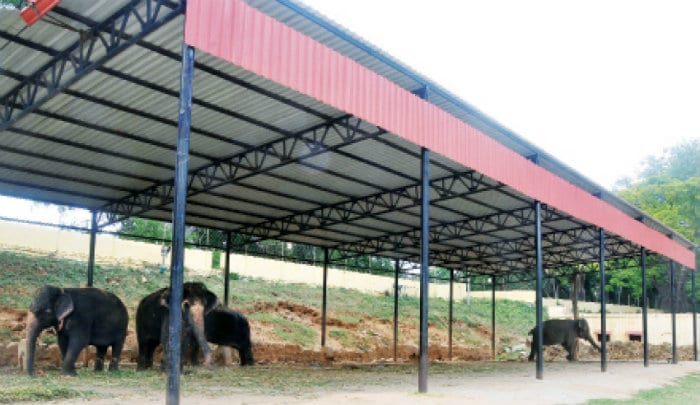 After the elephants arrive at Aloka Palace, they will be stationed there till August 14 before their journey begins to Aranya Bhavan to the Mysore Palace.

Also, there will be performances along the route from Aranya Bhavan to the Mysore Palace, Yedukondalu said. The procession will begin from Aranya Bhavan via Ballal Circle, JLB Road, and Chamaraja Double Road and enter the Palace through the Jayamarthanda Gate.

The Department has plans to publicise Gajapayana and campaigns will start from Aug. 1.

“We are planning a publicity campaign both in print and visual media. In addition, we will install display boards about Gajapayana across the city, Mysuru-Bengaluru Highway and on Hunsur Road to attract and invite people to attend the event,” he said.

The DCF said that they are planning to make a documentary film on Gajapayana to popularise the event. The documentary would be screened at public places. “We have a few video clippings of previous year’s Gajapayana which would be used for the short film,” he said.

The first batch of elephants that will arrive from the forests are Arjuna, Balarama, Abhimanyu, Gajendra, Vijaya and Kaveri. Along with them, there are plans to bring Bheema and Varalakshmi.