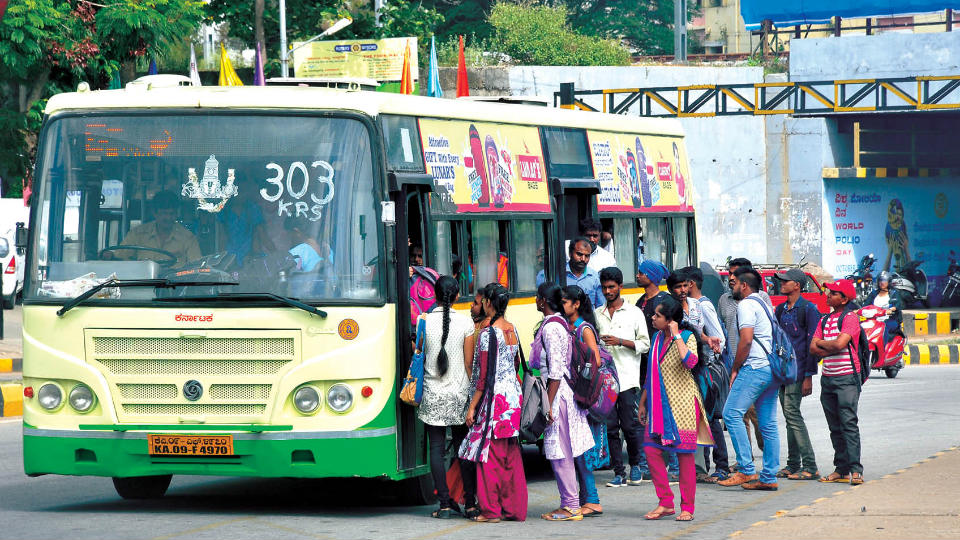 Mysuru: There are many Government welfare schemes, both at the Centre and the State, meant to mitigate the problems of the poor, downtrodden and marginalised sections. No doubt, the schemes are full of good intentions. But, sometimes, the ground reality is different.

Take the concessional bus passes issued to rural students for instance, which is paved with good intentions. Has the real concerns of the students been addressed? Majority of the students, coming from rural areas, are finding it difficult to attend classes on time. It is because of the rules of KSRTC that they have been put to a lot of inconvenience.

The students commuting from rural areas do not have the facility of going to the Central Bus Stand (CBS). If they had an opportunity to travel from the CBS then  their problems could be solved, said a few students.

This problem is being faced specially by students of Kuvempunagar Government First Grade College. They have to catch the buses midway to the college and when the fully-loaded buses reach the bus stops, they do not have even an inch of space to get in. The buses most of the times do not even stop. Hence, a lot of time is wasted.

The rural students going from Hullahalli to Kuvempunagar First Grade College, for instance are facing this problem. When they take a bus from their village, they have to alight at Agrahara Bus Stop and then catch another bus to Kuvempunagar. As already mentioned, most of the times, the buses are packed like sardines and the students cannot get into the bus.

Pratap Kumar, a first B.Com student of the Kuvempunagar First Grade College, speaking to Star of Mysore said, “I come to the college from Hatvalu Village near Hullahalli. My bus pass does not have the facility of me catching the bus from CBS. I have to catch a bus from Hullahalli and get down at Agrahara Circle then I wait for the bus to Kuvempunagar for more than an hour. Most of the time even when the bus comes, the driver does not stop as it is already full. If I had the facility of catching the bus from CBS then I would not face this problem.”

KSRTC fails to respond to appeal

A few of the students of Kuvempunagar First Grade College told Star of Mysore that they had approached the KSRTC with a letter from their Principal to address their problem. But, the officials there flatly refused to listen to our plea stating that there is no provision in the rules of KSRTC to allow them to catch the bus from CBS.

However, it is learnt that a few students from rural areas do travel from CBS to various colleges with the bus passes they possess. “We do have the facility of travelling from CBS apart from the designated bus stops,”    said a few students.

When Star of Mysore spoke to the KSRTC officials, they were categorical in stating that there was no way students could travel from CBS, if it is  not in their way. However, if the route is from the CBS, then they could travel. Instead, if the students are misusing the facility and travelling from CBS, then stringent action will be taken against the officials, if it is brought to their notice, said officer Srinivas.

“According to the rules of KSRTC, the bus passes are issued to the students from the place of residence to the college to the nearest bus stop. For example, if rural students from K.R. Nagar and Hunsur are studying in Kuvempunagar First Grade College, then they need not go to CBS. Hence, they are issued passes to travel from Ramaswamy Circle. On the other hand if students from Malavalli and Bannur have to travel to Kuvempunagar, they are  given passes from CBS.”