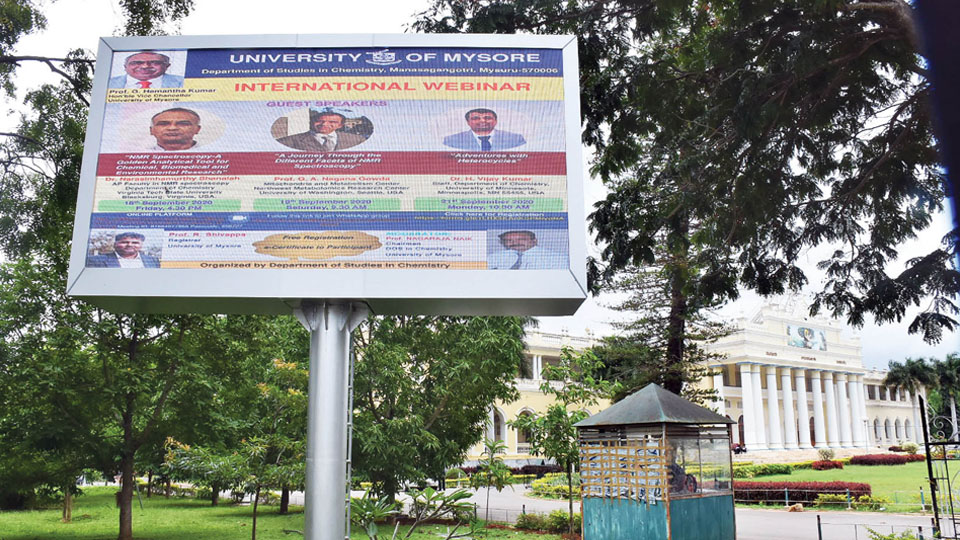 Mysore/Mysuru: Any function in a Department in University of Mysore (UoM)campus or an event in Crawford Hall that you wanted to watch? No problem. Henceforth, you can watch it on the LED Digital Signages at five designated vantage spots, thanks to the novel initiative of UoM.

For the first time in the State, the Varsity has installed five LED screens for the benefit of students, lecturers and citizens. They are at different locations in the sprawling Manasagangothri campus and near Crawford Hall.

While one screen is erected near SJCE, another is near Senate Bhavan, yet another at Gangothri Main Gate near Kuvempu Statue, one more near the Centenary Clock Tower and another in the Crawford Hall.

Speaking to Star of Mysore this morning, Prof. G. Hemantha Kumar, Vice-Chancellor, UoM, said that the  total cost of the project is Rs. 55 lakh and it is installed and maintained by a Bengaluru-based company.

To begin with, a video of the history of Mysore Varsity which has completed 100 years will be shown repeatedly on LED screens. Plans are afoot to have audio too. Henceforth, any function held in any Department in Manasagangothri or at the Crawford Hall will be telecast live and the same could be seen on LED screen. This will enable interested students to watch what is happening in other Departments. New software is being developed for live telecast  of various events including Webinars, he added.

The VC said another utility of this LED screen is to display notification regarding exams and any other notification pertaining to students or lecturers which were hitherto displayed on notice board. This works on WiFi technology.

The proposal to have the LED screen was pending for long and it became a reality now. It will become fully functional by the end of this month. It will be monitored from a Control Room situated at the Department of Studies in Computer Science, said Prof. Hemantha Kumar, who himself is the former Chairman of the Department.

He said that a Committee comprising technical experts and lecturers has been constituted to workout details on the functioning of LED screens and contents. The Panel will decide on content to be streamed for at least two to three hours daily.

It may be mentioned here that 760 Close Circuit TV (CCTV) cameras have been installed on the 200-acre Manasagangothri campus at a cost of Rs. 5 crore to keep a watch on activities inside the campus.