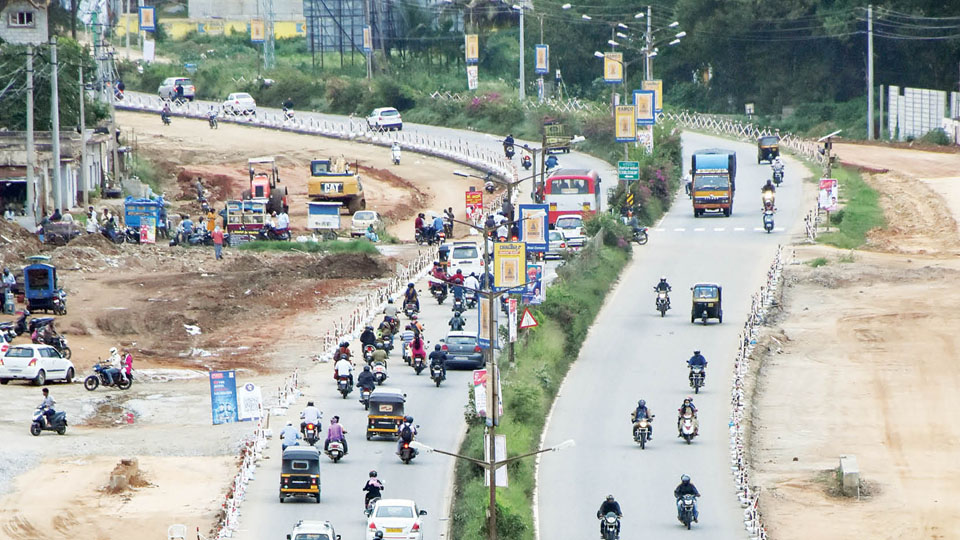 Mysuru-Bengaluru Expressway: No entry for bikes, autos to prevent accidents

Mysore/Mysuru: If you are a two-wheeler rider, then you must know that you cannot enter the Mysuru-Bengaluru Expressway as the National Highways Authority of India (NHAI) has a notified rule that prevents the entry of two-wheeler riders on any Expressway.

Even autos and agricultural vehicles are not allowed on the main carriageway. All such vehicles must take the wide service roads that have been constructed on both sides of the Expressway. This rule will come into force once the Highway construction is completed in 2022. Roads are generally notified as ‘Expressway’ with a permissible speed limit. The priority of the NHAI is to ensure safety, speed and the Expressway has been designed to achieve these objectives.

The Expressway has four service roads on either side (with two lanes each) and the main carriageway is six lanes — three on either side. By banning motorbikes, autos and other slow-moving vehicles, NHAI wants to prevent accidents.

The Expressway passes through many villages, towns and mini cities from Mysuru to Bengaluru and a majority of people depend on two-wheelers, autos and tractors for transport. If they are allowed to criss-cross the Expressway many accidents will occur as there will be a continuous stream of fast-moving vehicles.

These guidelines are not new as they have already been mentioned in the National Highway and Expressway manuals and have been notified and this is the standard that is followed across the world. The same system is in place at Nehru Outer Ring Road in Hyderabad and  the P.V. Narasimha Rao Expressway that connects Mehdipatnam to Rajiv Gandhi International Airport Road in Hyderabad, a senior NHAI official told Star of Mysore.

READ ALSO  Wellesley Bridge under threat of being washed away

These vehicles and motorbikes can take the service road instead of the main carriageway. “If we allow motorbikes and slow-moving vehicles on the Expressway, the very purpose of the 10-lane road is defeated. The Expressway has been planned and designed in such a way to travel between Mysuru and Bengaluru in 90 minutes,” he said.

Elaborate and scientific planning has been made to the service roads too along with many bypasses and flyovers, underpasses for smooth movement of villagers all along the Expressway and that is why the cost has shot up to Rs. 8,000 crores, the Officer added.

Two-wheeler riders form the second most number of fatalities after pedestrians. Following repeated accidents on the Nelamangala Expressway and the Electronics City Elevated Expressway in Bengaluru where many two-wheelers have fallen off the elevated road, there were suggestions in the past to ban two-wheelers on the stretch. The proposal was, however, withdrawn later.

8 COMMENTS ON THIS POST To “Mysuru-Bengaluru Expressway: No entry for bikes, autos to prevent accidents”