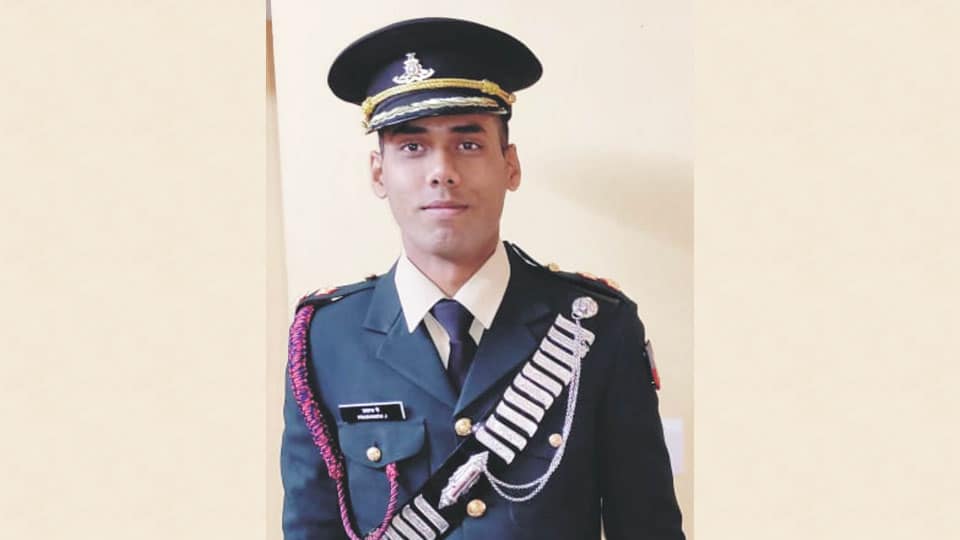 Mysuru boy passes out as Lieutenant in Indian Army

Mysore/Mysuru: Prashanth of Mysuru has passed out as a Lieutenant of the Indian Army, consequent on his successful completion of one year of training at the prestigious Indian Military Academy (IMA), Dehradun.

Earlier, he was in training for three years from 2016-2019 at the National Defence Academy (NDA), Pune, a premier joint training institution for grooming leaders in the Indian Armed Forces. While undergoing training at the NDA, he also completed his graduation, in Computer Science, from the Jawaharlal Nehru University (JNU), New Delhi.

Prashanth had a brilliant academic record right from the beginning, having cracked both JEE Main and Advanced. He secured admission to the National Institute of Technology Karnataka (NITK), Surathkal. While he was in the first semester at NITK, Surathkal, he joined NDA. He had taken UPSC NDA Exam as II PUC student at Sri Chaitanya PU College, Marathahalli, Bengaluru.

He had his initial schooling in Mysuru, having studied at Bharatiya Vidya Bhavan (BVB) and Sadvidya High School.

The 22-year-old is the son of  M. Jagadeesha, a Railway Employee and Rajalakshmi, a homemaker, residents of Hebbal in city.