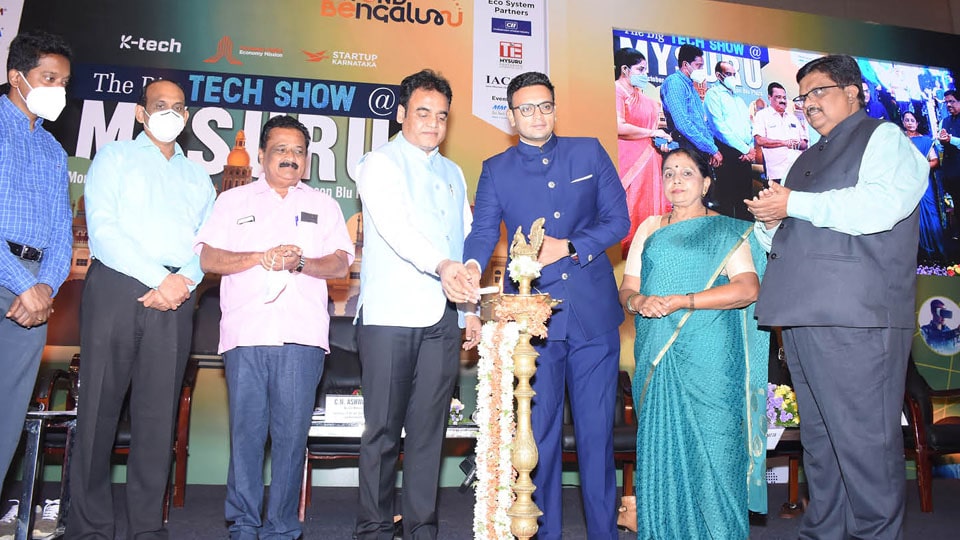 Mysuru has potential to be India’s start-up hub

‘The Big Tech Show’ launched in city; speakers invite MNCs to set up base Beyond Bengaluru

Mysore/Mysuru: With the upcoming Bengaluru Tech Summit 2021, Government of Karnataka and Karnataka Digital Economy Mission under Beyond Bengaluru initiative launched ‘The Big Tech Show’ at Radisson Blu Plaza Hotel in city this morning.

‘Beyond Bengaluru’ is an initiative of KDEM and the Department of Electronics, IT, BT and Science and Technology. Finance Minister Nirmala Sitharaman was scheduled to inaugurate today’s programme and she could not attend the event due to prior engagement.

The Beyond Bengaluru Event was inaugurated by Dr. C. N. Ashwathnarayan, Minister for Electronics, IT, BT, and S&T, and Minister for Higher Education, Skill Development, and scion of erstwhile Mysore royal family Yaduveer Krishnadatta Chamaraja Wadiyar. Rajeev Chandrasekhar, Minister of State for Skill Development and Entrepreneurship and Electronics and Information Technology of India participated virtually.

In his address, Rajeev Chandrasekhar said that the rate of digitisation across the globe is increasing at a fast pace and India alone has around 800 million users connected to the internet. This number is bound to cross the 1 billion mark soon as the Narendra Modi Government aims to achieve universal internet coverage. This shall increase the demand for digital products and services and hence boost the digital economy, he added.

On electronics manufacturing, he mentioned that the Government is working on a policy roadmap to develop the overall semiconductors and electronics system design and manufacturing ecosystem that shall position India as a major player in this sector. “We expect to grow this space through policy action,” he added.

Ever since PM Modi launched Digital India in 2015, India has been moving up the Global Innovation Index and is currently at 46th rank, a 20-point improvement from 66th rank in 2016, he noted.

On the imminent need of skilled persons, he mentioned, “We have a mandate of making India as the skill capital of the world and a new approach towards skilling is being worked out with greater impetus on traditional and heritage skills, tighter industry linkage and employability so that there is a continuous runway of skilling and upskilling,” he said.

In his address, Dr. Ashwathnarayan maintained that the Government wants industry and academia to look beyond Bengaluru for creating maximum impact and cities beyond Bengaluru potential and it is important to effectively leverage the talent and skill across the State.

“Mysuru has the potential to become a premier start-up hub in the country. Additionally, Mysuru is well placed as far as quality and cost of living are concerned and is the next obvious destination after Bengaluru as it provides access to the best academia, infrastructure, connectivity and the expat community,” he noted.

Digital transformation is now happening at an accelerated pace, making initiatives such as ‘Make in India,’ ‘Digital India’ and ‘Start-up India’ more important than ever before. With work from home gaining a lot of significance over the past year, the talent pool that was once concentrated in Bengaluru has expanded and it has enabled industries to find skilled resources in other emerging cities of Karnataka as well. The time is now apt for all the MNCs to expand operations and set up bases in all the emerging and growing cities of Karnataka, he added. Kiran Majumdar Shaw, Executive Chairperson and founder of Biocon Limited and Biocon Biologics Limited, Debjani Ghosh, President NASSCOM, E.V. Ramana Reddy, Additional Chief Secretary – Department of Commerce and Industries and Department of Electronics Information Technology Biotechnology and Science & Technology, Prashanth Prakash, Chairman, Start-up Vision Group, B V Naidu, Chairman KDEM, Sanjeev Gupta, MD and CEO, Lahari, Pavan Ranga, Chairman CII Mysuru & Director N.R. Group, Sandip Patel, Managing Director, IBM India/South Asia, Meena Nagaraj, MD KITS and Director, Department of Electronics, IT, BT and others were present.