Home » News » Children return to schools after over 18 months 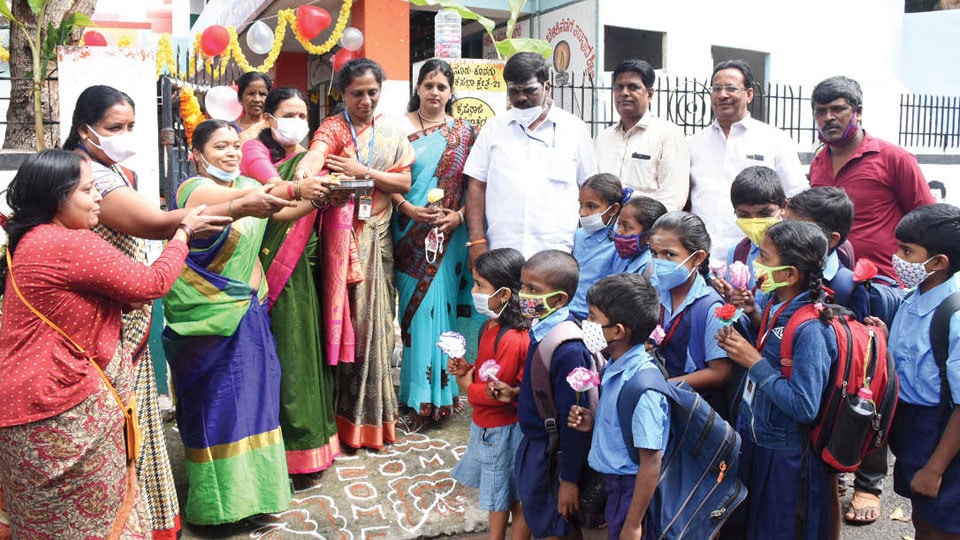 Children return to schools after over 18 months

Mysore/Mysuru: After a gap of over 18 months,  schools for Classes 1-5 opened this morning, much to the relief of children and their anxious parents.

All schools were shut down after the Government declared a nation-wide lockdown following the outbreak of the deadly COVID-19 pandemic in March last year and since then, classes for standards 1-5 were not opened, though all other higher classes opened at different intervals of time this year.

The Government, which last week announced that physical classes for 1-5 standards will open from Oct. 25, had issued a new set of guidelines and school timings schedule for all schools to ensure health, safety and well-being of children in the wake of COVID crisis. It had also said that the Mid-Day Meal scheme for these classes will commence from Nov. 2, when schools start functioning on a full-scale.

As schools reopened, children came to schools, most of them accompanied by their parents, with teachers and other staff waiting to welcome them.

Many schools welcomed back the children with roses, showering of petals, distribution of chocolates, etc. Also, a good number of schools had decorated their entry gates and arches with flowers, banana stems and other decorative articles.

However, the spirit of children was dampened by heavy showers that pounded the entire city throughout last night.

Sources said that a good number of children could not make it to schools today either due to gushing of water to homes or clogged drains or blocked roads, lack of transport and such other reasons. The number of children attending the schools on the first day of opening was not on expected lines and a majority of schools reported an attendance of only about 40 to 50 percent, the sources added.

The Government had asked school managements to strictly comply with COVID-19 appropriate behaviour such as wearing of face mask, maintenance of physical distancing, use of hand sanitizers and frequent washing of hands and accordingly, children arrived at schools wearing face masks. All the children were subjected to thermal screening. The children were also required to bring consent letters of their parents before attending physical classes.

Despite re-opening of schools, the usual buzz that used to be seen during the pre-COVID days could not be seen today, as only a few autos and other public transport vehicles bringing children to schools. However, some elder students were seen coming in bicycles.

As part of preparations for start of classes, the schools had sanitised all their classrooms as a precautionary measure, in keeping with Govt. SOPs.

With classes having started, the BEOs (Block Education Officers) and CRPs (Cluster Resource Persons) visited several schools this morning and carried out an inspection on the arrangements made and compliance of Government guidelines. Mysuru district has 2,036 Primary Schools, including Government, Aided and Unaided, with 1.98 lakh children enrolled in classes from 1-5.