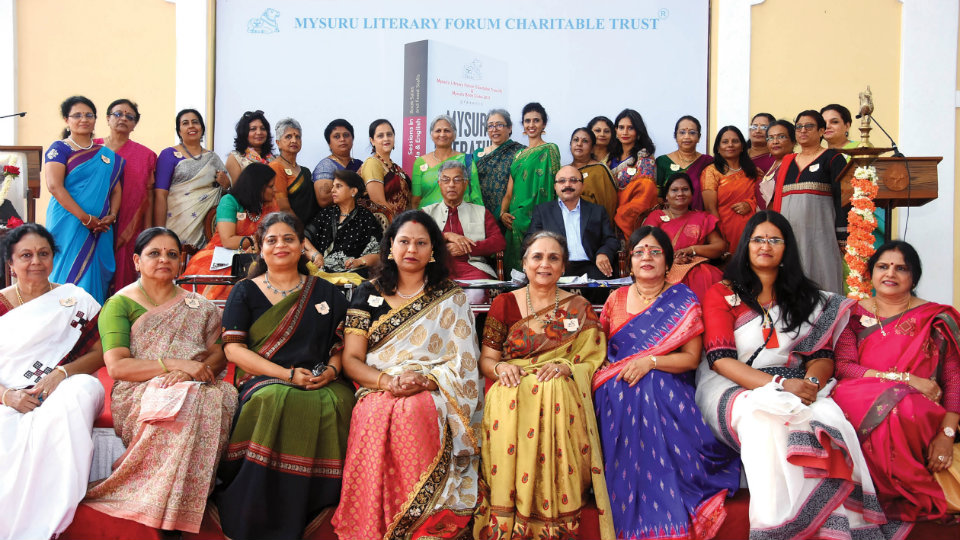 Of late, the Mysuru literary world has undergone a metamorphosis. From being a city that produced memorable writers like Kuvempu and S.L. Bhyrappa, we have now moved into the 21st century, where young vibrant authors like Mahesh Rao, Aroon Raman and Lakshmi Palecanda are publishing everyday with great enthusiasm and zest.

Last year we had an unprecedented two literary festivals in which participated some of the cream of the Indian literary world like Girish Karnad, Ramachandra Guha,  P. Chidambaram etc. It was delightful to hear these veterans hold forth on subjects dear to them.

Mysuru Literary Forum Charitable Trust and Book Clubs 2015, held its Lit Fest at an extremely charming location, Wind Chimes in Nazarbad. The audience sat outside under the shade of a huge Rain tree that provided ambiance with its flowers and leaves. During a whole day of vigorous and lively discussion we enjoyed ourselves thoroughly and learnt so much. One particularly memorable session was with Air Marshal K.C. Cariappa, son of the late Field Marshal K.M. Cariappa. At the age of 80 he held us enthralled with his exploits as an Air Force Officer including his being taken prisoner of war in the 1965 conflict with Pakistan. With other participants like Anjum Hasan, Zac O’Yeah and Vikram Sampath, it was a truly memorable event. It will be wonderful if the Lit Fest becomes an annual event.

The other Lit Fest was held soon after by the Mysore Literary Association, who had invited Shashi Deshpande, Kavery Nambisan and S.L. Bhyrappa to address  the audience. Apart from these veterans, we had Ramachandra Guha who made the audience sit up with his bold and controversial views. This was another memorable event in the current Mysuru social scene.

All in all the month of June 2017 was notable for its literary events. I also want to point out that in the past three years a number of book clubs both in Kannada and English have come to stay in the city. They have made Mysuru a lively forum for discussion and discourse. I am proud to belong to one such book club which holds its meetings once a month on the book of choice. We have moved from Yasmeen Premji’s sensitively written Days of Gold and Sepia to Brigid Keenan’s hilarious Diplomatic Baggage  which describes the perils and pleasures of being the wife of a diplomat who can be posted in Syria one year and Uzbekistan the next. Although you cannot help feeling for her she manages to make it sound merry and interesting.

Another author we read and discussed recently was Stephen Alter, who had been shortlisted for the DSC Prize in Literature. Although he did not win, his book In the Jungles of the Night is a riveting partially fictionalised account of the life of Jim Corbett the legendary hunter.

The reason one enjoys the book club meetings apart from the coffee and cakes, of course, is that it gives the members a sense of bonding. We live with our spouses and children, our cats and dogs, and life is pretty much routine. But attending a book club meeting is like carving out what is called ‘me-time’ for us. In those couple of hours we enjoy the sharing and exchange of views and opinions.

There is another book club I run in our complex which has just about a dozen members. We are friends who meet practically every day living as we do within hailing distance of each other, yet when we don the ‘bookies’ mantle, the issues are thrashed out with no quarter given! The last meeting we had was on feminism in modern literature and the discussion went on for three hours, exhausting, satisfying and energetic.

One of the activities we run is the annual writing contest for the children of our community. The response always delights us and the children come up with amazing flights of imagination. At the same time I have to say that children need to read more and spend less time on computer games and their iPads and TV.

Nowadays book shops have to have a variety of goods attractive to children like water bottles, files, toys and so on. The books are tucked away somewhere on the first floor. Although it seems to be just a smart business gimmick, I long for the old fashioned type of book store that has shelf after shelf of books of a hundred varieties, and nothing but books. I wonder if such a shop will ever come to our Mysuru…

And talking of books, how can I leave you without mentioning one of my favourite libraries — the Nilgiri Library in Ooty. Housed in an imposing building more than a century-and-a-half-old, the interior is a mixture of ancient staircases, polished shelves labelled in metal letters, huge reading rooms with newspapers and magazines and a charming ambiance. Don’t get me started on libraries there is no end to it! Instead next time you visit Ooty, do go to the Nilgiri Library, and then a very old and wonderful Higginbothams bookshop nearby that can lead you into all sorts of fascinating byways of fiction, history, science, children’s literature and so on.

Here’s wishing our glorious city many hours of Happy Reading and a Happy Women’s Day too.