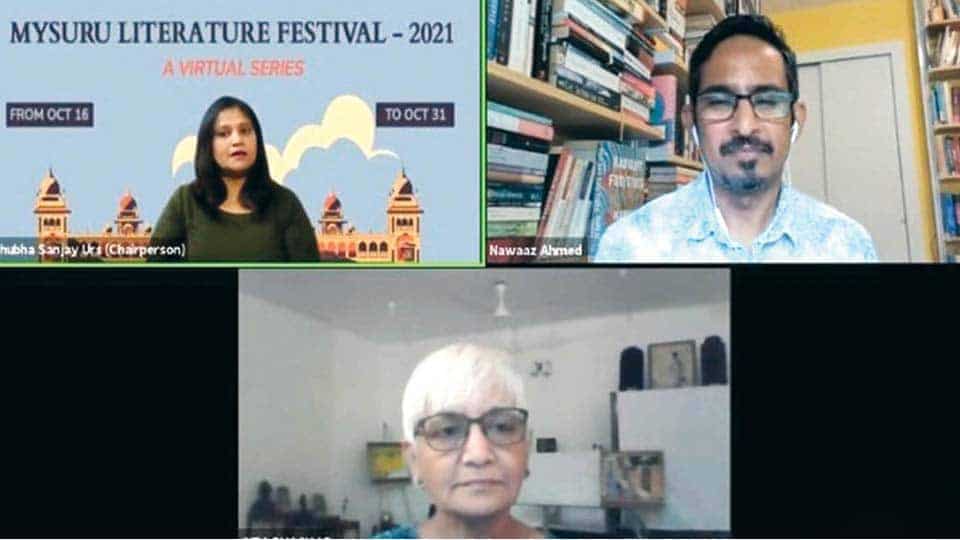 Mysore/Mysuru: The Fifth Edition of Mysuru Literature Festival, 2021 that is being held in virtual and hybrid format began last evening with a conversation between Nawaaz Ahmed, author of ‘Radiant Fugitives’ and Sita Bhaskar, author of ‘Flirting with Trouble and other stories.’

The Mysuru Literature Festival is a flagship literary event on the cultural calendar of Mysuru, from the past five years. Shubha Sanjay Urs, Chairperson of Mysuru Literary Forum and Charitable Trust — the organiser of the Festival — introduced the speakers and welcomed the guests, viewers and the members of the Mysuru Book Clubs.

Nawaaz Ahmed, who worked at Yahoo, took ten years to write his debut book. The story revolves around two Muslim sisters living in the US who are different in their political inclinations and beliefs and their mother who comes to the US to support one of the sisters who is to deliver her child. The narration itself is special because it is told from the perspective of the new-born baby.

Nawaaz began reading out a little heart-wrenching passage from his book which described a new-born baby yet to take its first breath witnessing the death of its mother who had just given birth. The reading gave us a glimpse of the grip that the author has on the language and the flow of emotions touching one’s inner core. He said that he wanted a unique point of view which is minute as well as omniscient — an outsider to the family frictions and hence he chose the story to be rendered through a new-born.

Nawaaz being a queer himself has woven a rich and intriguing story involving multi-ethnic, multilingual and diverse gendered layers of fiction. His protagonist Seema being an activist and a campaigner to US Vice President Kamala Harris brings in a huge political detailing into the book. It was not surprising when Nawaaz informed his readers that his agents had told him to write only about the family and not about politics. But Nawaaz insisted that the time in which his book is set in and the identity of his characters made it imperative that the political undercurrents of the country had to seep into the story itself.

Talking about the queer struggles, the author opined that ‘visibility is possibility’ and that is the only answer to making diverse sexualities acceptable. He has integrated poems by Keats, Wordsworth and the holy Quran in his book to convey and communicate the abstract nature of religion and spirituality.

Sita Bhaskar efficiently and smoothly moderated the conversation to bring out the best aspects of the book and the best strengths of the author. She drew out the author’s opinions out of his book, regarding politics, gender, religion, structure of the book, poetry and cooking.

“To live in America is like living with your in-laws” is a quote from the book which sums up the struggles of the immigrants in integrating into a  different society.

Shabana Azmi is an internationally celebrated film and theatre actress who believes that art should be used as an instrument for social change. She is also highly respected as a social activist and tireless campaigner for the rights of women, slum-dwellers and the underprivileged. She heads the Mijwan Welfare Society, an NGO that works for empowerment of the girl child in rural India.

Shabana Azmi was nominated to the Rajya Sabha in 1997. She is a recipient of the Padma Shree and Padma Bhushan. She was awarded the Gandhi International Peace Prize at the House of Lords in 2006. At the Bicentennial celebrations of International Human Rights in Paris 1989, she was honoured along with Mother Theresa by President Mitterrand of France.

READ ALSO  A Conversation with internationally acclaimed violinist Dr. Mysore Manjunath: 'Music expresses that which cannot be said and on which it is impossible to be silent'

She also won the Crystal Award along with Mohammed Ali and Michael Douglas at the World Economic Forum 2006. She has been conferred five doctorates by renowned universities both national and international. She has received the prestigious Martin Luther King, Rosa Park and Chavez Award and is Visiting Professor of the University of Michigan. A former UN Goodwill Ambassador for Population and Development she continues to work on issues of Public Health. She has recently been nominated as Global Leadership Ambassador for Women in Public Service Project initiated by Hillary Clinton.

Maithili Rao is a freelance film critic and author of ‘SmitaPatil, A Brief Incandescence’ (HarperCollins, now translated into Marathi). Her next book, ‘Millennial Women in Bollywood: A New Brand?’ will be out next year. Due for publication 2022 is an anthology on ‘Motherhood — The Oldest Love Story’ co-edited with Rinki Bhattacharya.

Those interested to take part in the festival may register at: www.mysuruliteraturefestival.com The event will be telecast live on YouTube handle: Mysuru Literature Festival. For details, contact Mobile: 99802-50114.