Star of Mysore (SOM): What were the other things that impressed you at Mysuru Zoo?

Anne Knapp:  Plastic-free zones. No one has taken it as seriously as Mysuru Zoo. When you enter the Zoo they check your bags and if you have plastic bags, they put a barcode on it and collect a nominal sum and in the end they scan it. You can redeem it so that you don’t leave your plastic behind.

They also have a very impressive composting operation where they are taking a lot of dung and leftover eatables. They collect earthworms. We don’t have so much of detailing.

There is lot of direction in water conservation, especially at Karanji Lake. When it rains heavily there is a system where water rinses the moats. This is ingenious. Another thing that is impressive is childcare room set aside for nursing mothers. Moreover, here, the animals themselves look wonderful with great shiny coats and good weight too.

The composting unit at Mysuru Zoo.

SOM: Did you also study about the diet for animals?

In the United States, just like you can buy dog chow for your pet, we can buy bear chow, flamingo chow, tortoise chow; there are all kinds of commercially made chows for specific species because there are so many Zoos in the States and they would buy them for their animals. I am not sure if it is commercially feasible in India.

Here everything is made from scratch and they exactly know what is in it. You know rice flakes, barley every single ingredient including ragi that they get and make it for the animals. That is how the ragi ball discussion started when I saw these beautifully made dish and they would tell me you should eat ragi balls as it is very good for you. They make similar thing for elephants. It is giant sized and they feed them right into the elephant’s mouth.

SOM:  Now that you have been here for two weeks is there a unique experience you had in all these days?

Anne Knapp:  Every day was a unique experience.

Anne Knapp: I had a frustrating day as I was leaving. There was a person asking for money and at the same time there were teenagers asking to take a selfie with them, finding me a novelty. All the buses were pulling off and I was struggling to get on one. It is a part of life though.

SOM: Did they tell you stories about the Zoo?

Anne Knapp: I am disappointed. Had I not postponed my trip, I would have been here when the leopard came to the Zoo from the wild. It is another example what Mysuru Zoo is doing. I asked them about emergency preparedness. Do you have fire drills in schools? They said no they don’t have. It occurred to me if every building is built out of stone it would not burn down so you need not train your children to evacuate. We were trying to think of something equivalent but I saw that as soon as the leopard had come into the Zoo they successfully trapped it.

SOM: After your 14-day stay, how much did you get out of this exchange programme?

Anne Knapp: On the last day I presented to them a couple of ideas at the Zoo where there were some senior staff and some Zoo-keepers. So told them pretty much what I am telling you and talked about some ideas that I had done.

SOM: What kind of training would you offer?

Anne Knapp: One of things we could offer is conditioning of animals. We train the animals with positive reinforcement and participate in their own veterinary care and this is done in protected contact only. The keeper never comes in direct contact with the animal but is always done with a barrier.

SOM: What about tigers and lions? Do you have them?

Anne Knapp: Yes, we do have. We have trained them. They press against the mesh and then they get their shots. It takes a while to train them but it is far safer for keepers and also stress-free.

SOM: Do you mean to say the animals are stressed out here? 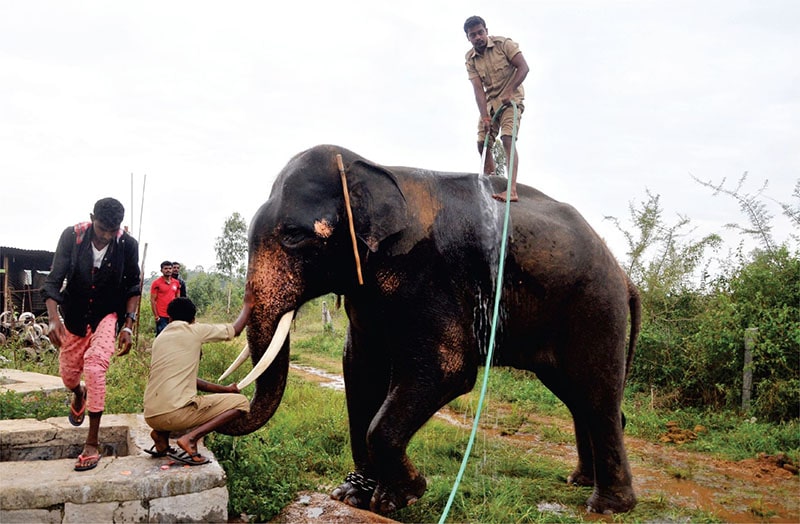 SOM: Have you heard of Mysuru Dasara where there is a direct contact between the elephants and their keepers?

Anne Knapp: This relationship is very different. The mahouts and kavadis live, eat, sleep and travel with the elephants and that is much safer. Whereas the Zoo-keeper coming and going five or six days of a week, it is not the same relationship. I have greatest respect for them and their lives are amazing.