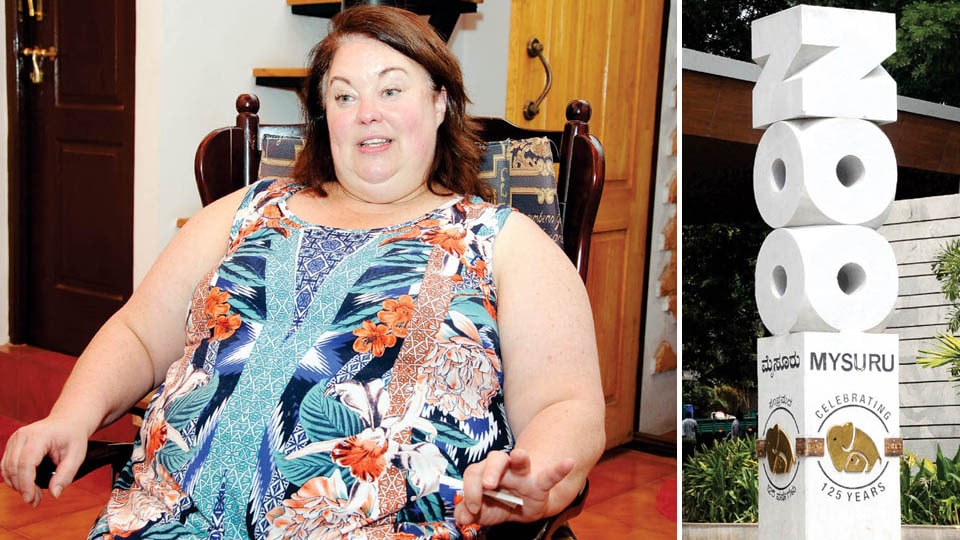 Indians rarely appreciate the achievements of others. It is only when the Western world sings praises, we wake up. This is exactly what happened when a Zookeeper from the United States of America visited Mysuru. Anne Knapp, Director of Animal Resources at Zoo England, was on a Rotary exchange programme visiting the Sri Chamarajendra Zoological Gardens, popular as Mysuru Zoo. She stayed here for two weeks and learnt many things about the 125-year old Zoo.  Star of Mysore caught up with Anne Knapp on the concluding day of her visit at the residence of one of the hosts of Rotary of Club of Mysore West.

She is impressed by the way Mysuru Zoo is maintained. We publish this three-part interview in the light of Mysuru playing host to a four-day Annual Conference of Indian Zoo that began today (Dec. 18). Heads of Zoological Gardens from 28 States are participating in the Conference with the theme  ‘Vision 2030 of the Zoos in India’. — Ed

SOM: How did it all begin before you came to Mysuru? What is your position in the Zoo New England?

Anne Knapp:  I am the Director of Animal Resources at Zoo England which manages the Franklin Park Zoo in Boston and Stone Zoo, in Stoneham.

It began quite some time back. We had a zookeeper named Jonathan Gilmour who was pursuing his master’s degree in Scotland. He passed away there and his parents David and Margaret, (Carson) Gilmour developed a fund in his memory – Gilmour Fund – to help zookeepers to attend conferences or conduct research.

I had hired Jonathan as the zookeeper and he was efficient, handsome and popular. In fact, he won the title ‘Ultimate Zoo Keeper’ title. One of the ways his parents fortified the fund was through an annual bike ride organised by Hollis-Brookline Rotary Club, Nashua. That was how Rotarian Krishna Mangipudi (who was the president of the club) got involved.  The fund-raiser event raised money for the Gilmour Fund and it became a popular event every May.

Krishna Mangipudi started working closely with John Linehan, President and CEO of Franklin Zoo and Mysuru Zoo had a profound effect on him. He thought it would be a great idea if Boston Zoo formed a ‘sister zoo’ relationship with the Mysuru Zoo like the Boston-Mysuru ‘sister city’ concept.

SOM: Is it a private zoo?

Anne Knapp:  It is a non-profit organisation and receives funds from Massachusetts government as the property is located in that State. The Zoo has to raise money on its own from gate collection.

SOM: How were you chosen for this exchange programme?

Anne Knapp:  John Linehan recommended me for my broad background.  I have experience in animal husbandry and I run the internship programme for animal pair department and I am on the National Zoo Safety Committee.

So he thought I would be able to cover many departments and have broad range to help them with. What he did not know was that I had a Bollywood addiction before this. When John approached me, I thought it was a joke and he was teasing me while he was asking me if I was interested in going to India – something that I thought I would never be able to do. 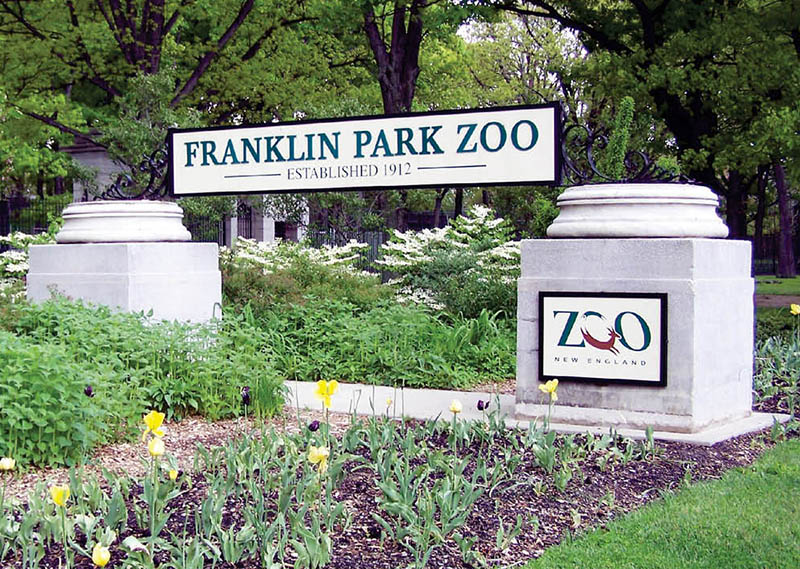 SOM: What is this Bollywood addiction about?

Anne Knapp:  I had watched about 100 Bollywood movies and I really got interested in India. I have always liked Indian food – colours, taste and texture – and I also watched a lot of documentaries. So when I agreed to come I had the two extremes of India in my mind one that is outrageously optimistic and the other sort of seriously gritty.

SOM: Before you embarked on the journey to India, were you fully prepared?

Anne Knapp: We planned for a long time and made sure we were in contact with Mysuru Zoo. I was nervous initially but I had the most wonderful experience.

I came to Bengaluru on Nov. 1 and the city was beautifully decorated as it was Rajyotsava Day. It was such a perfect arrival. I took the KSRTC Flybus to Mysuru, which was extremely comfortable. That was my first experience with Indian traffic. India visit gave a depth and deepened my understanding of such an amazing place.

SOM: After you arrived in India what was the welcome like in Mysuru?

Anne Knapp: I was received by a few members of the Rotary Club of West and Rotarians are the best people you can meet. I felt like they are family to me. I started my stay with Rotary Mysore West Hon. Secretary Rtn. J.P. Aiyanna’s family and learnt all about Coorg, Kodava cuisine, their history and that was a wonderful experience. The other three hosts I stayed were Rtn. PDG H.S. Shivanna, Rtn. C.R. Hanumanth and Rtn. Suryanarayan. I have got a wealth of information and the hosts have taken such good care of me.

SOM: Can you share the experience of visiting the Mysore Zoo?

Anne Knapp:  Rtn. Reginald Wesley accompanied me and we met the Zoo Executive Director C. Ravishankar and had great introductory conversation about how we wanted to form a relationship. I wanted to learn about their Zoo and start a collaboration of sharing ideas. He generously set up a schedule for me and assigned Education Officer Shanthala who took me around the Zoo.

Ravishankar had organised lunch for me in the canteen every day which was another cultural experience. I started eating with my fingers and I tried everything. The only thing that I could not get to eat was ragii balls. One of the hosts made ragi rotti and that was the closest I could get.

SOM: What is the difference between your Zoo and the Zoo here?

Anne Knapp:  Franklin Park Zoo and Mysuru Zoo are similar in size. The acreage they give for Mysuru Zoo includes Karanji Lake and the size is the same of Franklin Zoo. Mysuru Zoo will complete 125 years and we celebrated our centenary four years ago.

We have about 183 employees whereas here they have about 300 employees and that is interesting and it speaks. The zoo here is just spotless. The keepers are all round and you can see them in their uniforms. Our Zoo gets 6 lakh visitors annually where as Mysuru Zoo gets 300 million visitors and that is a huge number.

SOM: What about the number of animals in your Zoo and the Mysuru Zoo?

Anne Knapp:  Franklin Park has a little more of  small species, may be a 100 Seba’s bats  but having about 30 Indian bison are not the same as they are huge and take  up a lot of space. Counting numbers is not the best way to compare the collection.

My feeling is that Mysuru Zoo has much more larger animals.. There is a dramatic collection of Indian gaur, Neelgai and elephants. We don’t have elephants but we have gorillas and you don’t have them. You have rhinos and we don’t have them. We have pygmy hippos.

Mysuru Zoo is beautiful and well-landscaped. Tropical plants are beautiful  and you can see plants are a priority here. Many of the plants are labelled, especially if they have medicinal values.