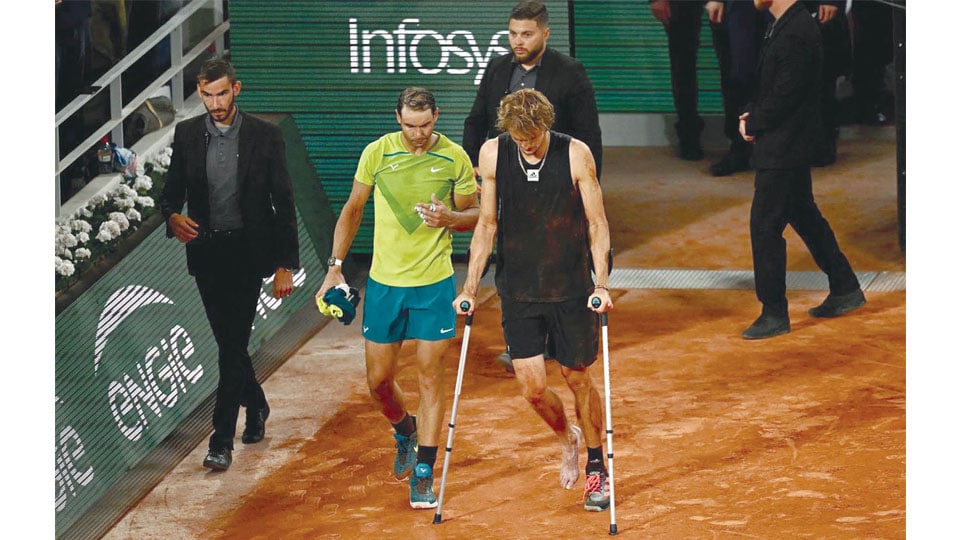 Rafael Nadal reached his 14th French Open final on Friday when Alexander Zverev was forced to quit their last-four clash after suffering a sickening right ankle injury on a day of drama at Roland Garros.

On Sunday, Nadal will play in his 30th Grand Slam final when he tackles Casper Ruud, the first Norwegian man to make a championship match at the majors.

Zverev turned his ankle as he chased down the ball in front of the players’ boxes on Court Philippe Chatrier where his shocked team and family were sitting. As his piercing screams of pain echoed around the 15,000-seater court, a tearful Zverev was taken off the court in a wheelchair as a concerned Nadal looked on.

Casper Ruud to take on Nadal

Casper Ruud became the first Norwegian man to reach a Grand Slam final on Friday when he set-up a French Open title clash with 13-time champion Rafael Nadal, the man he described as his “idol”.

World number eight Ruud defeated Croatia’s Marin Cilic 3-6, 6-4, 6-2, 6-2 in a semi-final which was held up when a protester ran onto the court and tied herself by the neck to the net.

She wore a shirt which bore the slogan: “We have 1028 days left” before being eventually cut free by security staff.

The match resumed after a 15-minute delay. Ruud fired 16 aces and 41 winners past 2014 US Open champion Cilic.