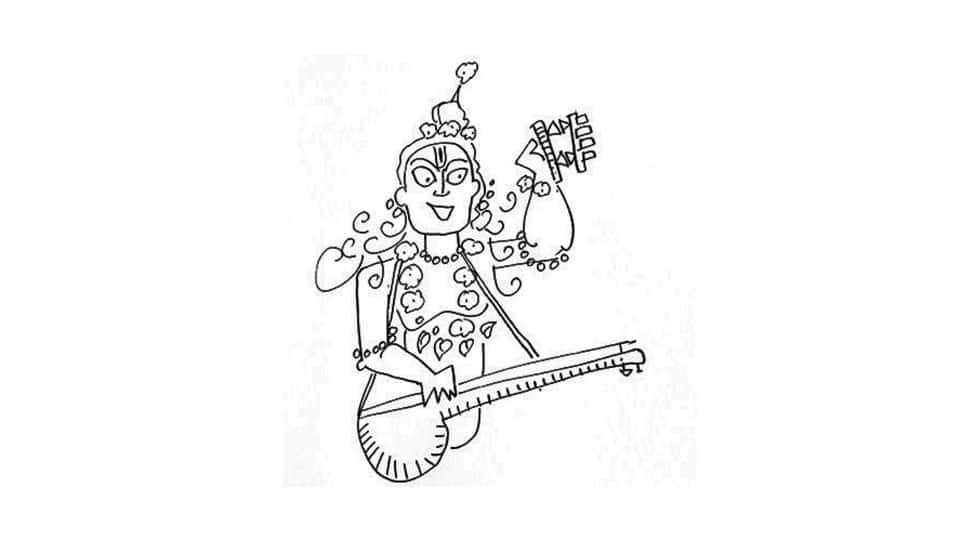 In the Puranas, we are told that Narada, the mind, was born from the thoughts of Brahma, and like all sages had the knowledge of Brahma Vidya, or the ultimate truth of the world. He would go around the world sharing this knowledge and enabling people to break the cycle of birth and death. The problem was he went around divulging this knowledge to every son born of Daksha Prajapati. These sons, therefore, refused to marry, produce children, become householders and practise their vocation. Instead, they chose the path of renunciation, becoming hermits and ascetics. They began working towards moksha, because that is what the ultimate role of life was. Or at least, that is what they believed.

This made Daksha Prajapati very angry. He cursed Narada in his anger. Since Narada was the one who was telling everyone how to achieve moksha, Narada would not achieve moksha himself. Instead, he would forever wander between the realms: the celestial, the earthly and the subterranean realms, until the end of time.

We are told Narada remains travelling around the world to make people realise the limitations of worldly life, so that, eventually, they discover the path to God. And so, Narada is associated with creating quarrels. He goes around the world making mischief. He seems to be involved in spreading information, like a newspaper journalist; but he, continuously, compares and contrasts people. In doing so, he creates jealousy, anger and rage, all the things that indulge the ego. He, thus, plays an important role in story-telling. He becomes the catalyst of the plot. It is because of him things happen. He goes and goads Kansa to kill Devaki’s children. He goes to Ravana and extols to the demon-king the beauty of Sita.

But he is also associated with bhakti. He goes around singing songs of Vishnu. He propagates and tells people about the glory of Vishnu. For many people, Narada is a musician, and is, therefore, associated with the tambura. He is the original founder of kirtans and bhajans and plays a key role in Bhakti Yog.

So, this dual character, at one level, creates quarrels, which entrap us in the worldly life and in the material world; and, at another, manifests the spreading of the song and music of the Lord, which helps us break from the material world. He does both these things, as he wanders between the three realms, instigating battles, disagreements and discord.

He often encounters Krishna in Dwarka, and the two are part of many adventures. In their adventures, humans discover the importance of bhakti and how bhakti enables a householder to live like a hermit and, eventually, attain Brahma Vidya and break free from the cycle of life and death, without abandoning worldly duties.