Home » Columns » Abracadabra By K. B. Ganapathy » Nationalists Vs Liberals – War of words on social media 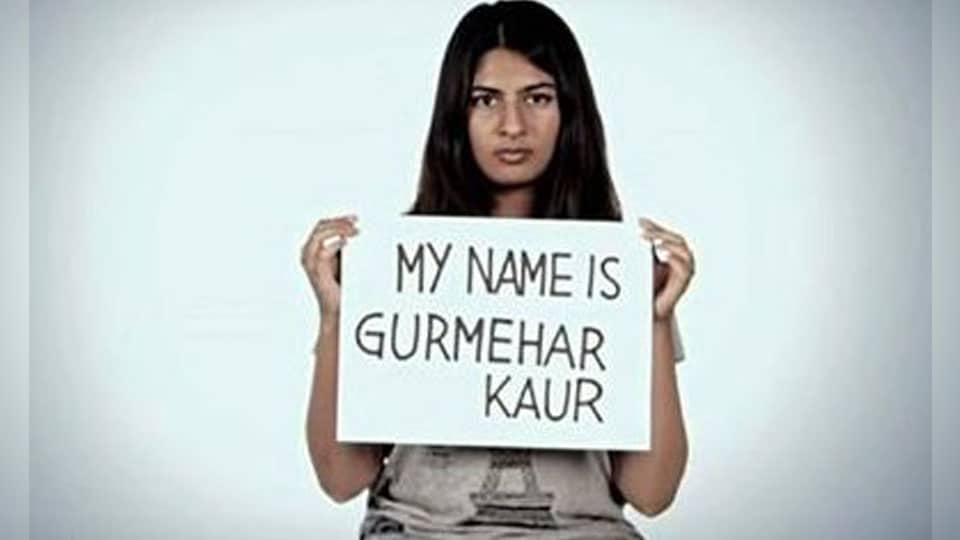 Nationalists Vs Liberals – War of words on social media

I am sick of reading the ongoing war of words on our social media triggered by a media post from a 20-year-old Delhi University student, daughter of Capt. Mandeep Singh, a Kargil war martyr, nay one killed in that war, Gurumehar Kaur. She says, that “Pakistan did not kill my Dad. War killed him.” According to her, it was war, not Pakistan that had killed her father. The moot question is similar to the one we read in our nursery book — Who killed cock Robin?

All the birds of the air fell a-sighing and a-sobbing,

When they heard the bell toll for poor Cock Robin.

Kaur had also posted a video about speaking her mind using placards directed at ABVP. One of the placards read, “Pakistan did not kill my dad. War killed him.” She was just two or three year-old when her father was killed and suddenly she realises it was not Pakistan that killed her father. So the question arises: Whose bomb or bullet killed her father who was fighting on India’s side?  Naturally, Pakistan’s. Which is why her father was considered a martyr. In India we don’t call a Pakistani killed in war with India a martyr.

She may have all the reasons in the world to condemn ABVP, hold them responsible for all the violence in the campuses, for their Hindutva, nationalism and even patriotism of their kind. But to bring her martyred father into this is rather unfortunate, this wordy face book war is rather immature and seems like someone exploiting her innocence and situation for group interest.

Not surprisingly, a social media post appeared connecting Kaur’s statement to underworld don Dawood Ibrahim, (report in SOM dated 28.2.2017) who too can say that it was not he who killed people in 1993 in Bombay but bombs. Not to be left behind, former Indian Cricketer Virender Sehwag shared a picture on twitter holding a placard (like she did) that read, “I didn’t score two triple centuries. My bat did.”

Yes, if you go by Gurmehar Kaur’s logic, then these responses do make sense. Moral: Students in their formative years should not allow themselves to be used by vested groups to create social disturbance or to settle political or ideological score with the opponents. Many “nationalists” and “patriots” have considered her tweet as anti-national so much so the poor girl is threatened of her life by the right-extremists. These liberals and leftists too seem to be as much lacking in tolerance and logic as the rightists and the nationalists. In India, in this context, we see this happening in North India, specially in the Delhi University campuses. In the West we see it happening at the national level — America, England, France, Sweden, Germany, for example.

I pray, our politicians do not follow or get inspired by these University students and endanger our country’s secular fabric, using democracy, as in the western countries I mentioned above where mass immigration was the cause.

To make the confusion worst confounded one senior Supreme Court Advocate says “Shouting slogans like ‘Pakistan Zindabad’ in India is not sedition but shouting slogans like ‘Hindustan Murdabad’ is also just borderline case!” A case of the proverbial “willing to strike but not ready to wound.” Prevarication, Sir. A reasoning similar to saying ‘Heads I win, tails you lose’. A case of counting the trees and missing the wood. Time has come, because of … terrorism, to identify ourself quickly with our own geographical country. Africa for black natives, Western countries for whites, Russia for Russians, China for Chinese, Japan for Japanese, India for Hindus along with members of other religious communities who are born in India and natives, in that order. Of course, the minorities born in the respective countries too will     have those individual country’s identities.

After Donald Trump came to power on the slogan “America for Americans” or “America first”, look what is happening. Immigration laws are not only enforced strictly but also made more stringent to halt immigration altogether, specially from 7 Muslim majority countries.

The Deccan Herald dated 2.3.2017 had carried this item under its column ‘World at a glance’ which should send a message to our students and also to “liberals, leftists and rightists,” about the impact of terrorism on countries which were otherwise liberal and tolerant. Terrorism has undone those halcyon days of ‘liberty, equality, fraternity, tolerance and freedom.’ Reason: Those who enjoyed these values of democracy and secularism are misusing these ideals and values as we have seen in the so-called ‘Azadi’ cry in college campuses. Now the report:

The home of an Indian in the US has been smeared with dog poop, eggs and hate messages, prompting the FBI to investigate the case as a possible hate crime, PTI reports from New York. The incident occurred in Colorado’s Peyton town. Hateful messages were sprawled all over the home with most of them being racial slurs aimed at the Indian home-owner who did not wish to be named, denver.cbslocal.com reported. “About 10% of the messages were racial slur on us, ‘You brown or Indian shouldn’t be here’ something like that,” he said, adding that it was frightening.

Now let me explain the right to freedom of speech and action as perceived and practiced by our “liberals and leftists’ and its validity in a secular democracy like ours.

Osho Rajneesh in his book “Hidden Mysteries” discusses about what the students in Delhi University are presently discussing or fighting on social media — about whether a man or a woman is independent and free to do what he or she wants, or whether he is bound by his destiny in everything he or she does.

Prophet Mohammed (pbuh) had a disciple named Ali who once asked Prophet Mohammed’s opinion about freedom and independence that one should have and if one is bound by destiny in everything one does.

Ali was puzzled. Prophet Mohammed then said: “If you had wanted, you could have lifted the right leg first (and stood on the left leg) but now you can’t. A man is always free to lift the first leg — it can be whichever he wants — but no sooner has the first one been lifted than the other becomes bound to the earth.”

….So Prophet Mohammed said to Ali that he had all the freedom to lift the right or the left leg first. But once he had exercised that FREEDOM and lifted his left leg (standing on his right leg) he was incapable of lifting the other (right) leg. So freedom is there with certain limits, but beyond the limits there is no freedom. Gurmehar Kaur, attention please.