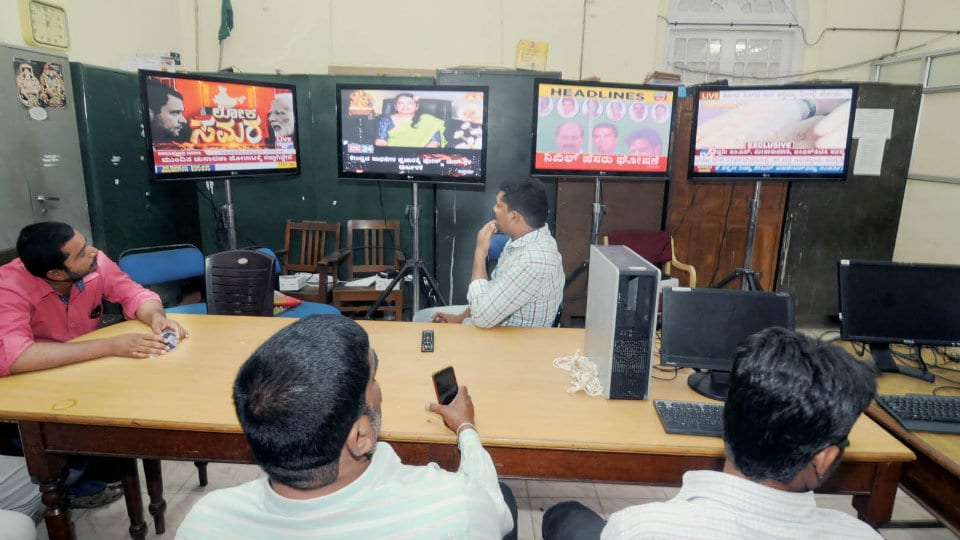 Netas under radar of Media Cell at DC Office

Mysuru: A ‘Media Cell’ or ‘Media Centre’ has been set up in city to monitor media publicity indulged by political parties in the run up to the Lok Sabha polls and to report if there are any violations in the Model Code of Conduct. The Cell has been set up at the Office of the Assistant Commissioner in the premise of DC’s Office at the Court Hall and it is based on the guidelines issued by the Election Commission of India (ECI) that has asked all District Election Officers to constitute Media Certification and Monitoring Committee (MCMC) to monitor poll publicity, advertisement money spent by candidates and paid news.

Four TV screens have been set up at the Cell and it will have six more once the Election Notification is issued on Mar. 19 for the First Phase where Mysuru-Kodagu Parliamentary Constituency will vote. The MCMC will also have two supporting Cells – Media Monitoring Cell (MMC) and Monitoring Certification Cell (MCC).

The MCMC is headed by Additional Deputy Commissioner Anuradha, who is also Assistant Returning Officer and the Cell is run by Social Welfare Officer B.S. Neena. More staff will be appointed for 24/7 monitoring once the notification is issued.

The task of the Media Cell is to watch all television channels, read all newspapers published in Mysuru, monitor social media platforms including candidates’ Facebook, Twitter and What’sApp and record all the messages/ programmes and submit a report to Deputy Commissioner Abhiram G. Sankar, who is the District Election Officer, if there are any violations. The DC, in turn, will report the same to the Election Commission of India.

Once the notification is issued, the Media Cell will function 24/7 and in three shifts. All National and State TV channels and local TV channels will be watched and recorded.

Focus will be on channels that are owned by political parties for election publicity and if they are favouring a particular candidate.

The Cell has the responsibility of screening all newspapers and the persons are supposed to read newspapers and cut the clippings in case of violation and report to the District Election Officer. Based on the Election Commission’s directive, newspapers, TV channels and social media platforms will be continuously monitored so that the Model Code of Conduct is established. The Cell has to ensure that publicity mediums are not misused.