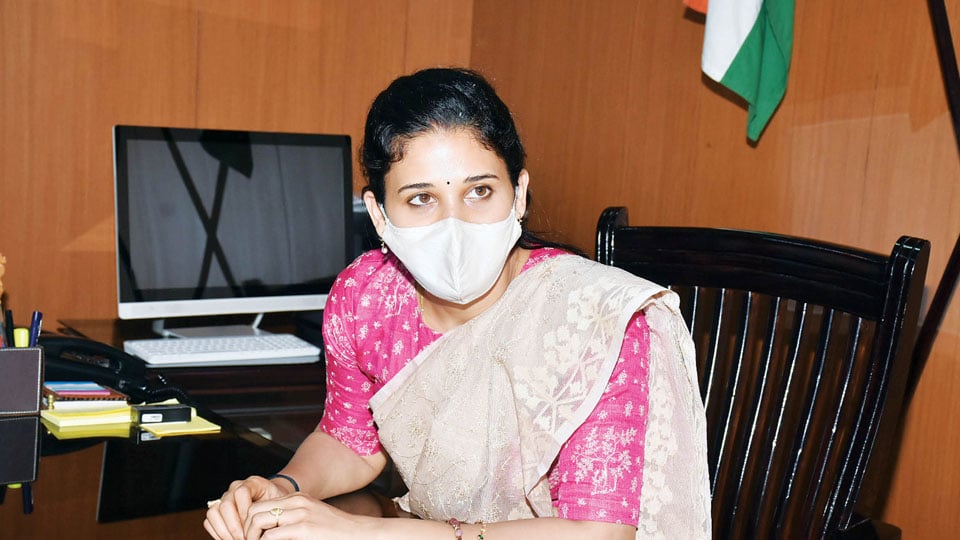 She replaces B. Sharat, who had assumed charge as Mysuru DC on Aug. 29, 2020. Now Sharat has been transferred without posting.

A native of Andhra Pradesh, Rohini is the second new DC for Mysuru in just over a month. Earlier, DC Abhiram G. Sankar, who was appointed in 2018, was transferred as Director of Administrative Training Institute (ATI), Mysuru, on Aug. 28, 2020.

Speaking to press persons after assuming charge this morning, Rohini Sindhuri said that she came to Mysuru at about 8.30 am today and drove straight to Chamundeshwari Temple atop Chamundi Hill and sought the blessings of the deity.

Later she visited Tripura Sundariamma Temple at Uttanahalli on the outskirts of the city and offered prayers to the deity.

Noting that she was not new to Mysuru as she had undergone training at the ATI on Lalitha Mahal Road here in her early days of her career, Rohini said that there were two immediate challenges before her — one is tackling COVID-19 that is spreading fast in Mysuru district and the second is conduct of Dasara amid COVID crisis, which is very much round the corner.

Highlighting her priorities for checking the spread of the deadly contagion, Rohini Sindhuri said that preference must be given for a wider testing involving a larger population as Rapid Antigen Test (RAT) is crucial for early detection of the virus.

Calling for full co-operation of the people, officials and other stake-holders for checking the spread of the virus, she said that people volunteering for tests is vital for preventing the pandemic and also bringing down the mortality rate.

Reiterating that holding Dasara amid the COVID-19 contagion holds a real challenge for her, she observed that public co-operation was very crucial for solving any issues that are haunting the district.

Rohini Sindhuri, who was until now serving as Commissioner for Religious and Charitable Endowments in Bengaluru, said that she has the experience of serving in Mysuru region as she was the DC of Hassan and ZP CEO in Mandya earlier.