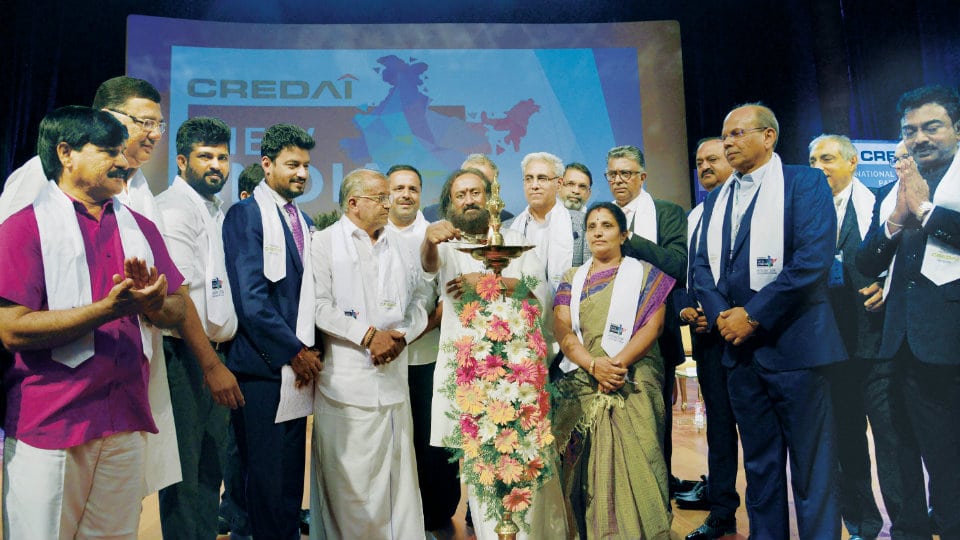 In his address, Ravishankar Guruji said that builders must focus on Green Cities. “Focus must be on plantations and greenery so that the standard of living improves. We must live close to the Nature and must not harm it in the name of development,” he said.

“A human body is like a real estate and its health is vital for the development and longevity of a society. Greenery will help in improving both human health and the health of the society,” Guruji added.

Addressing the gathering, Minister G.T. Devegowda (GTD) said that the responsibility of building Smart Cities across the country rests with the builders. “The Centre has floated the idea of Smart Cities and the onus lies on builders, CREDAI and the Builders Association of India to make the smart cities a reality,” he said.

Giving a pep talk to builders, GTD said that many layouts built these days were not up to the mark. “Most of the layouts deviate from the sanctioned plan and there is no clarity in construction completion and handing over possession to consumers. “This makes consumers lose trust in builders. When the KRS Dam and many structures in Mysuru region built by the Wadiyars have still stood the test of time, we must have a rethink on our quality of construction,” he opined.

Union Minister of Skill Development and Entrepreneurship Anant Kumar Hegde, who was to inaugurate the Summit, did not attend.

It is CREDAI’s second National India Summit (NIS). Hundreds of developers and Real Estate players from across the country are attending the Summit, the theme of which is ‘Emerging Cities, India’s Future.’

Sessions including ‘Trust Building’, ‘Decade Ahead’, ‘Technology and Skilling’ and ‘Happiness Index’ are being held at the Summit.

By organising the Summit, CREDAI aims to realise the true potential of the sector from non-metro cities to increase their contribution to the Indian Real Estate industry.