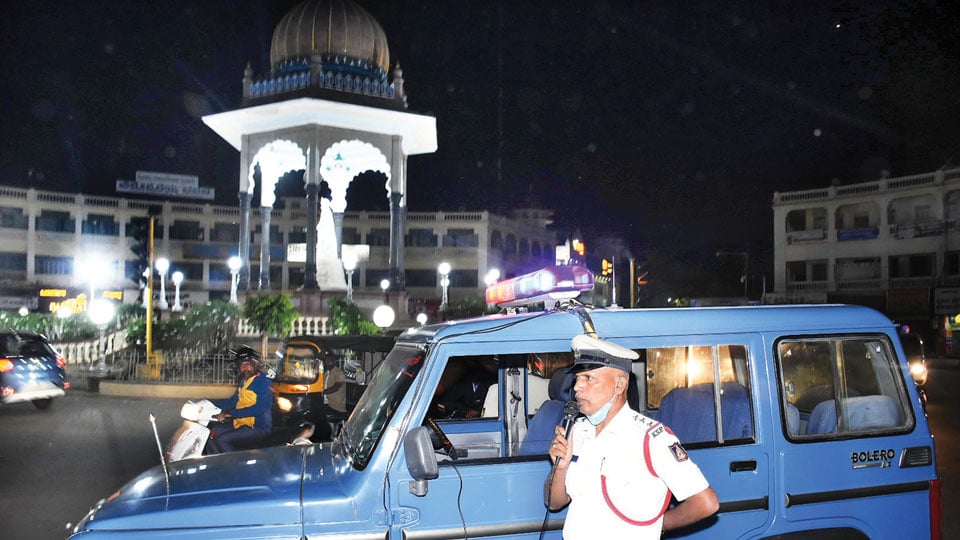 Mysore/Mysuru: As yet another pandemic-hit year comes to an end — on the throes of threats of the third wave of COVID-19 and Omicron infections — Mysureans are preparing to celebrate New Year’s eve in a new normal way they have learnt from the previous year — amidst fear and restrictions.

Many are holding quiet celebrations at home instead of being booked by the Police for night curfew violations. Both the City and the District Police have promised to be on the roads in full force, ensuring that the Government guidelines are strictly implemented.

However, there is no restriction till 10 pm even at Temples and tourists places and after that, there will be only emergency services and nothing else.

House parties or quick trips to farmhouses and resorts on the outskirts of the city or neighbouring States like Pondicherry, Andhra Pradesh and Goa have become the way to usher in 2022. Fewer people are preferring Tamil Nadu as there are restrictions beyond 10 pm and Kerala is last in the preference list as COVID cases are on the rise there.

In fact, many youngsters have planned to ring in the New Year amid the lush green hills in the neighbouring States, notwithstanding the chill and thick fog.

Hotels, pubs and restaurants have advanced their closing time to suit the night curfew and there is a strict 50 percent crowd rule at places where food and liquor are served. However, there are no restrictions on rooms and room service.

Many people are preferring night-long celebrations-cum-stay at hotels, lodges, home stays and resorts. Hotels have reworked their strategy to ask more and more employees to stay through the night, serving their guests.

The local administrations of T. Narasipura, Pandavapura, Kere Thonnur, Kunthi Betta, Muthathi, Srirangapatna and other places have clamped Section 144 from today 6 am till tomorrow 12 midnight to prevent the entry of tourists to water points like KRS backwaters for partying including places like Balamuri, near Sriranganathaswamy Temple, Karighatta, Snana Ghatta, Ganjam and Nimishamba Temple.

There will be no entry to these tourist places, confirmed Srirangapatna Dy.SP Sandesh Kumar, based on orders by Srirangapatna Tahsildar Shwetha Ravindra and Pandavapura Assistant Commissioner Shivanandamurthy.

Almost all bakeries and pastry outlets in the city have reported increased sales since the last two days for decorated delicacies. Some outlets have said that it is tough to fulfil orders as many of them came at the last moment.

Liquor stores — both wholesale and retail — within the city and also outskirts have hit the peak in sales and today, people crowded at the stores early.

Do not drink and drive

City Police Commissioner Dr. Chandragupta has directed all public New Year parties to close by 10 pm. He has also directed revellers to refrain from driving under the influence of alcohol. To that end, many Police teams including Traffic, KSRP and City Armed Reserve would conduct checks across the city.

Private party venues too will be under scanner for loud music, lightings and also DJ parties. “Vehicles driven under the influence of alcohol will be seized. No one will be allowed to violate norms and I would request people to indulge in quiet parties at homes with families,” he said.

Night curfew violation cases will be booked under the National Disaster Management Act and also drunken driving cases will be booked that will lead to suspension or revoking of driving licence, the Commissioner said. Similar measures are in place in the entire district, said Superintendent of Police R. Chethan.