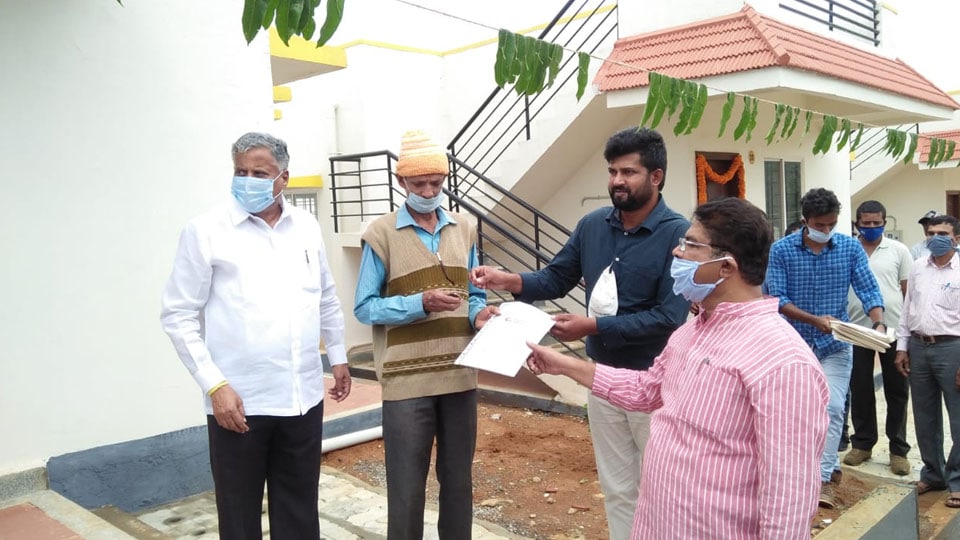 Madikeri: Karnataka Minister for Revenue R. Ashok has said that a Rs. 10 crore grant would be released shortly for construction of a permanent building for ‘Relief Centre’ in Kodagu district which is vulnerable to floods because of its hilly landscape.

According to an official release, the Minister symbolically handed over the newly-built houses to flood victims of 2018 at Jamboor in Somwarpet last evening. He said that whenever the ‘Relief Centre’ is vacant it will be used for Government meetings.

“Four NDRF teams have arrived and will be stationed in Kodagu, Dakshina Kannada, Belagavi and Dharwad districts till the end of monsoon,” Ashok said adding that “the Chief Minister has been handling the COVID-19 situation well”.

The Centre had granted Rs. 1,039 crore for disaster management in Karnataka this year and Rs. 395 crore has already been released, he added.

Kodagu District In-charge Minister V. Somanna said that 463 houses had been handed over to the beneficiaries. Earlier, 35 houses were provided to the flood victims in Karnangeri. As many as 250 houses are being built by Infosys Foundation. Rest of the houses will be handed over soon, he added.

The Rajiv Gandhi Housing Corporation Limited constructed the houses on the sites developed on Government land and each house has been constructed at a cost of Rs. 9.84 lakh. According to the district administration, each house is built on 30X40 sq. ft dimension and has two bedrooms, a hall, and a kitchen. In June last year over 35 houses had already been handed over to the victims at Karnangeri near Madikeri.

Due to the COVID-19 outbreak, there was no formal function and the title deeds were handed over to the victims symbolically. Rajiv Gandhi Housing Corporation Engineer Srinivas said that 383 houses in Jamboor and 80 houses in Made village had been handed over to the beneficiaries.