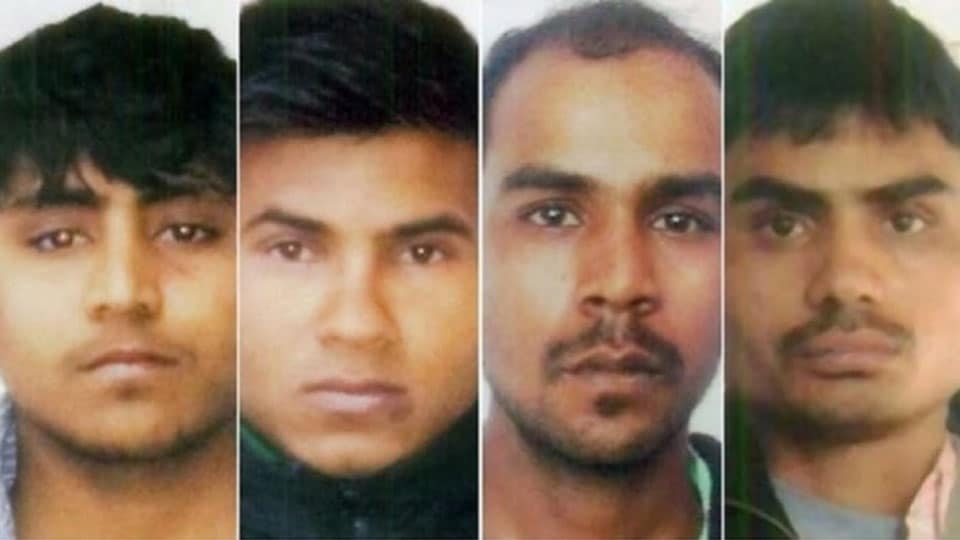 Nirbhaya killers to hang at 6 am on Feb. 1

New Delhi: A Delhi Court yesterday issued fresh death warrants against the four convicts in the Nirbhaya gang rape and murder case. The convicts — Mukesh Kumar Singh (32), Pawan Gupta (25), Vinay Sharma (26) and Akshay Thakur (31) — will now be hanged on Feb. 1 (Saturday) at 6 am.

Additional Sessions Judge Satish Kumar Arora was hearing a plea by one of the four death row convicts in the case, Mukesh Kumar Singh, seeking postponement of the date of his execution scheduled for January 22. He asked the jail authorities to submit a report under Section 840 of the Delhi Prison Rules stating the action taken regarding the mercy petition of Mukesh and regarding the postponement of the date of execution.

Earlier in the day, the Tihar Jail authorities sought issuance of fresh death warrants against the four convicts. Public Prosecutor Irfan Ahmed told the Court that Mukesh’s mercy plea was rejected by President Ram Nath Kovind on Friday and that the same was communicated to the convict. Earlier, the Delhi High Court had refused to interfere with the death warrant issued against the four convicts.

Mukesh had moved the Patiala House Court, informing the Court regarding the pendency of the mercy petition before the President and seeking postponement of the execution date. Judge Arora had issued notice to Nirbhaya’s parents and the State.

Last evening, Nirbhaya’s mother Asha Devi expressed displeasure with the delay in the hanging and said the convicts were getting what they wanted. She has appealed to Prime Minister Narendra Modi “with folded hands” to hang them on January 22 and broke down in an interview as she tore into political parties for using Nirbhaya’s death for their own gain.

The 23-year-old paramedic student, referred to as Nirbhaya, was gang raped and brutally assaulted on the intervening night of December 16-17, 2012, in a moving bus in Delhi by six persons. She was thrown out on the road. After battling for her life for days, she finally succumbed on December 29, 2012 at Mount Elizabeth Hospital in Singapore.

Six accused were arrested in the case. While one of the accused was a minor and appeared before a Juvenile Justice Court, another accused took his life in Tihar Jail.

The remaining four were convicted and sentenced to death by a Trial Court in September 2013 and the verdict was confirmed by the Delhi High Court in March 2014 and upheld in May 2017 by the Supreme Court. The Apex Court also dismissed their review petitions and curative petitions.

Senior advocate Indira Jaising has urged Nirbhaya’s mother to pardon the men on death row who were convicted for the 2012 gang rape of her daughter. Indira Jaising took to Twitter to make the request.

“While I fully identify with the pain of Asha Devi I urge her to follow the example of Sonia Gandhi who forgave Nalini and said she didn’t not want the death penalty for her (Nalini). We are with you but against the death penalty,” Jaising tweeted.

Nalini was arrested and convicted for her role in the assassination of former Prime Minister Rajiv Gandhi in 1991. Asha Devi was quick to hit out at the senior lawyer for her “follow Sonia Gandhi’s example and forgive convicts” statement.

“Who is Indira Jaising to give me such a suggestion? Whole country wants the convicts to be executed. Just because of people like her, justice is not served to rape victims,” Asha Devi said.