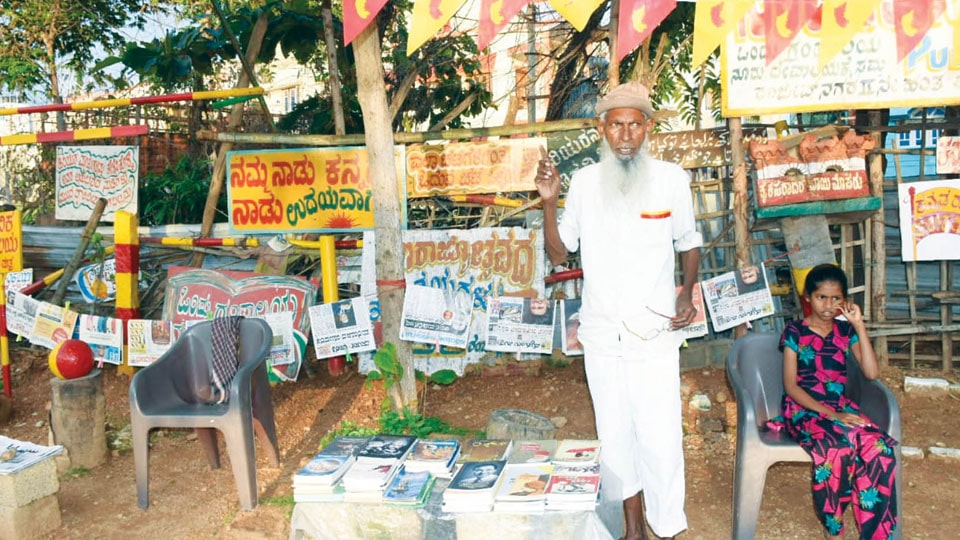 Mysore/Mysuru: Tomorrow is November 1, Kannada Rajyotsava but the Kannada library that was reduced to ashes in April this year in the city still remains in a shambles. None of the promises that were made after the library was burnt were fulfilled and even after seven months, nothing has moved on the construction front. And Syed Isak, the man who had built the library, is helpless. His reading space still functions from the open space and he and his readers have to duck for cover when it rains.

“Now the officials say that there is no money and grants are awaited. I carry over 200 books daily to the library from my home in batches and carry them back in the evening. Even now over 100 people come here daily to read newspapers and books. How can I tell them no? When it rains, I cover the books with plastic sheets,” he told Star of Mysore.

Syed Isak has never been to school but his love for books gave wings to his dream of setting up a library. On April 9 this year, this library at Rajivnagar 2nd Stage — with 85 percent of books in Kannada and newspapers of various languages — was reduced to ashes. Later it was discovered by the Police that an ignited match stick thrown into a sofa repair shop behind the library caused the fire.

Sixty-two-year-old Syed Isak, an underground drainage cleaner, painstakingly set up the library in 2011 to encourage people to read books. And the library became popular too. “My Kannada library is located in an area where there is a majority of the Urdu-speaking population and Kannada language must be propagated in areas like these,” he said.

Soon after the library was gutted, many online fund-raiser campaigns were launched and many Kannada book publishers, academics and politicians reached out to Syed to help him rebuild his dream. It was announced that the library would be built at the same spot and would be jointly funded by MCC, MUDA and Department of Libraries.

A joint statement was released by officers that said that the construction would be carried out by Nirmithi Kendra. They also said they had not sought donations from the public for constructing the library and an exclusive bank account was opened to keep the donations for the sake of transparency and accountability.

The officials had stated that April 23 had been fixed as the date for laying the foundation stone for the library to coincide with World Book Day. But this did not happen due to Government’s COVID restrictions. Even after the pandemic has eased now, there is no news from the officials.

“Though I was promised that the library would be built at the same spot, till now no foundation stone-laying ceremony has been performed. MUDA has sanctioned the land and the original copy has been given to the Deputy Director of the Department of Libraries B. Manjunath. I was told that the foundation stone will be laid on Aug. 9, the birthday of S.R. Ranganathan, the father of Library Science in India. This did not happen unfortunately,” he said.

“Now they are saying that there is no money for construction unless the grants come. MLA Zameer Ahmed Khan gave me Rs. 2 lakh, MP Pratap Simha gave Rs. 50,000 and Mysuru District Minister gave me Rs. 25,000. I have deposited the money in Karnataka Gramin Bank and have spent Rs. 7,000 for my library needs. I have not spent even a single rupee before and after that,” he said.

Speaking to Star of Mysore regarding the state of the burnt down library, Deputy Director of the Department of Libraries B. Manjunath said that except for the building, everything else is ready and funds are awaited. The estimated cost of the building is Rs. 35 lakh and thousands of books are ready to be given to the library, he said.

“We have opened a separate account at SBI, Mysore Medical College Branch (Account No. No. 40137132558; IFSC Code: SBIN0040875) to receive financial help and to prevent misuse of funds but the account has fetched only Rs. 8,000. Over Rs. 20 lakh had been collected by a lady from an IT company through crowd-funding and that money has now been taken back by the lady herself and credited to the donor accounts,” he said.

He said that the MCC is yet to release the pending library cess of Rs. 20 crore. “Every year Rs. 4-5 crore is collected in the form of library cess and of it, the MCC gives us only Rs. 1-2 crore. Also, there is a backlog of Rs. 20 crore and the Government has asked the MCC to clear the backlog in instalments of Rs. 5 crore per year. This too has not happened,” Manjunath said.

The Dept. of Libraries has a routine budget of Rs. 4 crore including salaries, rent, maintenance, purchases of newspapers and magazines. “How are we supposed to maintain all these if the MCC does not release funds that have been collected as library cess? Also, we have requested Syed Isak to deposit the donations received to the official bank account but he has not done so. We had even assured him that he would be given a temporary job once the new library is constructed. He has not obliged,” Manjunath added.