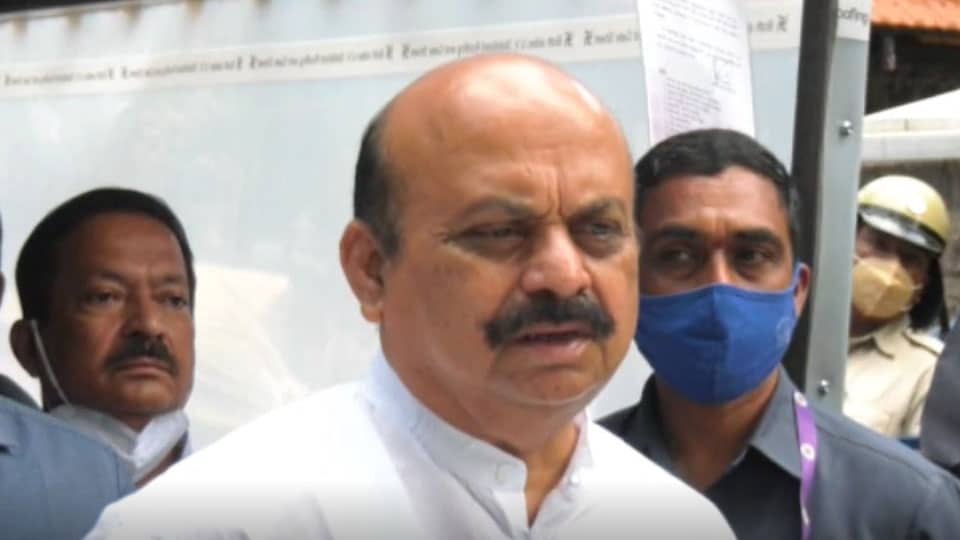 Bengaluru: Chief Minister Basavaraj Bommai has dismissed fears in some quarters over any possible lockdown amid COVID-19 cases in some educational institutions including two Nursing Colleges in Mysuru and the detection of the Omicron, a variant of the virus in some parts of the world.

Speaking to reporters here, the CM urged people not to panic about Omicron and asked them to strictly follow guidelines. He said those arriving from the countries where the Omicron variant was found are being screened at the airports and that they would be allowed into the cities only if they test negative.

Meanwhile, after two people who returned from South Africa tested positive, authorities have made seven days quarantine compulsory for all international passengers and intensified testing and sanitisation at Bengaluru airport.

Health Minister Dr. K. Sudhakar said that the samples of one of the two passengers tested positive for Coronavirus but was “a little different from the Delta variant.”

Airport authorities in Bengaluru have also made RT-PCR and Rapid Antigen Testing for those travelling from other countries and thermal screening compulsory.

The Minister said he was not supposed to say anything officially as he was still in touch with the Union Health Ministry and the Indian Council for Medical Research (ICMR) officials. “There is a Delta variant for the past nine months only, but you are saying that one of the samples is Omicron. I cannot say about it officially. I am in touch with the ICMR and Central Government officials,” Dr. Sudhakar said.

The sample has been sent to ICMR, he said. Refusing to divulge the identity of the man, the Minister said his COVID report shows that he has contracted a different variant. “There is a 63-year-old man whose name I should not disclose. His report is a bit different. It appears different from the Delta variant. We will discuss with the ICMR officials and will let people know by the evening what it is,” the Minister said.

“We will get clear information on Dec. 1 about how the Omicron behaves after the genomic sequencing. Accordingly we will initiate all measures,” he said. Stating that the new variant is visible in at least 12 nations, Dr. Sudhakar said the international travellers will be tested carefully and those tested positive will be hospitalised compulsorily.

On Omicron, Dr. Sudhakar, who himself is a medical professional, said he has also spoken to his classmate doctors working in South Africa, who told him that the new variant is not as dangerous as the Delta variant.

“The satisfying thing I came across after talking to my classmates in South Africa is that this (Omicron variant) spreads rapidly, but it is not as dangerous as Delta. People feel nausea and vomiting and sometimes the pulse rate goes up, but loss of taste and smell is not there. There is less hospitalisation because its intensity is not severe,” he explained.