Home » News » Not only Rajasthan, even Mysuru had a rare pink leopard 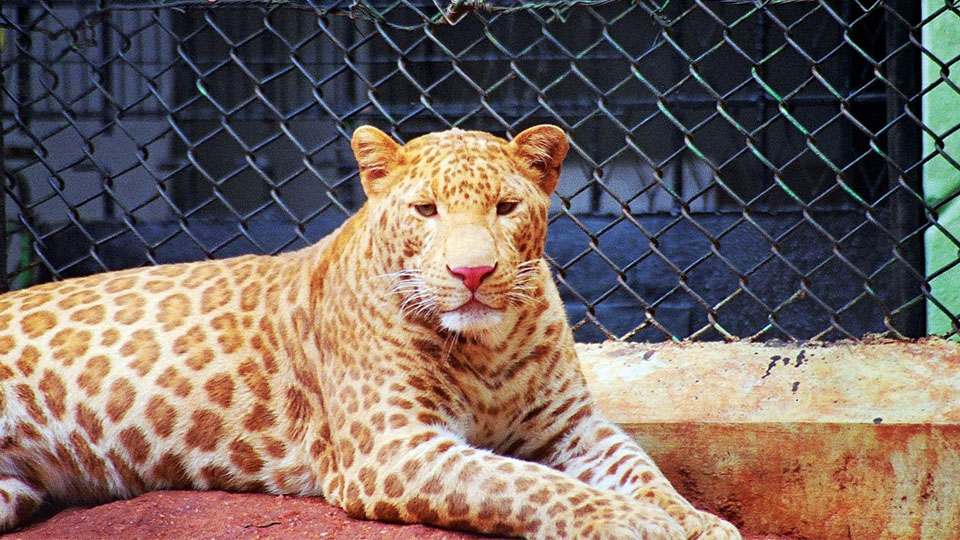 Not only Rajasthan, even Mysuru had a rare pink leopard

Mysore/Mysuru: A rare pink female leopard was sighted in the Ranakpur region in the Pali district of Rajasthan a couple of days back while earlier sighting of the pink leopard was reported from South Africa.

The Indian leopard usually has its coat spotted on a pale yellow to yellowish-brown or golden background. But this pink leopard spotted in Ranakpur has reddish-brown skin and distinctly different spots. Such leopards have been seen in South Africa more than once.

Star of Mysore is bringing up this topic of pink leopard sighted in Rajasthan as Sri Chamarajendra Zoological Gardens or the Mysuru Zoo had once housed such a leopard and it was a centre of attraction from 2001 till 2013. The photos of this rare leopard were taken by city’s eminent Ethologist Ragoo Rao.

“I have taken photos of this kind of a light coloured leopard (not exactly pink but very light coral coloured markings on a very light yellowish coat) at the Mysuru Zoo way back in 2003 September.

“At that time, I had brought it to the notice of the Zoo authorities about the rarity of this mutant leopard individual and suggested they display a board highlighting and quoting the specialty of the leopard, and the only individual variant owned by the Mysuru Zoo,” he told SOM.

Zoo Executive Director Ajit M. Kulkarni confirmed that the pink leopard lived in the Zoo in 2003. “We had named him ‘Pushkar.’ We had received two male cubs from Hassan Forest Division on 23.10.2001 and both were aged two. While one cub was golden in colour, the other was normal. ‘Pushkar’ died on 20.8.2013 due to peritonitis,” he said.

Ragoo Rao said that pink coloured leopard seems so because of skin mutation. “Usually, mutation occurs in black and white colours. I haven’t come across a pink leopard so far since the 1960s. More than mutation, it is called a ‘genetic trip’. No other Zoo in the country had this variant though there are frequent melanistic black leopards,” he added.

“If melanin is deficient due to genetic trip, the leopard turns light in colour and if the same melanin is enriched, it turns black (an increase of dark pigment in the plumage) like we have a famed black leopard at Nagarahole Tiger Reserve that is named ‘Saya’ or a shadow,” he added.

Ragoo Rao said that more research is needed to establish if there are any cubs sired by ‘Pushkar’ or the cubs have been received from Hassan, are there more such leopards. “It is an elusive and intelligent big cat and even if it lives in your backyard, you will never know,” he said.