Home » News » Now, walk and enjoy Dasara illumination: ‘No Vehicle Zone’ around Palace from 9 pm to 11 pm till Oct. 4 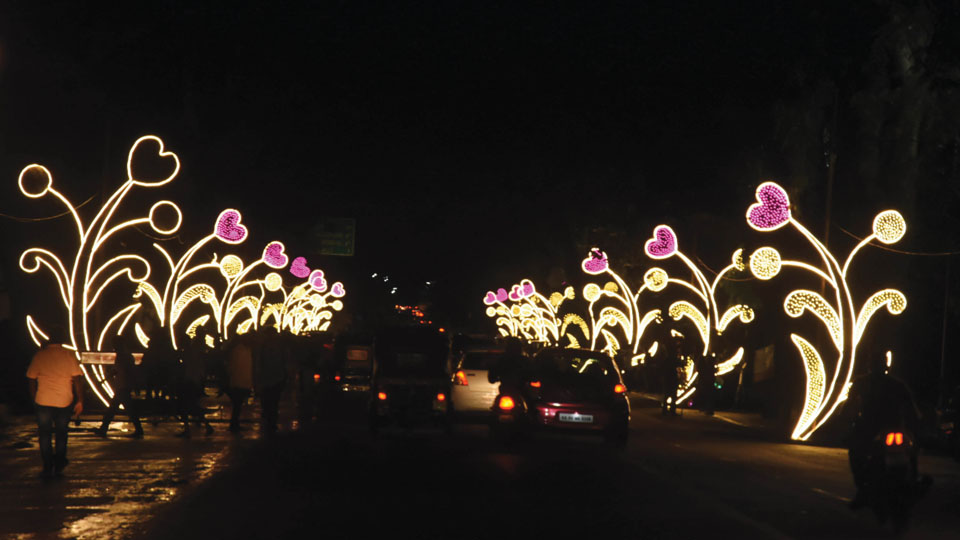 Now, walk and enjoy Dasara illumination: ‘No Vehicle Zone’ around Palace from 9 pm to 11 pm till Oct. 4

Mysore/Mysuru: Following a series of traffic jams and roads clogged with vehicles in the Central Business District (CBD) during Dasara illumination, the City Police have imposed a ‘No Vehicle Zone’ around the Mysore Palace to facilitate visitors to enjoy Dasara illumination from 9 pm to 11 pm up to Oct. 4.

While illumination is a great hit among visitors, the common complaint from people is that they are forever-stuck in the slow-moving traffic for hours with bumper-to-bumper traffic.

On Sept. 10, Star of Mysore had published a report ‘City centre illumination: Police mulling banning vehicles during Dasara’ and the report said that vehicles will be banned around the Palace.

Accordingly, now the Police have issued a press  release in this regard. People can now walk and enjoy the illumination instead of bringing all their vehicles on the roads, clogging the streets, City Police Commissioner Dr. Chandragupta told SOM last evening.

Earlier, the Police were planning to restrict vehicles in the entire CBD, allowing only city buses and ‘Ambaari bus service so that people could take the buses instead of cars but this was not practical. “People throng to the CBD to enjoy the illumination. As most come in private vehicles, vehicular traffic comes to a standstill and causes inconvenience to the people. Banning vehicles for certain hours in certain areas is the only solution,” Dr. Chandragupta said.

124-km road  lit up:  The illumination of the city undertaken by the Chamundeshwari Electricity Supply Corporation (CESC) was inaugurated by Energy Minister V. Sunil Kumar last evening at the ‘Green Pandal’ set up at Sayyaji Rao Road in the presence of Mysuru District Minister S.T. Somashekar and MLA L. Nagendra.

Over 124-km of the city has been lit up including 124 roads, 96 Circles, 28 illuminated models and figurines and welcome arches. Also, many private players have been involved in the illumination, spending about Rs. 4.81 crore and consuming about 1,31,805 units of power.

An illuminated replica of Central Vista (New Delhi) at Doddakere Maidan along with a 3D portrait of Puneeth Rajkumar, Nalwadi Krishnaraja Wadiyar, Chamaraja Wadiyar and Jayachamaraja Wadiyar have been set up and video merging laser technology has been used.

This apart, all the city entry points, Hunsur side, KRS side, Bengaluru, Nanjangud, Mysore Airport side, Bannur and T. Narasipur have been illuminated with welcome arches.

ONE COMMENT ON THIS POST To “Now, walk and enjoy Dasara illumination: ‘No Vehicle Zone’ around Palace from 9 pm to 11 pm till Oct. 4”