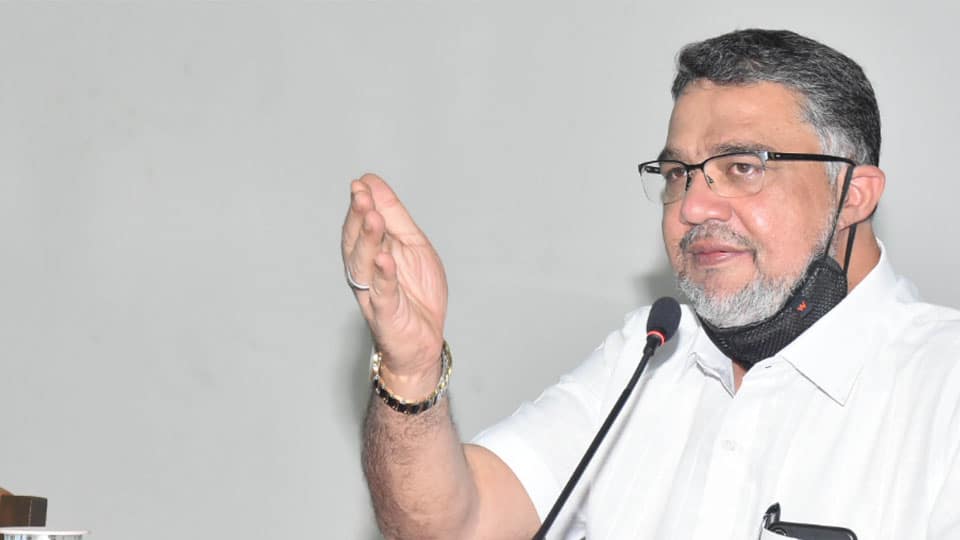 Managing Covid-19 is not easy that too in the current second wave. The situation in city had gone out of control with surge in Corona positive cases and deaths. This necessitated intervention of the city MLAs to get into action to look after the needs of their respective Constituencies. Narasimharaja MLA Tanveer Sait, son of former Minister, Azeez Sait, spoke to SOM to explain his plan of action.

Star of Mysore (SOM): How has been Covid management in your Constituency?

Tanveer Sait: Covid management has been good in my Constituency. Hitherto, Beedi Workers Hospital was meant for beedi workers and cinema workers and that too only for OPD services. After I became Labour Minister, I strove hard for its revival. This Hospital was under the control of Central Hospital for Beedi Workers Welfare Fund and efforts by me for bringing this under State Health Department since 2004, became a reality in 2017. We tried to set up Covid Hospital in this Hospital last year, but it did not materialise. However, in the second wave, I wrote to District Administration explaining the importance of having oxygenated beds. Permission came from the Deputy Commissioner on April 5 to have 250 beds. Now, this Hospital has taken a re-birth. Other facilities will be added in a phased manner. Five ventilators and 15 BIPAP machine have been given to the Hospital by District Health Officer. Preparations are on to start the Maternity Hospital and Mysore Medical College and Research Institute (MMC&RI) has been requested to manage this Hospital.

SOM: How equipped is Beedi Workers Hospital to deal with Covid patients?

Sait: Earlier, there were 60 beds and now MCC has arranged 200 beds. Twenty ICU beds from Mysuru Urban Development Authority (MUDA) and another 20 from Local MLA Area Development Fund have been provided to the Hospital. Medical Gas Pipeline connection has been provided to 100 beds from the MUDA and 50 from MLA fund. A total of 89 oxygen cylinders (50 from DC, 24 from MCC and 15 from District Health Department) have been provided to the Hospital. The work of fixing two Dura cylinders donated by MUDA is underway. A letter has been written to the Government to provide four Dura cylinders before the third wave of pandemic strikes. Chief Minister B.S. Yediyurappa has given consent for the same and issued order in this regard.

SOM: Whether sufficient number of doctors and medical staff are available to treat patients?

Sait: It is a big story. The Health Department had posted 46 doctors and staff to the Beedi Workers Hospital. Among them, only 11 members were reporting to duty. Now, except Dr. Munawar, other 45 doctors have got themselves relieved from this Hospital. Under this situation, MUDA and MCC has posted seven doctors and three nurses. Along with them, 13 volunteers, 12 nursing students, three AYUSH doctors and four private doctors are working. As many as 255 patients have recovered and discharged from hospital, and another 134 are still under treatment. A separate unit has been set up for asymptomatic patients with the help of ‘Q Care’ organisation. There, 20 patients have recovered and 21 are under treatment.

SOM: What about supply of medicine to patients?

Sait: This Hospital has not received a single tablet from the District Health Department. My request to provide medicine under State Disaster Response Fund (SDRF)or through District Health Department, were not considered. Ultimately, I got Rs. 50 lakh released to buy medicine — Rs. 3 lakh each for eight PHCs in Narasimharaja Constituency and Rs. 26 lakh for Beedi Workers Hospital. My friends, relatives and well-wishers donated medicine and equipment worth Rs. 10 lakh to the Hospital. My team is working to provide food, medicine, oxygen concentrators and bed for needy people.

SOM: Are area Corporators co-operating with you to contain the pandemic?

Sait: Elected representatives, officials  and the local people too are supportive in containing the pandemic. All Corporators, former Corporators and friends are arranging food to COVID patients in the hospital. Now, the MCC too has come forward to join hands with us. On an average Rs. 100 is spent per day for each patient for breakfast, lunch, dinner, two times tea/coffee and fruits and MCC is giving 50% of the expenses.

Three ambulances, two from Azeez Sait Trust and one from Yasin Mosque, were helping in shifting patients. KSRTC has provided an oxygen bus. An agreement has been signed with a diagnostic centre for free clinical tests of Beedi Hospital in-patients. Apart from treating infected people, the Hospital is also conducting COVID test and vaccination drive. Also, ‘Covid Mitra’ is functioning round-the-clock.

SOM: How has been the response of citizens in your Constituency?

Sait: Daily wagers and poor constitute a majority of population in my Constituency and all of them are vigilant by adhering to COVID guidelines. They come to hospital in case of symptoms. Initially, the vaccination drive was slow but it picked up pace after religious leaders and local leaders convinced them about the importance of vaccination.