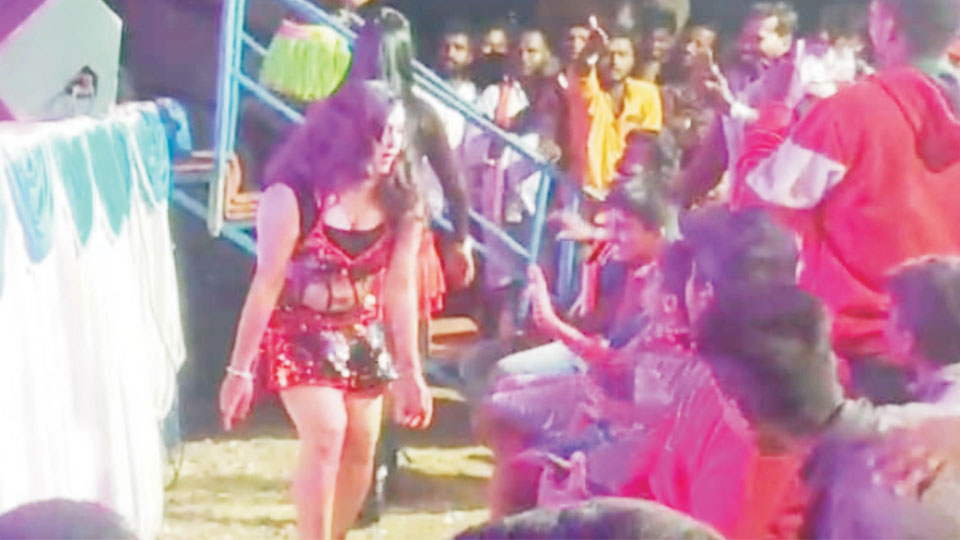 Nagamangala: A group of dancers performing on stage to the tunes of popular Kannada songs is a common sight during election campaigns. Such shows, especially in rural areas, are used to gather crowds to public meetings addressed by key leaders of all political parties.

Nagamangala in Mandya that had become infamous for such vulgar late-night dances a few years back — where a former Legislator was in the dock — is again in news for a similar dance organised at a village festival. Videos and photos of the event have gone viral. Unfortunately, the dance by scantily clad women for movie songs with indecent moves occurred on the International Women’s Day.

The incident was reported at Tholasikombari village in Nagamangala where a festival for the village deity — Maramma — was organised. In fact two stages were erected by the supporters of JD(S) MLA K. Suresh Gowda and former MLA N. Cheluvarayaswamy (now in Congress) and dancers began performing after speeches.

As people arrived to see the ‘cultural programmes’, Cheluvarayaswamy came to the venue and interacted with villagers and his supporters. After he left the place, the former MLA’s actor-son Sachin and  his nephew Sunil addressed the villagers and sought political support in the forthcoming elections.

MLA Suresh Gowda arrived at the second dais at around 10 pm, gave a speech on how the Constituency has developed during his tenure. Soon after he concluded his speech, the dancers arrived on stage and began performing to movie songs.

Unable to comprehend what is being performed in front of them, many women and children soon left the venue, cursing the event organisers for setting up such an event as part of a village deity festival. Many embarrassed women and teenagers expressed anger over the obscene dances.

The events went on till midnight and the youths of the village, some in inebriated state, encouraged the dancers to continue their performance and drooled to the tunes. Political flags were displayed near the dais and some youths danced with flags on their heads.

As the videos and photos of the event went viral, villagers are now demanding action against the organisers for bringing scantily-clad women to perform. Village elders have said that never before in the history of Tholasikombari village such a dance was organised just to garner political support.