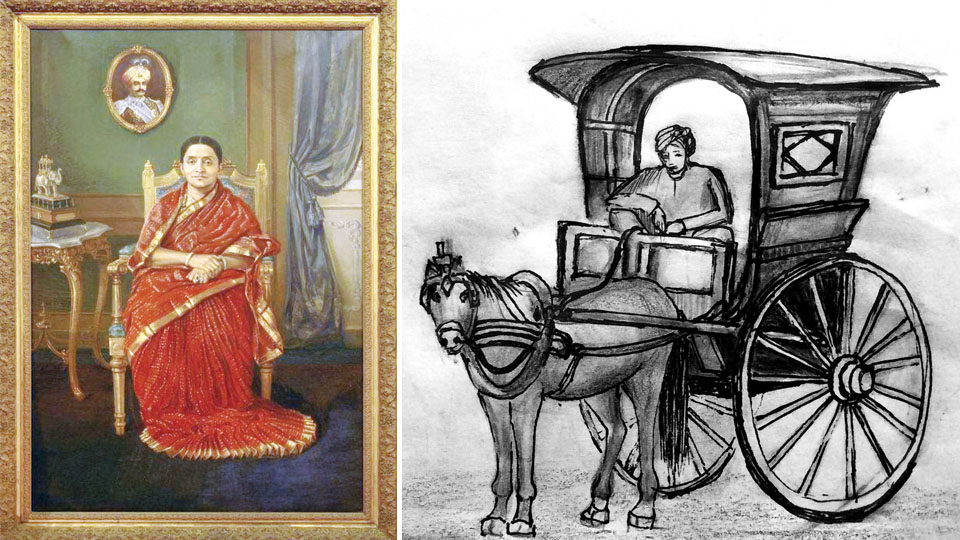 An old memory came back to me recently after seeing a vintage black and white clip on TV about women tennis players. In 1960 I was visiting my parents in Mysore after a year abroad in Burma [Myanmar] where my husband, A. Madhavan, was posted in the Indian Embassy.

Our Ambassador’s residence in Rangoon [now Yangon] had a very good tennis court. My mother, Mukta Venkatesh, decided that I should learn tennis during this vacation so as to play on that court when I returned.

Mysore retained its old graces but had some limitations. Tennis lessons for women were not easy to find. My mother remembered that in the late 1920s and early 1930s she had been an active member of  the Vani Vilas Ladies’ Club in Nazarbad. She somehow managed to get me enrolled there for lessons.

The Vani Vilas Club for women [both European and Indian], was started by Maharani Kempananjammanniavaru [1866-1934]. She was given the title of “Maharani Vani Vilasa Sannidhana” on her marriage at the age of twelve to Chamarajendra Wadiyar, aged 15, who was the Maharaja of Mysore. She was the educated daughter of Narasaraje Urs from an aristocratic family in Maddur.

Tragically her husband died of diphtheria on a visit to Kolkata at the age of 31 in 1894. She was left with her ten-year-old son, Krishnarajendra Wadiyar, who was the heir to the throne, and several smaller children to look after.

She was appointed by the British as Regent to the heir until he attained majority. She governed the State with competence and conscientiousness, helped by the Dewan and advisors; promoting women’s welfare and establishing hospitals.

Later, when the Old Palace burned down, she commissioned the British architect, Henry Irving, to rebuild it. A magnificent new building was created, an icon of Karnataka to this day.

Mukta had happy recollections of her visits to the Vani Vilas Club. She recalled spacious rooms with fine furniture. It was set in a large garden and the privacy of the members was strictly maintained as some Ursu ladies maintained “purdah.” The Maharani would herself visit the Club. Mukta was one member who dared to agree to play chess with her on several occasions. She said later that she could not “checkmate the Queen”!

Mukta’s abilities as a painter were appreciated by the members. A royal visitor from North India was feted with gifts and mementos at an event in the Dasara Exhibition where Club members participated. A decorated sandalwood plaque was produced for her to sign her name and the date with a fountain pen. She did so with a flourish but dated the month “Octumber.”

The ladies hid their dismay but later appealed to Mukta for help. The ink had already spread along the grains of the wood. Mukta covered  the smudge with her Windsor and Newton paints, mixing colours to match the sandalwood shade. The writing seemed a little sprawling but the spelling was corrected.

My own appearances at the Club were more humble. I would go to the tennis court in a hired tonga, driven by Lingaiah. He wore a red cotton square with white checks favoured then rural folk as a turban. He minded my telling him not to whip the pony to make it go fast; “I beat my children, I beat my horse. But I love them nevertheless.” And we would jog slowly along, Lingaiah hunched over the reins in sulky resentment. Later I found he had a quirky humour, naming his horse ‘Gita Bali’ after a film heroine, and we parted on friendly terms.

I would go “decorously” dressed in handloom cotton sarees bought by my father, M. Venkatesh, in Mani Textiles in K.R. Circle. The saree had to be worn high above the ankles to facilitate “running.” The pallu was tucked into the waist band. White cotton socks and tennis shoes completed the outfit. The socks quickly became brown from the dust of the court. The elasticised tops, so tight at first as to leave cicatrices around the ankles, loosened with every wash until they resembled overblown tulips.

A young woman shared the lesson with me. She was very pretty but wore a wig with a black waxy base to which untidy, coarse black hair was attached. Chemotherapy or its side effects was unknown then. Better known was that an attack of typhoid [known as “Thingal-Jwara” or month long fever] could cause one to lose hair. It made me sympathetic to her. We were partners on one side of the net, the Marker teaching us was on the other. She did better than me and after a while I gave up the effort. But I still retain a memory of the politeness in speech and behaviour of the ladies of those days; a life conservative and custom bound, but gracious and leisurely nevertheless.