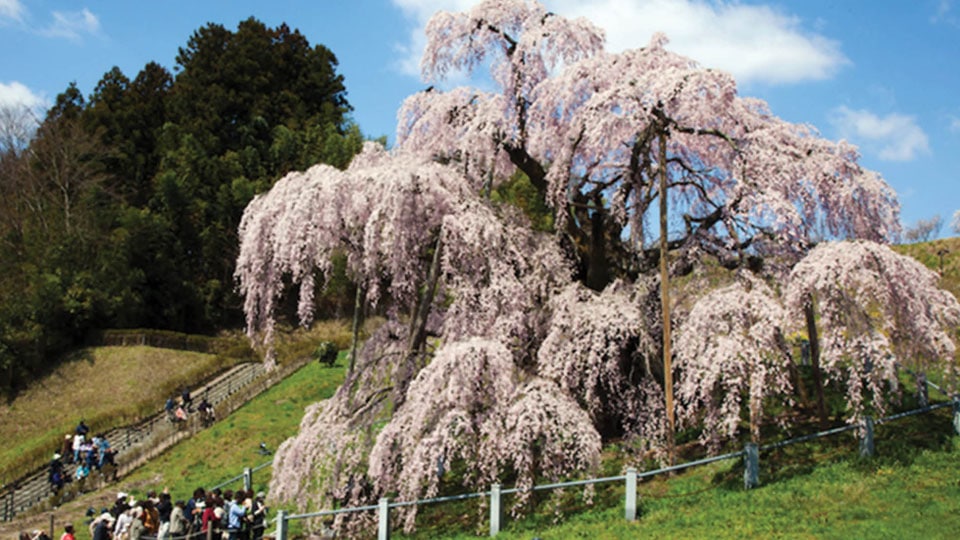 Cherry blossom, “Sakura”, is the national flower of Japan. In spring, the trees begin to bloom. Japan waits for the pink and white tide, starting in the warm tip of Okinawa, to spread over the country and finally reach the heights of cold Hokkaido.

Newspapers print the cherry blossom forecasts of various cities. This year the buds opened in Tokyo on 21st March 2019 and were at their prettiest on 27th March. “Hanami” is celebrated by family groups,  office workers, friends and students. They gather under the flower laden branches, singing, listening to music, their “Bentos” [lacquer-ware lunch boxes] filled with delicious snacks, washed down by Sake wine.

Sakura belongs to the genus “prunus serrulata.” They do not produce edible fruit, only small, sour ones that birds enjoy. Sakura is mainly a  feast for the eyes not for the palate.

In Buddhism and Shintoism there is a reverence for trees, specific species are planted around places of worship. In Japanese formal gardens,  azaleas, maples and pines are favoured but the Sakura has a much greater significance in itself; representing to Japanese people the sublime spirit of the country.

The blooms are ephemeral; a symbol of the impermanence of being. The brief existence of these flowers is compared to the short and dramatic lives of the samurai warriors. The beauty of life is said to be in the moment of ecstasy, as in the love poems of Heian period; or, more poignantly, in the farewell letters of the Kamikaze pilots [suicide bombers of the second world war] to their loved ones. The sakura icon was also emblazoned on the fuselage of their aircraft in their flight to  death as a metaphor of  reincarnation.

Lafcadio Hearn [27.6.1850 to 26.4.1904], a writer of Greek-Irish origin, was a lover of Japan. He wrote about Japanese society, culture and literature. He wrote a touching story based on a local tale of an old Samurai saddened by the dying of his favourite Sakura tree. He committed ritual suicide at its base so that the tree may live and bloom on each anniversary of his death.

READ ALSO  A Toast to Diplomats

In feudal times the warlords or Daimyo, aristocrats and wealthy Samurai cultivated ornamental or exotic cherry trees on their estates. But with modernisation, these lands were given over to mulberry cultivation, tea gardens and industries. The great Kanto earthquake of 1st September 1923, combined three disasters in one; first the earthquake, then a huge tsunami and finally a fire ball fanned by strong winds, tearing through wooden homes. The quake and its aftermath reportedly took a toll of over 1,40,000 lives. The Japanese Government rebuilt the quake ravaged areas with sturdy concrete buildings, destroying more cherry trees. Many rare varieties wasted away. Collingwood Ingram [30.10.1880 to 19.5.1981], a British ornithologist and plant-collector, saved some cherry trees. He visited Japan briefly in 1926 and was obsessed with propagating cherry trees during his long life.  His story has been written about and published by Naoko Abe [a Japanese journalist based in London], first in Japan with the title: “Cherry Ingram: The Englishman who Saved Japan’s Blossoms.” An American edition titled  “The Sakura Obsession” was published this year.

On 11th March 2011, an undersea earthquake of a magnitude of 9.1 hit the Pacific coast of Tohoku raising a destructive tsunami which damaged the Fukushima Daiichi Nuclear Power Plant complex causing meltdowns in three reactors. Thousands of residents in nearby areas had to be evacuated. The decontamination efforts will have to continue for years.

“Scroll.in” reports that a team of researchers visited Fukushima in March 2017; the vegetation had been removed, hills covered in concrete. Yet, here and there in the nuclear ravaged landscape, cherry trees were in bloom. A Japanese engineer told the team that the trees would stay even if they hampered the movement of the equipment for decontamination; the blooms a symbol of reincarnation, the life force itself.

Of special significance to the Japanese is the 1000-year-old cherry tree in Miharu, Fukushima Prefecture. Called “Miharu Takizakura,” crowds visit this weeping cherry tree with its cascades of flowers. It symbolises continuity through the ages.

A young woman, Yumiko Nishimoto, was evacuated in 2011 from her home near Fukushima after the nuclear accident. She was able to return only in 2013. She started the “Sakura Project,” making a nationwide appeal for 20,000 cherry saplings to plant along the prefecture’s coast line. Many eager volunteers responded to her appeal, restoring hope for the future.

Since 2012, the Japan Broadcasting Corporation [NHK] has organised the Fukushima Cherry tree photo competition. This night picture of the Sakura under the Moon  was titled “The miraculous cherry tree.” To celebrate the Sakura season next year, an Olympic torch relay  will start from Fukushima on 26th March 2020, a 121-day trip around Japanese prefectures during cherry blossom time.

From 1985 to 1988 my husband, A. Madhavan, was the Indian Ambassador to Japan.  Our Embassy, 2-2 11, Kudan Minami. Chiyoda-kuin Tokyo, is by the Chidorigafuji Park. Here the branches of the Sakura trees in the avenue sway over the Imperial Moat, dropping the petals on the water, an ethereally lovely sight. The fragile Sakura represents life, death and renewal, a “timeless metaphor of human existence.”