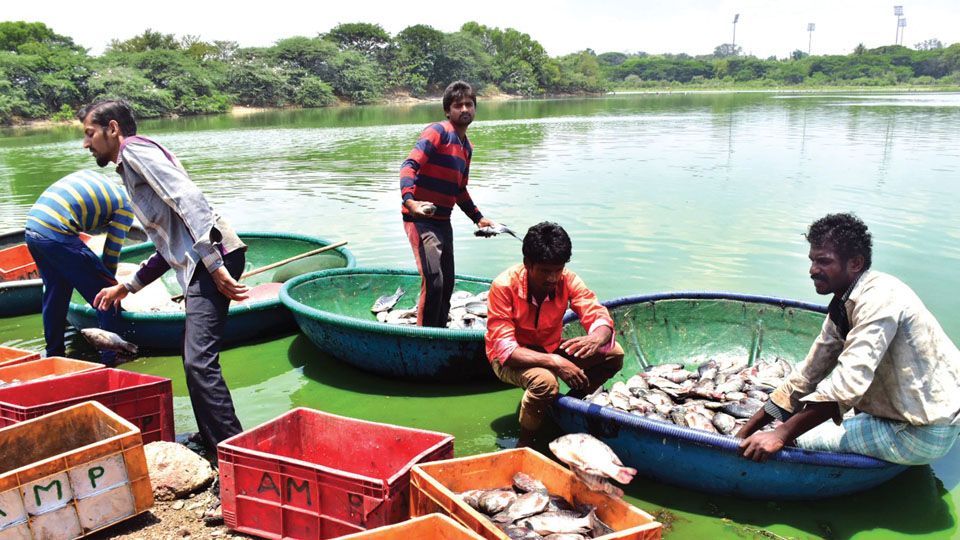 Birds will go without food as even Karanji Lake, Lingambudhi Lake have gone dry, say bird-lovers

Rampant and large-scale fishing at a time when the iconic Kukkarahalli Lake is fast drying up has enraged environmentalists, morning walkers and bird lovers. Several green activists have told Star of Mysore that fishing activity is taking place in the Lake since the last one week and tonnes of fish are being carried away from the Lake both in the morning and evening.

A reality check by SOM revealed that fishes of all sizes and varieties including Tilapia and Cat Fish are harvested on a daily basis at the Lake and men operating more than 10 coracles are netting the fish. After fishing, the fishes are loaded into plastic containers and are transported to different fish outlets and markets in city.

What has angered green activists is that fishing is carried out at a time when the water in the Lake is fast depleting due to summer heat.

If fishing continues in this scale, the bird population will die, they say. “The Karanji Lake has gone dry and even the Lingambudhi Lake. Birds that were depending on fish food at those lakes are coming to Kukkarahalli Lake to feed and they are left with no food,” said   D.H. Tanuja, an avid bird watcher and a regular visitor to Kukkarahalli Lake.

These days, bird species like Painted Stork and Herons, Pin Tail and Shovelers are found in abundance at the Lake and there are chicks, juveniles and adult birds and all of them need fish to survive. “Unfortunately through rampant fishing, we are breaking the food chain of the birds,” she said.

While the authorities concerned defend the move of fishing saying that only big fish are being caught, bird lovers are questioning who will monitor the size of the fish being caught. “In Karanji Lake, Zoo authorities and forest officers regularly check the net size before fishing and there is strict monitoring. But here in Kukkarahalli Lake there is no monitoring at all and all sizes of fishes are being caught with the sole intention of making money,” Tanuja added.

“We are not against fishing but the authorities must be sensitive to  the survival of all the species. Even birds need food. We suggest a temporary ban on fishing till the lakes are filled up,” she said.

Reacting on the issue, Deputy Conservator of Forests Dr. Prashanth Kumar told SOM that the Karnataka Fisheries Federation releases fishlings to the Lake and the Federation has got the contract of fishing in the Lake for five years and annually, the University of Mysore, that is the custodian of the Lake, gets an    income of Rs. 6 to Rs. 8 lakh.

Fishing is done by the men contracted by the Federation twice a year and this is not a breeding season. However, the fishermen are catching only large fish and even their nets are designed in such a way. Smaller fish are not caught and they are there for the birds to feed on. If the fish outgrows, it will die and the carcass will pollute the lake leading to more fish death. We can’t ban fishing and I will ensure that the conditions laid down in the fishing tender are followed,” he said.

Prashanth Kumar added that mechanised boats are not used and the Federation has been asked to use coracles and rowing them makes the stagnant water move.

On the concern raised by bird lovers about fishing in summer season, University of Mysore Registrar Prof. Lingaraja Gandhi said that he will look into the issue and if the fishermen were found violating the tender rules, action will be taken.

“There was a huge sewage flow into the Lake from Paduvarahalli since the last three days and morning walkers were facing unbearable stench. The University complained to the Mysuru City Corporation and they found that a sewage pipe had been broken along the Lake side and now it has been repaired,” the Registrar added.