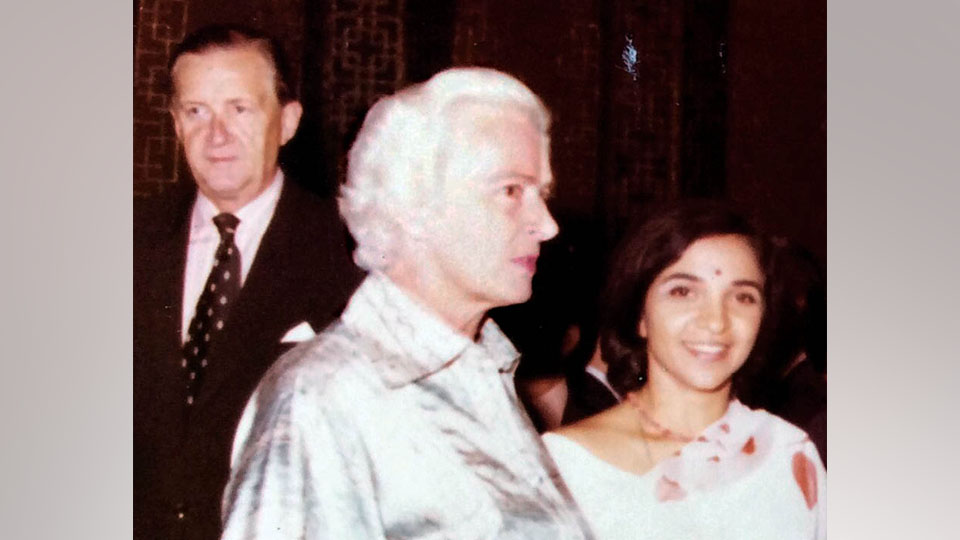 There was detailed coverage on TV channels recently of the wedding of Prince Harry and Meghan Markle at St. George’s Chapel, Windsor Castle. I could identify Priyanka Chopra in a pale pink hat and dress, Amal Clooney, George Clooney and Sir Elton John among the guests.

The formal dress code for this occasion was lounge suits or uniforms for men and afternoon dresses with hats for women. The sight of all the stylish headgear of the elegant ladies brought back to mind a garden party in Buckingham Palace many years ago. 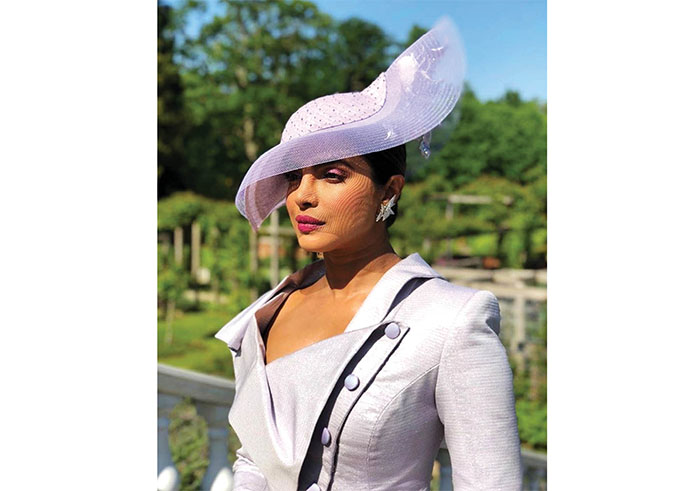 Priyanka Chopra at the wedding of Prince Harry and Meghan Markle.

In London in the early 1970s, my husband and I were members of the High Commission of India. During the years that we were in London we went to two events at Buckingham Palace. First we attended a Garden Party along with other diplomats, noting the prescribed dress for the occasion. The sari saved us womenfolk from the problem of hats, gloves and frocks. The Indian diplomats wore Achkans; our Military, Naval and Airforce Attaches were resplendent in uniforms. A large number of invitees assembled on the spacious lawns. The Royal family arrived to the strains of their National Anthem.

Guests moved to white marquees where tea was served. There was “Victoria Sponge Cake” [created in honour of Queen Victoria] as well as other cakes and thin, dainty cucumber sandwiches with crusts removed. Fresh strawberries and cream with a dusting of powdered sugar, were a summer treat. Near the table, a cup and saucer in her hand, stood a beautiful Indian woman in a blue-green Kanjeevaram sari. I recognised her as Film Star, Vyjayantimala, and was able to speak a little to her in Tamil! 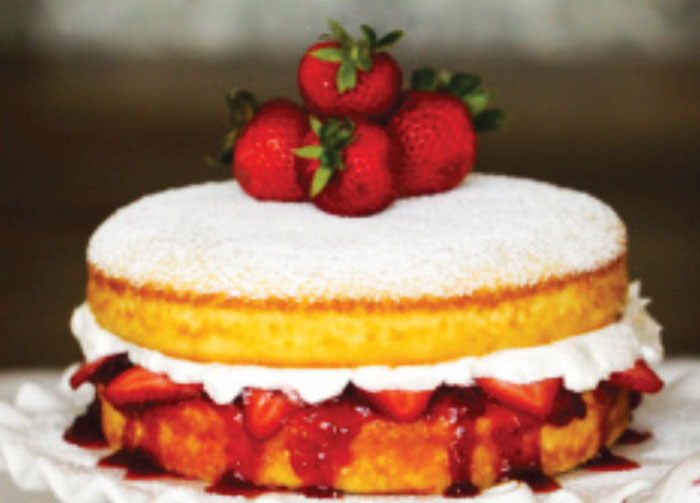 At the Christmas party, we filed past the reception line of the Royal family to the Queen who shakes hands with gloves on. A Namaste from me took the place of a courtesy [a bow] made by some Commonwealth diplomatic women.

Our next post was to Hong Kong, called “British Crown Colony” then. The UK transferred the sovereignty of the island to the People’s Republic of China on 1st July 1997.  At that time the Governor of Hong Kong was Sir Murray MacLehose [later titled Baron MacLehose of Beoch]. He and Lady MacLehose gave parties with varying degrees of formality [from White tie to Black tie] where our own National costume again came to the rescue.

The Queen and the Duke of Edinburgh were due to visit Hong Kong in 1975.  In May that year we received an opulent red and gold four-folded envelope. 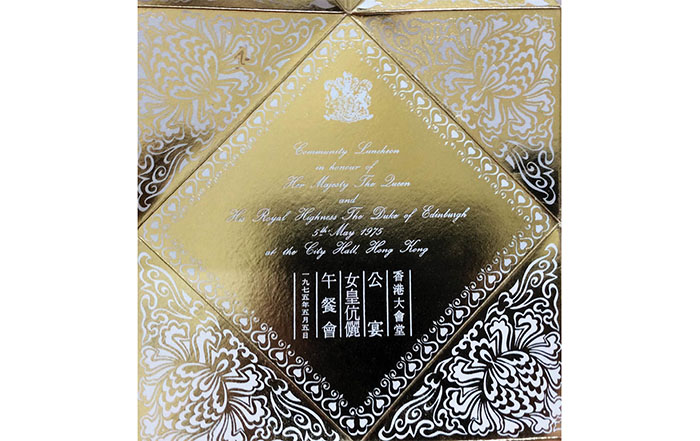 The Invitation to the Luncheon in honour of Queen Elizabeth and the Duke of Edinburgh.

Her Majesty The Queen

The Duke of Edinburgh

At the City Hall, Hong Kong.

Inside on a vermilion card was the Menu for the Luncheon: 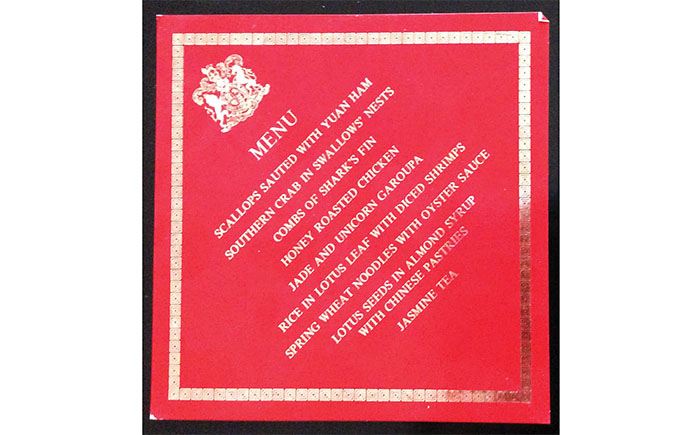 The menu of the Luncheon in honour of the Queen and the Duke.

Over the years, “Shark’s Fin” has been a star item of Chinese banquets. Recently animal activists have protested against culling the fins which has meant killing large numbers of sharks.

“Birds Nest” too is greatly prized in Chinese cuisine. These are the brittle cup-like nests of swallows or swifts, built by the birds with their saliva and abandoned after the chicks have hatched and flown away. They are used in soups and other dishes, prized as both exotic and expensive.  They are found in places which are inaccessible and dangerous to garner. Environmentalists do not protest about their use as the birds have left these nests.

The tables were laid with silver cutlery as well as the traditional chopsticks, the food served in exquisite Chinese plates and bowls. Among the guests were English women in dresses, gloves and hats; Chinese women in “Cheongsams” [tight fitting high-collared dresses with slits on the sides of the skirt], opulent with glittering rings and jewellery, diplomats and their wives in their national costumes. The meal began and ended with the British National Anthem.

At such major events one of the Chinese invitees would be Run Run Shaw, movie Mogul and philanthropist. He had several other Chinese aliases but this name was most widely known, he popularised Kung Fu films with the star, Bruce Lee. A remarkable personality, Run Run Shaw lived to the age of 106. We attended a couple of dinners at his invitation; exquisite food followed by a show of the latest films in his home theatre. He once contacted my husband, A. Madhavan [who was then heading the Commission of India, Hong Kong], saying he was producing a new, macabre film and needed help. He knew we had many birds in India, including crows. Would it be possible to obtain a large number of crows for a scene in his film? Madhavan explained to him that trapping and transporting these birds in large numbers would be extremely hard, infringing both Indian and Hong Kong quarantine rules. We did not hear from him again.

The British monarchy is relaxing its conservative conventions. Hong Kong politics have changed over the years. But the memory remains of glittering city-scapes, misty mountains sloping down to the South China Sea and boat masts making crisscross patterns at marinas.  Oriental traditions cohere with opulent Western lifestyles here.