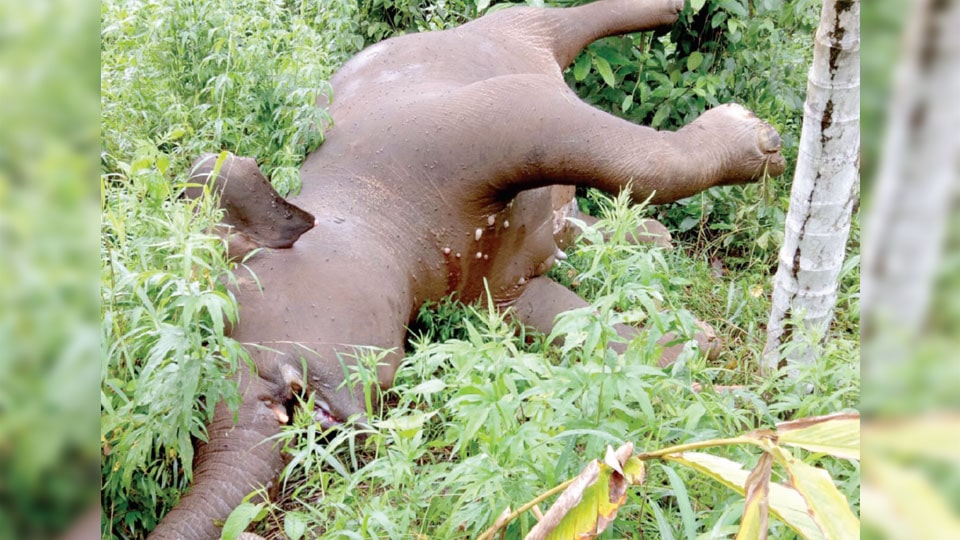 Siddapur: Close on the heels of six elephants dying of electrocution in Kodagu, one more elephant died of the same cause yesterday taking the toll of elephants in July alone to seven.

A 12-year-old female elephant was electrocuted at Abyathmangala. A dry tree was found fallen on electricity wires and this might have caused the death. The carcass was spotted by some officials from Chamundeshwari Electricity Supply Company (CESC) when they had been to the spot to repair fallen power lines due to incessant rains in the district.

The CESC officials alerted the Forest Department staff and District Forest Officer (DFO) Suryasen visited the spot. The DFO felt that many elephants were being electrocuted as trees near electricity poles were not cleared. Instead of taking preventive measures from the Forest Department to prevent the entry of wild elephants into private coffee estates, the DFO chose to shift the blame on coffee planters and CESC staff. He, however, claimed that the Department, despite being short-staffed, was taking several measures to drive the wild elephants back to the forests.

Claiming that coffee planters were not co-operating with the Forest Department, he said that it was the responsibility of the planters to clear dry and fallen trees from their estates after informing CESC officials. Fallen trees are good conductors of electricity and it kills elephants when they come foraging for leaves, he added.

2 COMMENTS ON THIS POST To “One more elephant electrocuted in Kodagu; July toll 7”