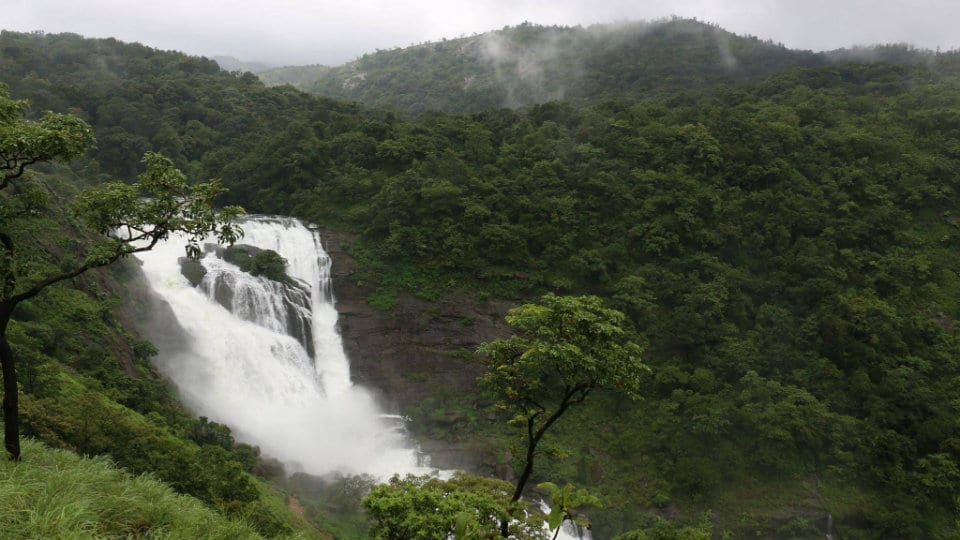 It’s raining in Kodagu and you won’t get a better place to spend your weekends and holidays amidst tranquil, pristine and serene atmosphere. The lush green surroundings and tourist spots have been beckoning tourists who are ready to spend a day or two amidst nature.

Kodagu is also home for a number of waterfalls which is a must-visit, especially during this monsoon season.  This Weekend Star Supplement takes our readers on a sojourn to some of the best waterfalls in the lap of Kodagu.

This Monsoon, fall in love with Waterfalls in Kodagu

It’s raining in Kodagu and you won’t get a better place to spend your weekends and holidays amidst tranquil, pristine and serene atmosphere. Located around 80 km from Mysuru, Kodagu has been a home away from home for many Mysureans. Its lush green surroundings and tourist spots have been beckoning tourists who are ready to spend a day or two amidst nature.

From Mysuru if you head towards Kodagu, via Hunsur you will get Irupu Falls, Nagarahole National Park and the Brahmagiri Ranges and Chelavara Falls and via Kushalnagar you will get Bylakuppe Tibetan settlement, Abbe Falls, Bhagamandala and Talacauvery. And if you move towards Somwarpet, you will get to see Mallalli falls and will also get a chance to scale Pushpagiri Mountains and enjoy the scenic beauty of Mandalapatti, Mutlu and Hammiyala.

Visitors can also enjoy river rafting, trekking and camping at some of the best resorts and home stays which serve authentic Kodagu delicacies. Kodagu is also home for a number of the water falls which is a must visit especially during monsoon.

Abbey Falls is located 8 km from Madikeri and it is around 122 km from Mysuru. The waterfall is located between private coffee plantations with stocky coffee bushes and spice estates with trees entwined with pepper vines. A hanging bridge has been constructed just opposite the falls. 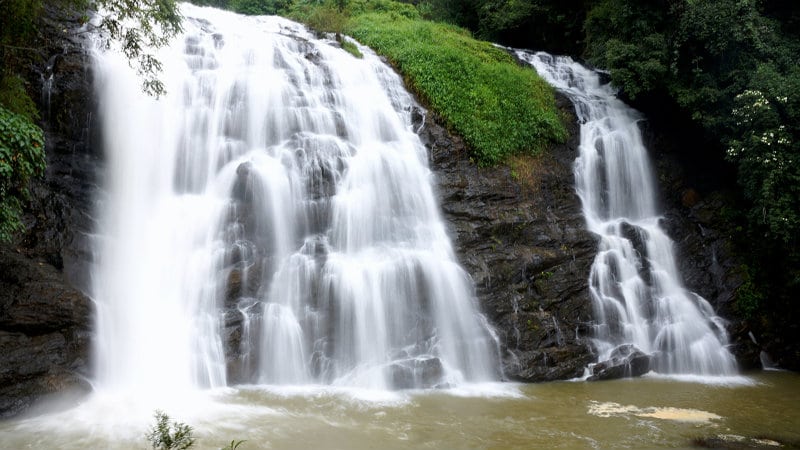 The falls was earlier called Jessi falls, named after a British Officer’s wife. However, the place was a thick jungle area back then. Years later, the waterfall was discovered by Neravanda B. Nanaiah who bought the place from the government and converted it into a coffee and spices plantation that surrounds the waterfall today.

Irupu Falls is located in the Brahmagiri Ranges of Kodagu, bordering Wayanad district of Kerala. It is a fresh-water cascade which is located at a distance of 48 km from Virajpet on the highway to Nagarahole National Park. The falls are also known as the Lakshmanatheertha Falls, derived from Lakshmanatheertha, a tributary of River Cauvery.

Irupu falls is a major tourist attraction as well as a pilgrimage spot. A famous Shiva temple, the Rameshwara Temple, is situated near the Lakshmanatheertha River, en route to the falls. This temple attracts a large number of pilgrims during Shivaratri festival. 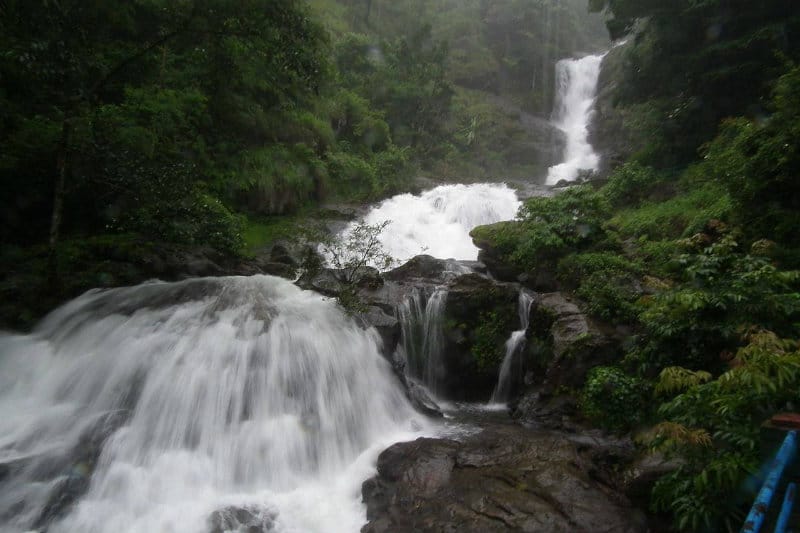 According to popular legend, Rama and Lakshmana passed along the Brahmagiri range while searching for Rama’s wife Sita who was kidnapped by Ravana. When Rama asked Lakshmana to fetch him drinking water, Lakshmana shot an arrow into the Brahmagiri hills, water sprang from the place that was hit by the arrow. This formed River Lakshmanatheertha. Due to this legend, the falls is believed to possess the power to cleanse sins and is visited by thousands of devotees on Shivaratri.

The best time to visit the falls is during monsoon when the falls is at full capacity and is a breathtaking sight. Visitors can take the Gonikoppal-Nagarahole National Park Road and off the Kutta Road after Srimangala.

Chelavara Falls is a natural waterfall formed by small stream, a tributary of River Kaveri near Cheyyandane village which is on Virajpet-Talacauvery State Highway (SH 90) located around 16 km from Virajpet.

The falls is near to Thadiyandamol, the highest point in Kodagu. The falls is visible after walking a few meters in the forest. 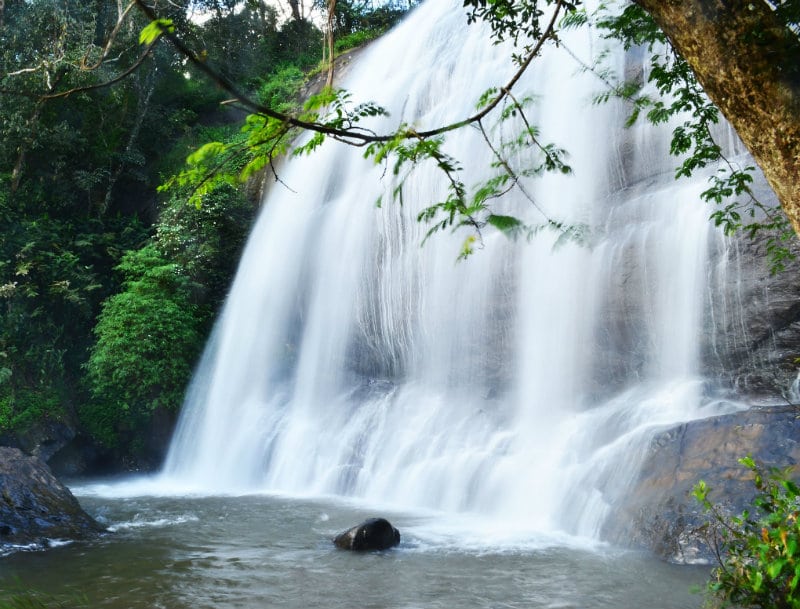 One can easily get into dangerous waters and pulled in. It’s approx 100 ft deep. There are danger signs all over. Local residents advice people not to get into the turbulent waters.

Mallalli Falls is situated in the northern region of Kodagu with River Kumaradhara as the main source for the waterfall. Kumaradhara later flows through Kukke Subramanya and merges with the Netravali River at Uppinangadi, which then empties into the Arabian Sea in Mangaluru. Monsoon as usual is the best time to see the real Mallalli Falls as there will be plenty of water which gushes down from the river and the mist and the green hills around adds to the beauty. The water usually dries up during summer. Better fold your trouser bottoms or you might have a tough time getting rid of the crawling leeches during monsoon.

Thodikana is nestled in the foothills of the Western Ghats in southern Karnataka. It is located in Sullia of Dakshina Kannada district. Thodikana is known most for its Mallikarjuna temple, which was probably built sometime in the 13th century.

A few meters south east of the temple there is a fish tank known as ‘Meenugundi’. Visitors traditionally feed the fish raw rice. Killing fish is forbidden here. 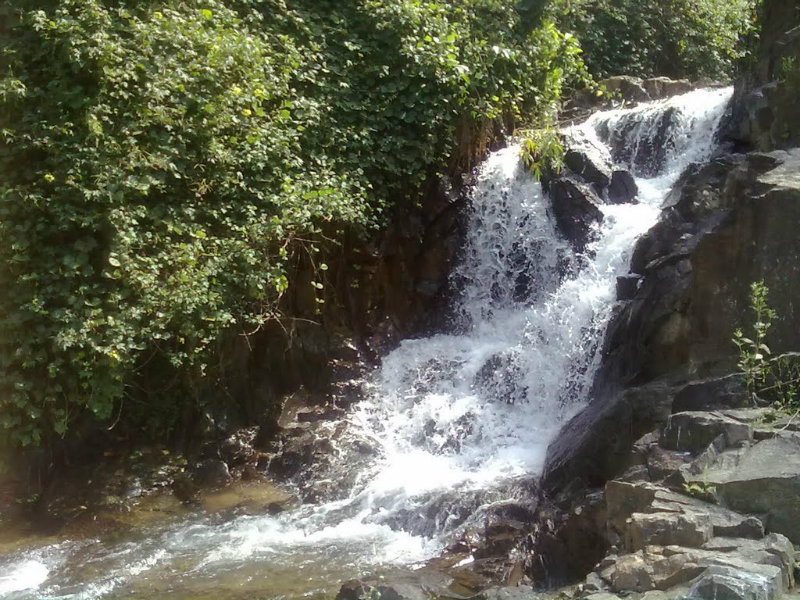 Every day, the temple offers free mid-day meals to pilgrims as prasadam. A waterfall called Devaragundi is situated about 1.5 km from the temple.

Kalyala Falls is located near Sampaje off the Madikeri–Mangaluru Highway. It is visible from the highway. The road leads to a point near the falls and then one has to trek about half-a-kilometre to reach the falls.

At Sampaje, a left deviation will lead to another hilltop called Kalyala. From here, 1 km trek inside a coffee estate takes you to the bottom of the waterfall where a small stream takes a big leap of around 200 ft. The water continues to flow down another 300 ft. 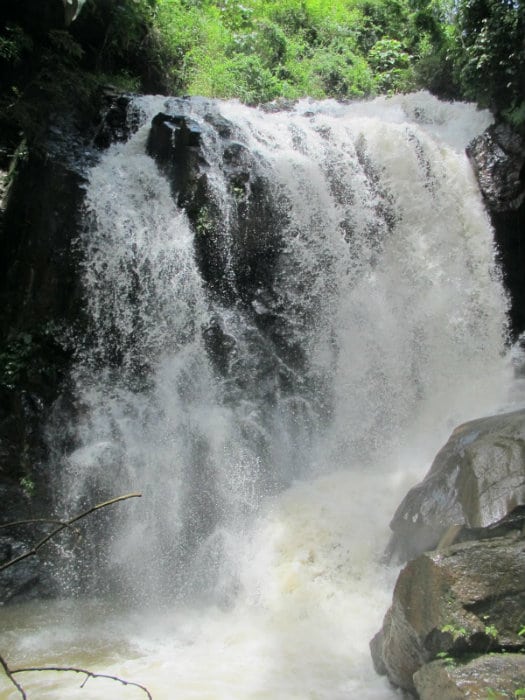 The drive to the falls is said to be beautiful with mesmerising greenery all around and narrow and curvy roads.

Chikklihole Dam is a small reservoir that provides water to local farmers located in a reserved forest. It is locate around 13 km from Kushalnagar on the road which leads to Siddapur town near Dubare Elephant Camp. 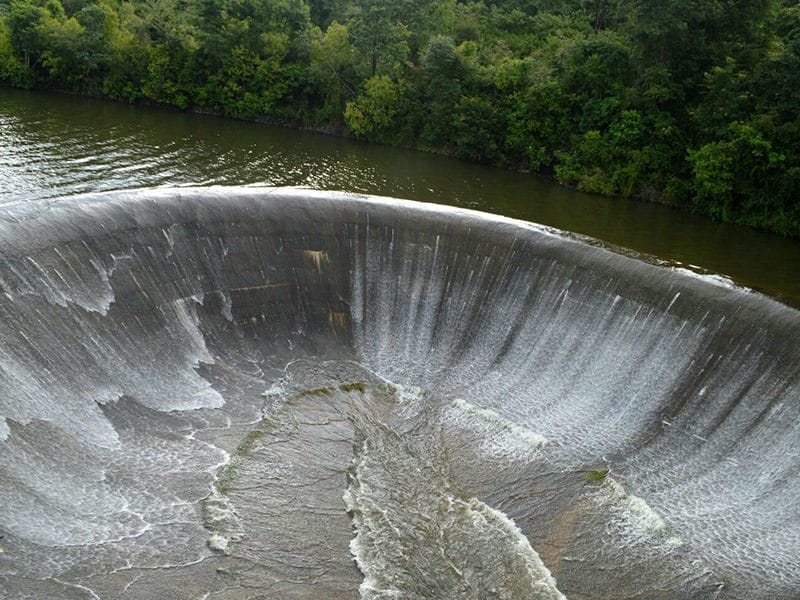 The best place to visit the place is during the monsoon. It is has most spectacular view. It is located around 13 km from Kushalnagar. One has a take left turn at Guddehosur and travel around 9 km to a place called Rangasamudra and take a right where one spots a government school which will lead to the reservoir.

Other Waterfalls to visit…

Burude means skull in Kannada. This waterfall is around 20 km from Siddapur and 55 km from Sirsi on Siddapur-Kumta road. One needs to trek through a small creek to reach the falls in summer. In winter and monsoon it becomes almost impossible to access the valley and falls. Hundreds of people watch the spectacular view of waterfalls from a stage setting. The last stretch of the water fall may be heard. This requires a 2-day stay. 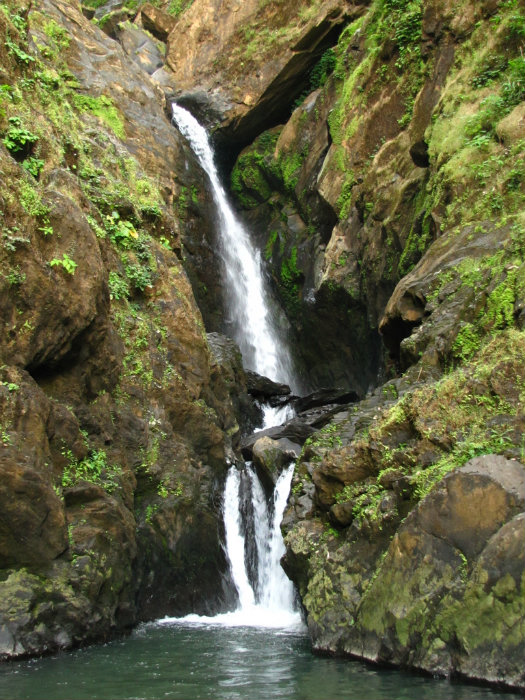 The best time to visit Burude falls is winter and early summer. It can be reached from Siddapur. After Kyadagi you will get down at Ilimane cross then take a walk for around 5 km to reach the waterfall.

Unchalli Falls also known as Lushington Falls, is created by a 116-metre (381 ft) drop in the Aghanashini River. The fall is located near Siddapur in Uttara Kannada District of Karnataka. 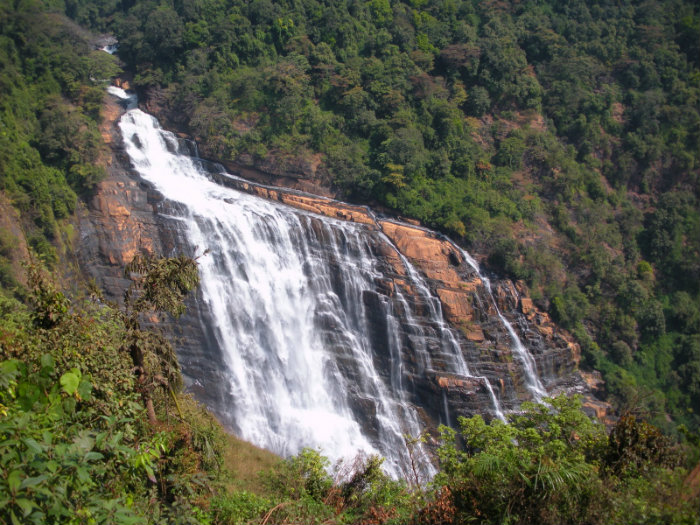 The falls are named after J.D. Lushington, a District Collector for the British Government, who discovered the falls in 1845.

Heggarne, a hamlet in Uttara Kannada district, is 35 km from Siddapur. The falls are reached by a 5 km trek from Heggarne through thick forest. Here, the river makes a cavalcade and leaps into a steep valley to form a spectacular waterfall.