Home » News » ‘Only rightful Constitutional recognition can save Kodavas’ 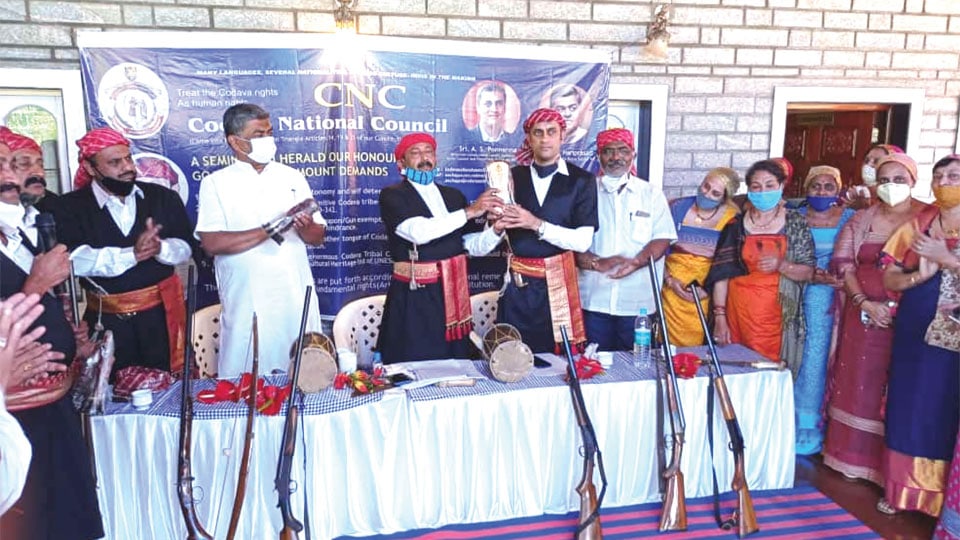 ‘Only rightful Constitutional recognition can save Kodavas’

Madikeri: Kodavas have been agitating for over two decades seeking the grant of their Constitutionally-guaranteed rights and only these rights and privileges can guarantee the survival of this rare community, opined MLC and senior Congress leader B.K. Hariprasad.

He was addressing a seminar on Kodava rights, demands and aspirations. The event was organised by Codava National Council (CNC) at a private resort in Murnad recently.

“Kodava community must get special recognition under Article 371 (k). The community deserves recognition in the Scheduled Tribe list as their lifestyle, custom, traditions, practices and festivals reflect the tribal spirit,” he noted.

CNC’s demand and claim for geo-political Autonomy is most legitimate, logical, feasible and deserving in all sense among any other demands, he opined. The Kodava tribe which is facing the threat of extinction should be enlisted under Scheduled Tribes of the Indian Constitution. “The Government should take measures to protect the tradition of Kodavas. Provision of ST tag is necessary in this regard,” he added.

On this occasion, ‘Codava Rathna’ award was conferred on Hariprasad and eminent jurist A.S. Ponnanna. The main purpose of this award is to recognise and respect those who go out of their way even risking their well-established career for the cause of the Kodava community.

Hariprasad had raised the community’s aspirations in the Parliament and in the Legislative Council. Also, he moved a “Private Member Constitution Amendment Bill 2016” to include Kodava language in the 8th schedule of the Constitution. He advocated the grant of ST tag to Kodavas and also argued that the gun licence exemption should be continued to Kodavas forever and should not be restricted to 10 years.

According to CNC President N.U. Nachappa, certain resolutions were passed at the seminar to safeguard the genus of Kodava tribe and its civilisation. The community fulfils the definition of indigenous people promulgated by the United Nations through various declarations and steps must be taken in this regard to protect it.

“By trait, Kodavas are tribals and by our miniscule size of population, we are a minority in all senses. That is tribal, racial, ethnic, linguistic and national minority. We have every criteria and right to claim for empowerment defined for various indigenous tribes, minority groups and ethno linguistic nationals enshrined in the UN Charter,” he added.

“We are indigenous primitive tribe and it is our fundamental human right and freedom to exercise internal political self-determination right and to have geo-political autonomy in our own defined, indivisible traditional homeland,” he demanded. High Court advocate Lakkavalli Manjunath, Political Science lecturer Dr. P.E. Somaiah and others were present.