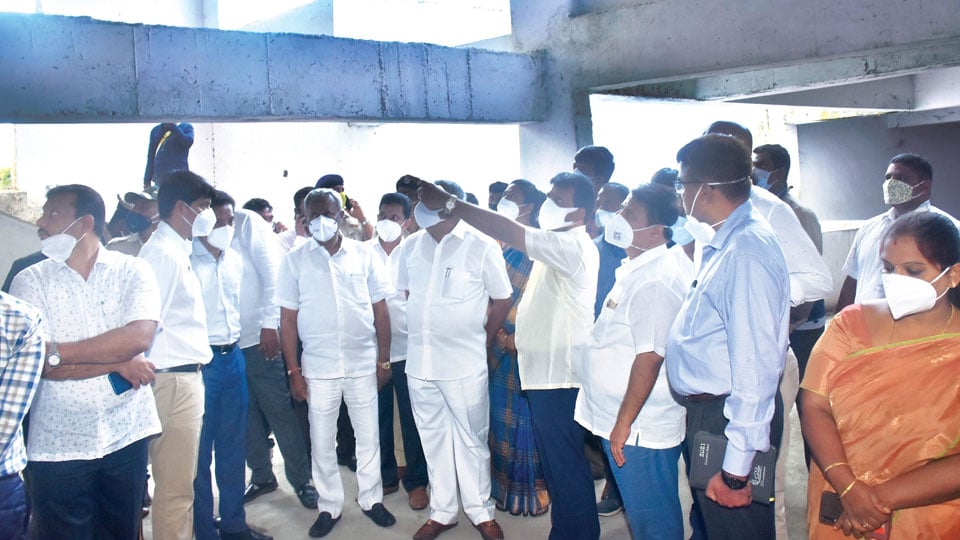 Mysore/Mysuru: If everything goes well, owners of four-wheelers and two-wheelers can safely park their vehicles inside the Town Hall multi-level parking facility in city soon.

After inspecting the multi-level parking area, Urban Development Minister Byrathi Basavaraj directed the authorities of Mysuru City Corporation (MCC) to complete the pending works and make it available to public.

Byrathi, along with Co-operation and District In-Charge Minister S.T. Somashekar, Acting Mayor Anwar Baig, MLA L.Nagendra, Deputy Commissioner Dr. Bagadi Gautham, MCC Commissioner G. Lakshmikantha Reddy and some Corporators, went for the inspection of the basement of the parking facility this morning and found rain water in the basement.

The Minister directed the Corporation Commissioner to immediately call for fresh tenders and get the pending works done at the earliest. “I want this multi-level parking facility to be opened to the general public within 15 days. This will reduce traffic congestion as people park their four-wheelers on roads. There is a provision to park 600-700 cars and around 1,000 two-wheelers in this facility,” he said.

It may be mentioned, a  Hyderabad-based company was given the contract of multi-level parking facility worth Rs. 18.28 crore and the ground-breaking ceremony was performed on April 11, 2011.