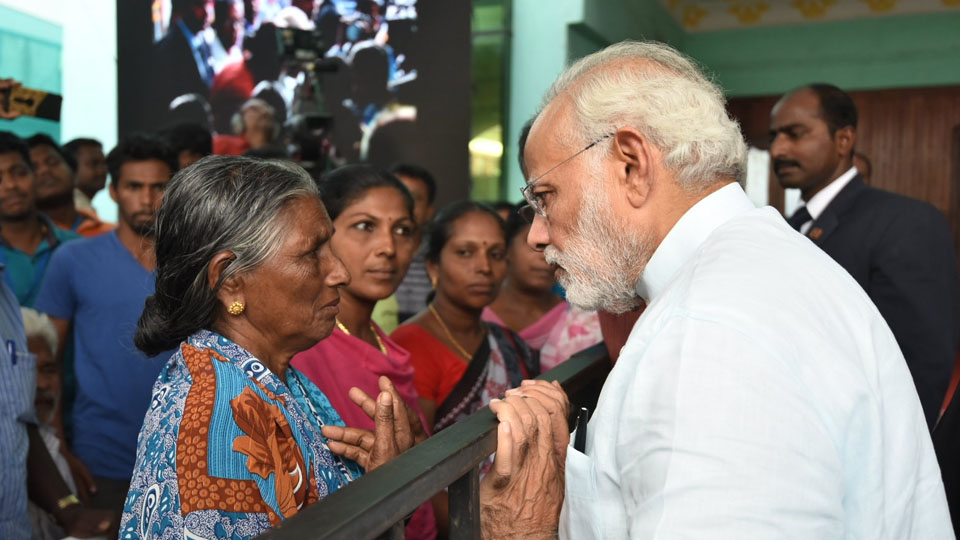 Congress Party must go back to the People from the Dynasty

At a time like this where Indian Democracy is put to severe test of credibility and its future destiny as a Democracy because of the frustrated Opposition Parties, numbering 21, fearing losing the just concluded Parliamentary Elections as indicated by the Exit Polls, it is educative and wise for political pundits to go back in time to the year 1969.

It was a year that had nothing to do with the future of  Indian Democracy but it certainly had the seeds of future decimation and death of the Indian National Congress Party as it existed since its founding in the year 1885 and even after Independence in 1947. This, by not heeding the advice of Mahatma Gandhi to dismantle the Congress Party after Independence. Probably the Mahatma must have had the premonition that the good old Congress Party would continue to dominate the politics of the country to the detriment of other political parties which would participate in the democratic process.

The love and attachment of freedom fighters and the people in general to Congress Party would continue thereby denying opportunities to the new political parties of winning elections. In other words, Gandhiji must have apprehended if the same old Congress Party was allowed to continue, it would monopolise the Indian Democracy. Well, true to his apprehension, that is exactly what happened. Though feeble and without leadership of any worth today, the Congress Party is struggling to keep afloat in the stormy sea of Indian Democracy. To make the situation worse for the Congress, it has a President from the Nehru dynasty who, as TIME magazine described, is “unteachable.” A failed leader.

It is in this context we must remember the year 1969, when Indira Gandhi was the Prime Minister with overweening ambition to be the undisputed leader of Indian National Congress and also to perpetuate Nehru dynasty.

This, however, was not acceptable to the majority of the senior Congress old guards, with S. Nijalingappa as the President of the Party, who were the members of the Congress Working Committee. This led to the conflict of personalities leading to a crisis in the 1969 Presidential Elections — Indira Gandhi supporting V.V. Giri while the majority of Working Committee supporting Neelam Sanjiva Reddy.

Finally, this led to the expulsion of Indira Gandhi from the Party, very significantly, “for fostering the cult of personality” which sadly continues even to this day of lamentation with Rahul Gandhi as the inheritor of the dynasty. Finally, the Congress got vertically split as Congress (I) of Indira Gandhi and Congress (O) of others.

This brings me to the present predicament of the once mighty Congress last evening sitting with 20 other regional and puny political parties to decide the future course of action to combat the predicted victory of Narendra Modi of the BJP.

Remember in 1969-70 what the well-known journalist M.V. Kamath, who worked for Times of India as its Foreign Correspondent for many years and later its Editor, wrote about the fate of the Congress Party ?

Kamath writes: “Ever since the breakup of the old Congress into Congress (I) and Congress (O), the Congress has remained the family property of the Nehrus — a scandalous state of affairs. The Party has to go back to the people where it really belongs.”

Sadly, that scandalous state of affairs continues to prevail even to this day and the Party refuses to get back to the people where it really belongs. Herein lies the Doomsday. The countdown has begun and only a miracle or a new leadership from outside the Nehru-Gandhi family should save the Party for the country and also to rein in the BJP which might get out of control with certain sections of our Secular country.

Be that as it may, if one closely observed the style and tenor of the election campaign, it was clear the Congress wanted a highly polarised campaign between itself and the BJP ignoring other political parties with disdain as if they don’t really matter in the Parliamentary Elections. Congress had launched a multi-pronged attack on the NDA Government and also the Prime Minister Modi personally through social, print and television media so also Law Courts.

It was an exercise in intimidating and harassing the BJP leaders, particularly the Government, to the point of making the functioning of the Government staggering and difficult. Even embarrassing.

Some Judge dies of heart attack somewhere, sometime back and suddenly an NGO finds the cause of action to rush to the Supreme Court and breathe life into what is apparently without  life. The Supreme Court gives a clean chit about the Rafale Deal, but then a Review is sought on the same matter based on an allegedly stolen copy of some documents. The Supreme Court is condescending. There was euphoria and even a sort of celebration in the Congress camp that it made its President Rahul Gandhi gloat over the “victory” and in his rhetorical political speech attributed to the Supreme Court what it never said while admitting the Review Petition.

The result: A Contempt of Court case was filed against Rahul Gandhi in Supreme Court by Meenakshi Lekhi, BJP National Spokesperson. Though he tried to play smart with the Supreme Court, the Apex Court was firm and succeeded in getting an apology. Now that the Exit Polls indicate a rout for the Mahagathbandhan, a new strategy is being worked out in the name of faulty Electronic Voting Machines (EVMs) or the way they were manipulated.

Curiously, the Opposition Parties, specially the Congress, had no issues with EVMs when Congress defeated BJP in the Assembly Elections.

Now, I find the patrons and beneficiaries of Congress Party and the dynasty taking great offence to what Modi said while speaking at a rally in Uttar Pradesh’s Pratapgarh Constituency. Addressing Congress President Rahul Gandhi, Modi had said, “Your father was termed ‘Mr. Clean’ by his courtiers, but his life ended as ‘Brashtachari No. 1’.” The general perception was that very few expected Modi to stoop so low. But, in an election that is sharply polarised, the Congress President was mouthing anti-Modi rhetoric and abuse to the point of ad nauseam, ‘Chowkidar Chor Hai’ and his henchmen were not sparing Modi’s father, mother and even his wife in their utterances and speeches. Naturally, Congress should be prepared to expect similar offending statements in return. After all, as in this physical world, so also in the political world, Newton’s third Law of Motion, “For every action, there is an equal and opposite reaction” comes into play.

Looking at the 2014 results and also of 2019 (according to Exit Polls), it could be said that all the abuses and curses heaped upon Modi seemed to have turned into a blessing.

It must be remembered that the first person to despise and belittle Narendra Modi, the then Chief Minister of Gujarat, was Mani Shankar Aiyar. He had very contemptuously said that ‘A Chaiwala cannot become a Prime Minister. In case he wants, we can give some space in the AICC Office for him to sell tea.’ However, Modi used this jibe to his advantage. It was  a boon ! Everybody knows what happened to Aiyar’s prophecy.

In the present 2019 Elections, Aiyar calls Modi a ‘Merchant of Lies’ because of what Modi said of Rajiv Gandhi in his election campaign rally. Of course, we all remember how Sonia Gandhi described Modi, when he was the Chief Minister of Gujarat — ‘Mauth Ka Saudagar’ (Merchant of Death). Oh yes! Once again it is Aiyar who called Modi as ‘Neech’ and then indulged in rigmarole, when some of his Party members disapproved of it, saying his knowledge of Hindi language is poor etc. However, in 2019, he had approved of his comment  averring it as prophetic.

It is time, leaders and members of all political parties respected the sanctity of the Law Courts and the Election Commission and allowed them to perform their duties without intimidating or abusing them, no matter how high and mighty,  no matter from dynasties. While passing orders, these Constitutional Authorities should not allow political considerations to colour their decisions. Remember a senior advocate asking the Supreme Court to postpone the hearing on the Ayodhya dispute till after the Parliamentary Polls? If the trend continues, there is imminent danger to our country’s Democracy and Secularism.

Tailpiece: A political pundit tells me that should Modi become the PM this time too, the combined Opposition, specially the Congress, would make his life miserable like they did in his first term in Office. He reminded me about Mahatma Gandhi’s dislike for Subhas Chandra Bose when he became the President of the Congress Party for the second time in 1939 and how he was described as a Dictator.